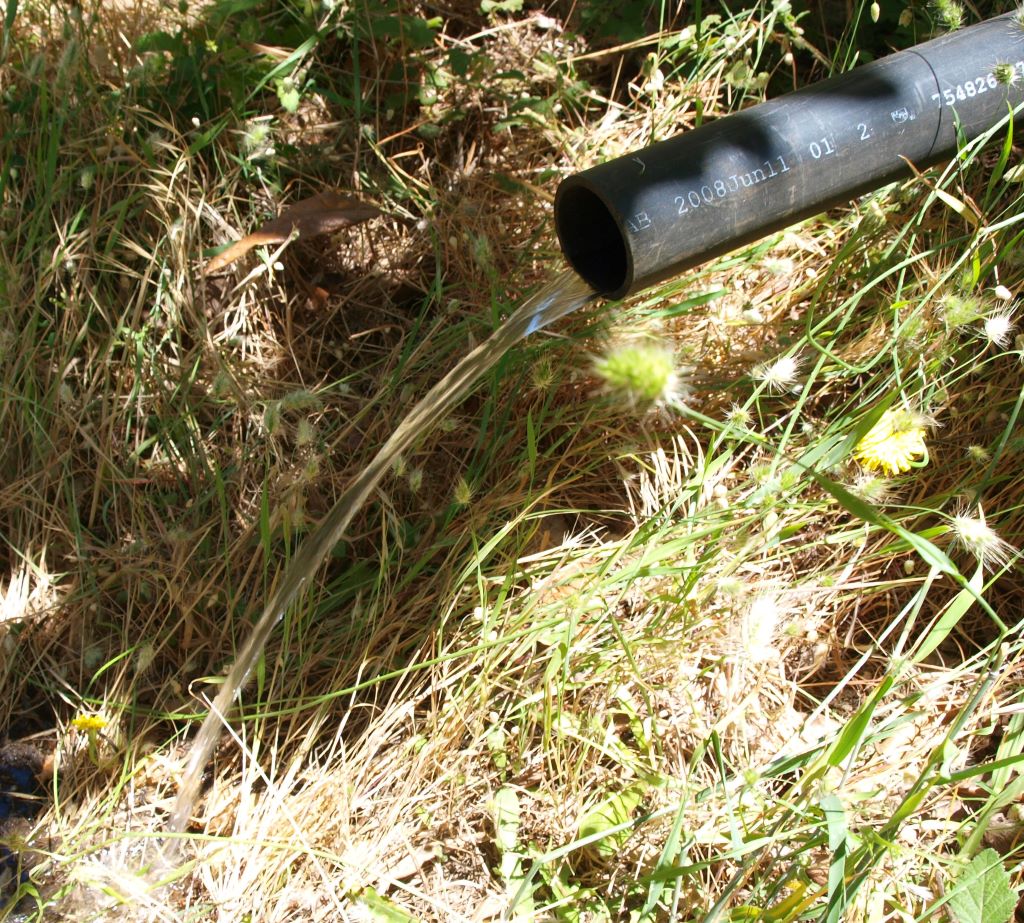 Gray water is any water that has been used in the house, but doesn’t contain sewage (water containing sewage is known as black water – like the security company). Gray water may actually contain minute quantities of sewage, as well as bacteria, viruses and a variety of chemicals so it isn’t completely harmless. However once the water enters the soil, bacteria quickly break down any toxins and render them harmless.

In the years from 1996-1999 the average indoor water use in the United States was around 70 gallons per person per day. In dry climates it is just plain crazy to use this water once and then let it drain away, when it could be your biggest source of free water (you already paid for it). This water is already piped and with a little modification of your plumbing (and some of your more wasteful habits) at least half of it could be re-used quite easily.

The state of California has just recently (finally) seen the logic of gray water re-use and decided to allow it without requiring permits or expensive systems. Even government bureaucrats can see sense sometimes.

It isn’t always necessary or desirable to use gray water in the garden. In areas with ample rainfall all summer it’s better if it goes into the leach field to recharge the groundwater. There is also no point in using gray water in winter, when plants don’t need it. In fact you should switch your system so gray water goes into your septic system at this time (this is legally mandated in California). Otherwise you may just end up waterlogging your soil and cause runoff and pollution.

Gray water should ideally be kept below the surface (usually under mulch) where the bacteria in active soil can break down the toxic chemicals into their component parts (many of which are plant nutrients).

Gray water may contains some thing plants don’t like and generally its better to use it on perennials and shrubs (Willows, Bamboo or Blackberry) rather than annual crops. You might also use it to irrigate fertility crops, such as Reeds or Comfrey, grown in their own special bed. In most places winter rain will prevent any buildup of harmful salts.

If you intend to use gray water for irrigation you can minimize its toxicity by altering your washing habits. Be careful which soaps, shampoos and detergents you use: no boron, high sodium, bleach, water softeners, perfumes or lanolin. Some of the eco-detergents appear to be pretty much harmless to plants, though they do make the water more alkaline.

Gray water is usually used for watering the garden directly, but it can also be purified for use in ponds and other water features. The best known way to do this is with a gray water treatment marsh. This consists of a shallow (12”18”) pond filled with gravel (to prevent mosquitoes breeding) and planted with marsh plants, such as Cattail, Bulrush (Tule) and Reed. These plants have the ability to supply oxygen to their submerged roots, which enables various species of bacteria to grow around their roots. These are able to break down various pollutants and convert them into plant foods. These marshes don’t work in winter because the plants are dormant, but this isn’t usually an issue as we generally have plenty of water at this time. Another  problem with such systems is that the plants use a proportion of the water for their own purposes.

Over complexity is one of the banes of modern life and we should beware of introducing it into the garden. A gray water treatment marsh feeding a pond is a wonderful thing, but it is usually simpler to just use the gray water directly for irrigating plants (perhaps alternating with irrigation of fresh water). You can then use the clean water you saved to supply a pond

Some fungi can be grown in wood chips and the whole mycelial mass can act as a filter to purify water. This system is simpler and cheaper than a treatment marsh and doesn’t consume as much water (it does require some expertise though).

If you produce a lot of gray water you should reorganize your household plumbing, so that it can be more easily re-used when it comes back out.

The cleanest gray water is that wasted while waiting for the hot water tap to get hot. The next cleanest comes from the shower and bathtub, then the washing machine (make sure you use eco-friendly detergent) and finally the kitchen sink. The latter is rich in nutrients, but very dirty (from grease and oils and food particles) and has the most potential to cause problems. You could have 2 separately plumbed sinks in the kitchen, one for relatively clean tasks like washing vegetables and another for the dirty jobs. You could also wash your vegetables in the garden sink outdoors. This fairly clean water can go directly onto the garden.

An easy way to re-use gray water is to build an outdoor shower or bathtub. This allows you to reuse the water in hot weather when you need it most. Another easy way is to direct your washing machine water into the garden. You might have several perforated pipes buried in different locations and simply move the discharge hose as necessary.

You may want to draw up a plan of how the gray water is to be used. Draw out where you are tapping into the house plumbing, where the pipes will go and which garden areas they will supply. This isn’t complicated, but it helps you to visualize what needs doing and where. How to get the pipes from A to B (through the foundation?) How to get gravity flow. Where to bury pipes so you don’t trip on them or see them (and can drain them in winter). A plan may also help you find them again in a few years time.

It is very important that gray water is used immediately and not stored for any length of time, otherwise bacteria will start to grow and it will smell bad.

I have found two useful books on using gray water for irrigation, written by two inspired individuals, Art Ludwig (Branched Drain Greywater Systems: A Supplement to Create an Oasis with Gray water, Oasis Design 2000) and Robert Kourik (Gray Water Use in the Landscape, Metamorphic press 1988). Both systems start with a diverter valve that allows you to run water either into the septic tank (in winter when you don’t want it in the garden) or out to the gray water system in summer.

Robert Kouriks system consists of a pipe that runs the water into a surge tank (a 50 gallon polyethylene drum works well). There is a washable screen to remove any solids. The bottom of the tank has a tap connected to a hose, which runs the water to any one of a series of buried 10 foot long perforated pipes that act like mini leach fields. You could also just run the hose to mulch basins surrounding trees.

Art Ludwig came up with the branched drain idea, as a foolproof no-maintenance system. This simple system relies on gravity and uses large enough pipes (1 ½ minimum) that they don’t get clogged. The gray water is diverted through a series of branched pipes that split the flow and direct it to different areas of the garden. It then flows out into mulch basins (often around trees). The mulch keeps the gray water covered and prevents many problems.

Ludwig recommends that the discharge should be in the air, so solids don’t accumulate and back up to block the pipe. There should also be clean outs where necessary, in case something does get clogged.

When you are ready to assemble your system you should cut and lay all the pipes out on the ground in place and dry fit all the connections. This will help you to work out any problems. Plastic pipe is pretty easy to work with, but its still best not to glue anything until the end. Expensive fittings such as valves can be glued with silicone caulk rather than glue (this allows them to be taken apart and reused if necessary).