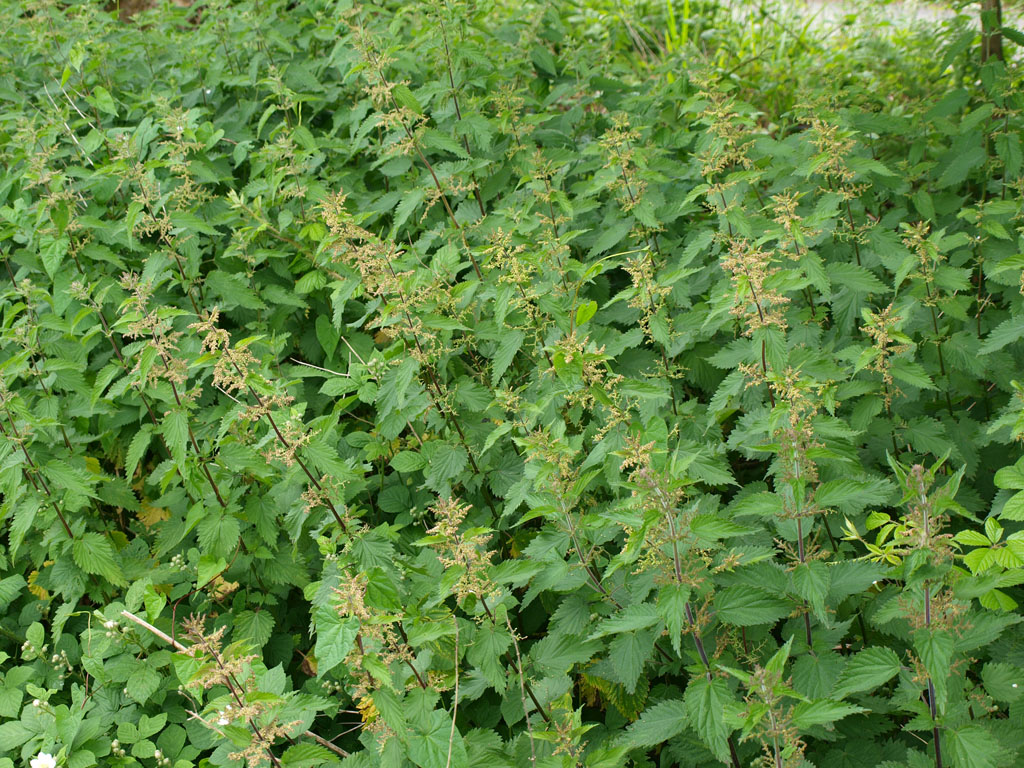 The Stinging Nettle has all of the attributes of a valuable wild food plant. It is highly nutritious, easy to identify, doesn’t resemble any poisonous plants, is widely distributed, very vigorous and often available in abundance. It also tastes good enough to have been cultivated as a food crop.

The specific name is derived from the Latin word Ure, meaning burn, while the common name Nettle is from the Anglo Saxon word for needle. These names are a good clue to the plants most obvious asset (as is the word “stinging” of course. The Nettle is covered in tiny hollow hairs which act like hypodermic needles. When these are  brushed against they inject a stinging substance containing formic acid. For this reason the plant is avoided by most mammalian herbivores (though not insects, it is a very important food plant for many of them).

The sting of the Nettle is unpleasant, but usually wears off fairly quickly and it is a lot less irritating than Poison Ivy. Apparently some tropical Nettles can immobilize one for days and perhaps even kill.

Nutrients: The Nettle has a good reason for protecting itself as it does: this tasty herb is one of the most nutritious of all green plants. It contains more protein than almost any other green leaf, large amounts of chlorophyll, vitamin A, several B’s, lots of C and D and an abundance of minerals including calcium, iron (one of the richest plant sources), manganese, phosphorus, potassium, silicon and sulfur.

Gathering greens: The drawback to the use of Nettles as food is that they are only edible when young, for a short time in early to late spring. Not only does the plant get tough as summer progresses, but inedible crystal deposits form in the leaves.

You need to protect your hand when gathering, so wear gloves (or anything that comes to hand).

Preparing greens: Obviously this ferocious plant can’t be eaten raw, but it actually takes only a few seconds of cooking to render the sting impotent and only a few minutes of boiling, steaming or stir-frying are necessary to produce an excellent potherb. The greens can be used as a substitute for Spinach in any recipe.

The dried powdered leaves have been added to bread, soups and sauces to increase their nutritional value.

Winter greens: The roots have been taken indoors in autumn and forced like Chicory to produce winter greens (see Cicorium for more on forcing).

Drink: The dried leaves can also be used to make a nutritious tea. This is usually mixed with tastier herbs, to improve its flavor. In Europe the young leaves are used to make a very palatable soft drink called Nettle Beer.

Rennet: Fresh Nettle juice has been used like rennet for making cheese.

Medicine: The plant has traditionally been used as a detoxifying spring tonic, so it’s interesting that it contains secretin, a substance that helps the bowels to eliminate mucus. It has also been used to treat arthritis and gout.  It was thought to stimulate the kidneys, gall bladder, prostate gland, liver and digestive tract. The greens are a mild laxative and its high nutritive value makes it a useful food for invalids and those suffering from anemia.

The fresh juice and powdered leaves have been used externally as a styptic wound herb. The sting was thought to be beneficial for treating rheumatism, stiff muscles and frostbite. Freeze dried nettles has been found to reduce the symptoms of hay fever.

Nettle rash: The plant is frequently the cause of injury in the form of Nettle rash. The traditional treatment for this is to rub the affected area with the crushed leaves of soothing plants, such as Dock (Rumex), Jewelweed (Impatiens), or Mugwort (Artemisia).

Fiber: Nettle is closely related to Indian Hemp (Apocynum) and like that plant it is an excellent source of fiber for cordage, rope, netting, paper, sail cloth, sack cloth and even fine fabrics (it was said to be better than Flax). The fibers can be extracted and prepared in the same way as Flax (Linum). Nettles were among the most important fiber plants for Native Americans.

Animal food: For obvious reasons animals avoid fresh Nettles, but the dried plants lose their sting and are a valuable animal feed. Nettle hay is actually too rich in protein (about 25% dry weight) to be used alone, so is added to other feed as a nutritional supplement. It is said to increase the disease resistance, weight and general health of cows, poultry and most other animals. Gypsies once fed Nettles to horses to improve their appearance prior to sale.

Other uses: The dark green leaves have been used as a green dye and as a commercial source of chlorophyll.

Companion Plant: Stinging Nettle is considered to be one of the best companion plants for the garden. When grown with aromatic herbs such as Valerian and Mint, it is said to increase their production of aromatic oils. It is also believed to make neighboring plants more resistant to disease and attacks by insect pests.

Cultivation: With so many valuable uses for the plants, they are well worth having around the garden. It has occasionally been cultivated as a perennial potherb. If you are lucky you will have it (or a Related species) growing nearby, in which case you can divide and transplant some (or take root cuttings), otherwise you will have to grow your own from seed. The plants like rich moist soil and will grow in full sun or deep shade. Their high chlorophyll content enables them to grow with as little as ten percent of daylight.

Nettles can be invasive, so it is best to put them somewhere they can be allowed to run wild and won’t sting too many people. It has been suggested as a possible cover crop for orchards. An ingenious gardener might use the plant to deter intruders, especially children, or to keep people from getting too near especially cherished plantings.

Fertilizer: Stinging Nettles love nitrogen rich soils and often their presence indicates the site of old human habitations, such as animal pens, dung heaps or abandoned privies. The plant enriches the soil it grows in, as its leaf litter decays into especially rich humus (with an abundance of nitrogen, potassium and other minerals). It was once said that you should plant fruit trees where Nettles grow abundantly.

Biodynamic gardeners have an especially high regard for the plant and use it in many of their formulations. You can make an excellent liquid fertilizer from Nettles (See Symphytum for the details of this). The same liquid (or the whole plant) is said to stimulate fermentation in the compost pile.

All native Urtica species can be used in the same ways, though they may not be as good.

The roots of this species are edible.