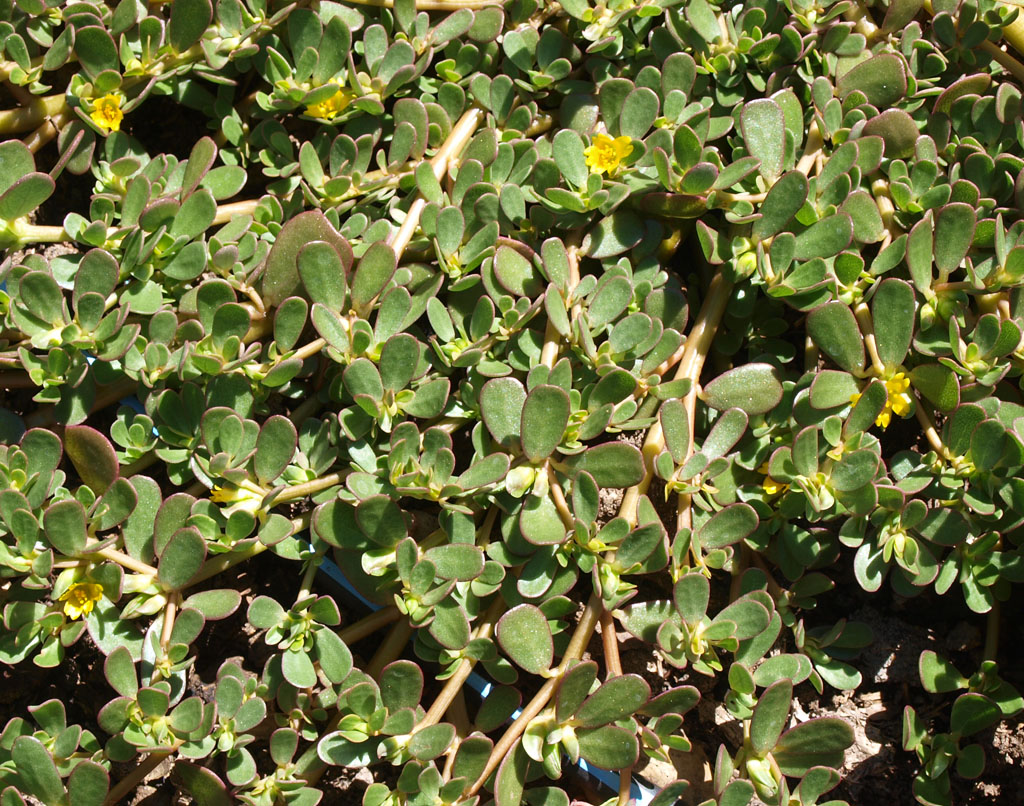 Purslane is native to the warmer parts of Eurasia, but has made itself at home in most countries of the world (including most of North America).

Caution: Purslane is rich in vitamins A and C and iron and is one of the best plant sources of omega 3 fatty acids. It also contains oxalic acid, so shouldn’t be used excessively.

Greens: Purslane is such a good food plant that it is cultivated in many countries. Gather the tender new growing tips by pinching them off the plant. This will encourage the plant to put out more of the same, so you can take several harvests from a single plant in the course of a summer without harming it (though as a common weed you may want to harm it.)

The slightly sour tips are good raw in sandwiches and salads, or can be boiled as a potherb. In China they are stir fried, added to soup and pickled. If you object to the mucilaginous quality of boiled Purslane, then try frying, or baking the tender tips with egg and breadcrumbs.

Seed: Purslane seed can be ground to flour and used alone, or mixed with equal amount of wheat or other flour, for gruel and baking, It can also be sprouted like Alfalfa. Though the individual seeds are small, a single plant may produce as many as 50,000 of them, so it is possible to accumulate a useful quantity.

There is also a useful shortcut to gathering the seeds. The fleshy plants contain enough moisture to flower and set seed after being uprooted. In fact uprooting may actually stimulate the plants to produce seed. All you have to do is gather the plant tops and leave them in a paper bag, in a warm dry place, until they dry up. You then simply crush the seed heads and collect the seed.

Medicine: The leaves  have been used as a soothing poultice for burns, wounds and sore eyes. When eaten in quantity they are mildly laxative. Apparently they also contain a substance that kills dysentery bacteria.

Cultivation: Purslane has a long history of cultivation in its homeland and improved varieties are available. However in this country most gardeners are only interested in eradicating it, the idea of actually planting this vigorous weed sounds downright foolish. There is some justification for this, as it can be a bad weed if it gets out of hand. This is unfortunate though, because Purslane is also a good food crop. It grows well with pretty much no attention and is as good as any food plant you are likely to buy. In my first garden it took several years of careful neglect before I had enough Purslane growing in my garden to satisfy my needs. In later gardens I have come to have a greater appreciation of its weed status.

If you have a vegetable garden and warm summer weather, there is a very good chance you already have Purslane growing as a weed, or soon will have. It appears in disturbed garden soil as if by magic, because the seed may lay dormant in the soil for up to forty years, waiting for suitable growing conditions.

The key to controlling Purslane is not to let it set seed, otherwise a huge bank of seeds will quickly build up in the soil. You can only do this by regular and conscientious weeding. Don’t leave the uprooted plants on the soil after weeding, as they will either re‑root themselves or set seed (or both).

Purslane is easily grown from seed or cuttings and prefers full sun and rich, well-drained soil. The fleshy, moisture filled leaves enable it to thrive with very little water. It can’t stand cold weather and in cool northern areas doesn’t even appear as a weed until midsummer.

New crop: Purslane has potential as a commercial food crop, once people find out how good it is. I have seen it for sale at Mexican vegetable stalls at our local flea market. The easiest way to use it would be in mixed salad greens.