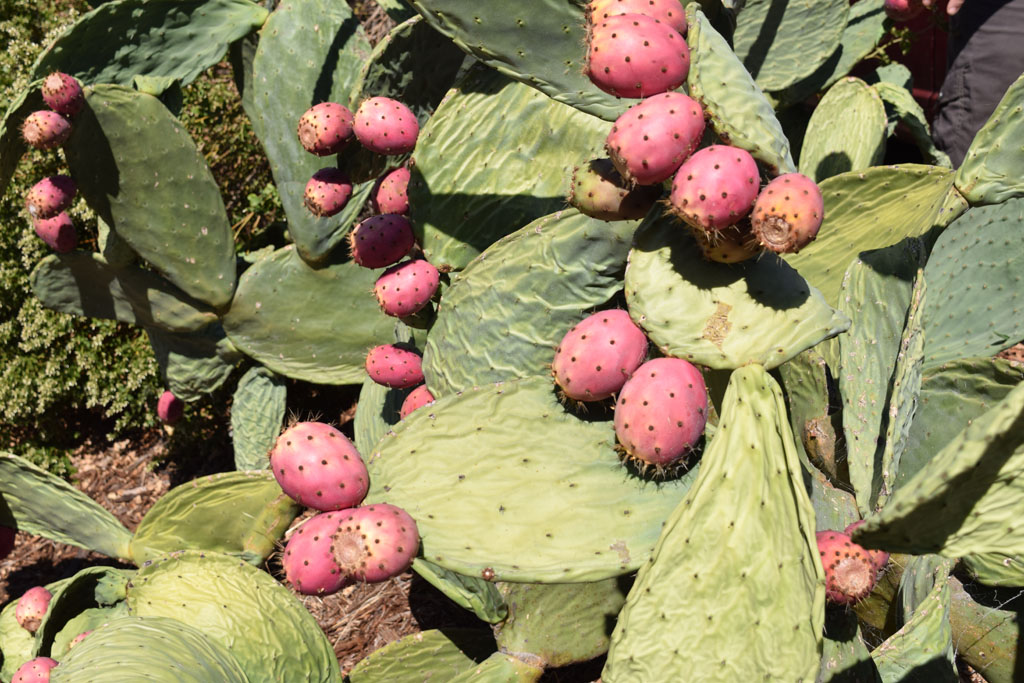 The Opuntias are the weeds of the Cactus family. Unlike most of their cousins, they are relatively fast growing, opportunistic and short-lived (though they may still live for twenty years). They are undoubtedly the most useful Cactus species for foragers, as they are widely distributed, common, rugged, easily recognized and provide a variety of foods. We usually think of cacti as being desert dwellers, but there are Opuntia species growing in almost all of the lower 48 states and even parts of Canada. They are becoming increasingly common on overgrazed land in many areas, and are often considered to be problematic weeds.

History: These species are native to the Americas, but have traveled widely around the world and are naturalized in Australia, Africa, the Mediterranean and elsewhere.

The story of their introduction to Australia is one of the classic examples of a human ecological blunder. The first Prickly Pears were introduced into Australia in the 18th century, with others following in the 19th. Free of the predators that constrained them in their native land, they began to spread uncontrollably and by 1925 they covered as much as 60 million acres of land. Much of which was well watered and potentially valuable for other purposes. On half of this land they were practically the only plants and in some areas an acre might contain 800 tons of vegetable matter.

This situation was eventually brought under control by the introduction of the Argentine Moth borer (Cactoblastis cactorum). The larvae of this moth eats into the pads and almost totally destroys them. These and other Cactus eating insects, eventually reduced the densely packed stands by up to 95%. The plants are still common in Australia, but not out of control, so the story has a happy ending. This episode is often cited as an example of successful biological control of a serious plant pest.

Caution: Like most Cacti, the Opuntias are well armed, often with both simple spines and the more insidious glochids. Glochids are tufts of tiny barbed bristles that embed themselves in anything they touch, causing irritation and pain. You don’t even need to touch the plant directly to be impaled, a shoe or bag brushed against the plant will become covered in these bristles and when you touch the object they are transferred to you. The larger spines are easier to avoid, but can be pretty nasty. If left in the skin they may work themselves in deeper, like Porcupine quills, and can cause infection. Obviously humans can remove them fairly easily, but animals can be crippled, or even die from them.

If you get the glochids in your skin, scrape them off with a razor or knife; the small amounts remaining in your skin will go away on their own. The best way to remove the spines from your flesh is said to be pulling them out with pliers! If a whole Cholla joint (pad) gets stuck to you try inserting a comb between skin and joint to pull it off, or cut it off with scissors and pull out the spines.

Food: No Opuntia species is poisonous, though the quality of the food produced by these plants varies considerably, according to species, growing conditions and other factors, so you must experiment to find the best. The plants were an important food for some Native Americans because they give a variety of foods over a long period and start producing food in early spring when few other green foods are available.

Gathering pads: The young pads are best eaten when from 2 ‑ 3 inches in diameter. They are known as nopalitos in Mexico and are actually cultivated there. They are becoming increasingly common in food markets across this country, as people become more adventurous in their eating habits. Native Americans gathered the pods in early morning when still wet with dew, as this apparently made the glochids less troublesome. If you don’t have any gloves, gather them (or the fruit) with tongs improvised from sticks.

One must disarm the pads before use, a task most easily accomplished by scraping or skinning them. Sometimes the glochids can be removed by brushing.

Using pads: The cleaned pads can be eaten raw in salads, boiled (this makes them easier to peel), pickled or dried. A simple cooking method is to put the whole pads on the coals of a fire for about twenty minutes (turn them over half way through). This burns off the spines and cooks them at the same time (trial and error is needed to cook them just right). When prepared in the ways mentioned above the pads tend to be rather slimy and not to everyone’s taste. If you find them too slimy, try cutting the peeled pads into strips and frying them in breadcrumbs or batter, with Garlic or Onion.

Flower buds: Native Americans removed the spines by stirring them in baskets with stones (its simpler to use a stiff brush). The cleaned buds can be boiled for about 15 minutes and eaten as a vegetable. Often they are added to greens such as Saltbush (Atriplex). They sometimes baked the cleaned flower buds, pads and fruits in a fire pit overnight. They also dried and ground them to flour for gruel, baking or storage.

Preparing fruit: The succulent fruits, known as tunas, are commonly eaten, though their quality varies a lot with species. It is best to brush the glochids from the fruit when gathering and disarm them later, in the same way as the pads (some types are almost spineless). Skinning is usually the easiest method, simply impale the fruit on a fork, slice off the top and bottom, make a slit from top to bottom and roll off the skin. Make sure no glochids are stuck to the skinned flesh (immersion in boiling water makes skinning easier).

Using fruit: These are often good raw, but contain a lot of hard seeds. These can be removed by cutting the fruit in half and scooping them out, or you can eat them whole and spit out or swallow the seed.  The cleaned flesh can be used to make preserves, syrup, juice, wine and candy. Native Americans baked the fruit in a fire pit and dried it for later use. They used to say that eating too many of the fruits could make a person sick, so use in moderation.

Seeds: Native Americans ground the seeds to meal for baking and gruel. See Saguaro (Cereus) for more on the uses of Cactus seed.

Drink: As with other Cacti, the fruit and pads have been used as a source of water (or more properly moisture), by desperate people in time of need. The fruits have also been fermented like those of the Saguaro to make wine.

Medicine: The split pads were used as a poultice for wounds. The fruits are laxative and diuretic and may occasionally color the urine red (an apparently harmless, if somewhat alarming phenomenon).

Animal food: The juicy pads are very attractive to thirsty herbivores, which is why they have spines of course. The pads of some species have been used as livestock feed in time of drought, after their spines were singed off. I have read that animals have relied on such plants as their sole source of food and drink for months at a time. I don’t know whether to believe it however, as it would seem difficult to remove all the spines.

The fruit is often eaten by desert animals and the seeds are dispersed in their droppings.

Alcohol: Some Opuntia varieties are extremely productive sources of fruit, producing up to 30 tons per acre. These contain about 15% sugar and could be fermented to produce alcohol. The pads might also be used in the same way.  This could make the plant a useful source of fuel alcohol.

Mucilage: Native Americans soaked the pads in water and used the mucilaginous juice as size for painting (or they simply rubbed a cut pad onto the paint).

Waterproofing: In Mexico this juice has been used for making whitewash, paint and waterproofing, especially for adobe walls. It is now being used experimentally to coat cob (earth) walls, as it appears to allow them to breathe while at the same time shedding rainwater.

Tattoos: Native Americans used the larger spines for tattooing, with charcoal as the pigment.

Horticultural uses: Opuntias have beautiful flowers and fruits, an attractive and striking form and are extremely heat and drought resistant. These features make them popular ornamentals in desert areas. Hardier species can be used to add an exotic touch to northern gardens.

Some species are grown as a crop for pads, fresh or dried fruit, or for making preserves.

The Opuntias are very independent and need little attention once established. They are sometimes planted as barriers to keep out animals (both human and non-human) and their spines are a very effective deterrent. They have also been planted as windbreaks or fire retardant ground cover, as the fleshy pads don’t burn readily.

Cultivation: These species have almost magical powers of vegetative propagation. Break off a pad, throw it on the ground and it is able to take root. You can quickly get as many plants as you need by rooting them in light sandy soil. They can also be grown from seed (nick with a file or scarify to break through the tough seed coat), though as with all Cacti this is quite slow. They may take 3 ‑ 5 years to bear fruit from seed.

New crops: Luther Burbank apparently spent 15 years growing several million Opuntia seedlings in a quest for spineless plants with perfectly smooth pads. He said this was the most difficult and painful (literally) project he ever undertook. He claimed an acre of his fast growing spineless hybrids could produce up to 300 tons of vegetable matter within three years and 30 tons of fruit annually. He intended this spineless plant to be used as a perennial livestock food for arid areas, as they grow vigorously where few other plants can survive. He also proposed that such plants be cultivated in areas subject to periodic famine, as a reserve of food for emergencies. He was rather over‑enthusiastic in his promotion of the plant and it never became very popular. One reason was that the plants have low value as feed for livestock. Another problem was that seedlings from the plants aren’t spineless and have the potential to become a pest.

Opuntia species hybridize readily, which can make identification difficult, but this isn’t important as no species is poisonous and any with palatable parts can be eaten. The genus is divided into two distinct types, the Prickly Pears with flat pads and the Chollas with cylindrical ones.

These species all produce good fruit. The last two species have been cultivated as fruit crops.

These species are now usually given their own genus Cylindropuntia, but I am including them here for convenience sake. Generally they are less useful as food, though they provide edible flower buds and fruits (sometimes the pads were eaten in times of scarcity).

The flower buds of these two species were particularly prized by Native Americans.