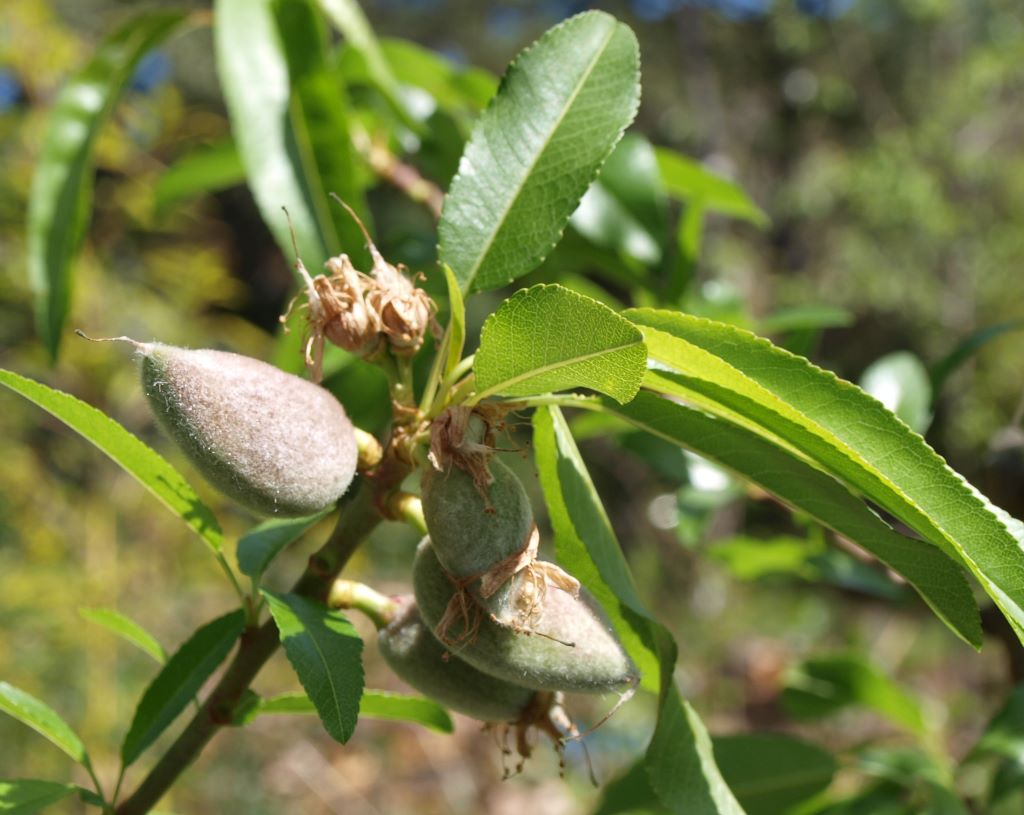 Almonds are quite spectacular when blooming in spring and in the right conditions they can be very productive.

Ease of growing: In a suitable climate the almond is quite easy to grow.

Climate: Almond likes hot dry summers and doesn’t do well in areas with high humidity. It is quite hardy, but flowers very early (February in my garden) and so is vulnerable to late frosts.

Almonds will grow in a variety of soils, so long as they are well drained (and not saline).

Site: Almond needs full sun and does best in a warm climate. It can only be grown in cooler climates if it is given a warm microclimate, such as a south or west facing wall. The flowers and immature nuts are vulnerable to late frosts, so trees should be placed well away from low lying frost pockets or frost dams. If your soil isn’t very well drained you might consider planting on a hillside, or on a mound.

Heeling in: When you get your plants home it is a good idea to get them in the ground as soon as possible, but if this isn’t possible you should heel them in, which means placing them in a trench (this trench has one vertical side and one at 45 degrees, the trees being laid in at 45 degrees and soil is firmed over them to fill the trench). If you buy plants mail order you should unwrap them immediately and soak the roots in water overnight before planting or heeling in.

In mild climates Almond trees can be planted at any time from late fall to early spring. In colder climates they are usually planted in spring. As with most other plants a small tree transplants better than a large tree and will do better in the long run.

Maintenance: The almond is a fairly low maintenance tree, though it is vulnerable to some pests.

Fertilizing: Almond is a fairly light feeder and if it is growing well (producing 9” or more of growth in a year) it doesn’t need fertilization. If not you could give it a feed with?

Watering: I found out how drought tolerant the almond is a few summers back when I went away after forgetting to tell the house sitter to water the Almond tree sitting in a pot out in the garden. When I came back two months later it was just a dry stick, but when I gave it water it leafed out like nothing had happened. It is now 20 feet tall and none the worse for the experience. Of course this doesn’t mean you should neglect the trees, they will produce a lot more nuts if occasionally watered deeply.

Mulch: A mulch of compost is the best way to fertilize and also helps to conserve water.

Pollination: This small tree differs from most nuts in that it is related to the Peach and Plum and is pollinated by bees. Generally you need two compatible varieties for cross-pollination, though a few are self-fertile (though even these do better if cross-pollinated).

Pruning; Almonds don’t need much pruning once they have their basic shape (which is an open center or vase shape). Just remove diseased or dead wood. Prune like peach?

Propagation: Selected varieties are budded or grafted on to desired rootstock. If you have a small garden it is possible to have two or more varieties on one tree.

Pests: Almonds may be affected by most of the same pests and diseases that affect its cousin the peach, but not usually as badly.

Birds: Some birds will eat the nuts.

Containers: In colder climates dwarf almond trees can be grown in containers and brought inside for the winter.

Harvest: Harvest the nuts when the dried up fruits start to split open. If you leave them too long the nuts will fall, or Squirrels may get them. Remove the nuts from inside the husk and dry them until fully dry (a dry kernel rattles in the shell and will snap if broken.

Storage: Thoroughly dried almonds can be stored for up to a year.

Landscape uses: With its large pink flowers the almond is one of the most spectacular food producing trees.

Unusual growing ideas: Almonds are so closely related to peaches they use the same rootstocks (they can even be grafted on to the same tree).