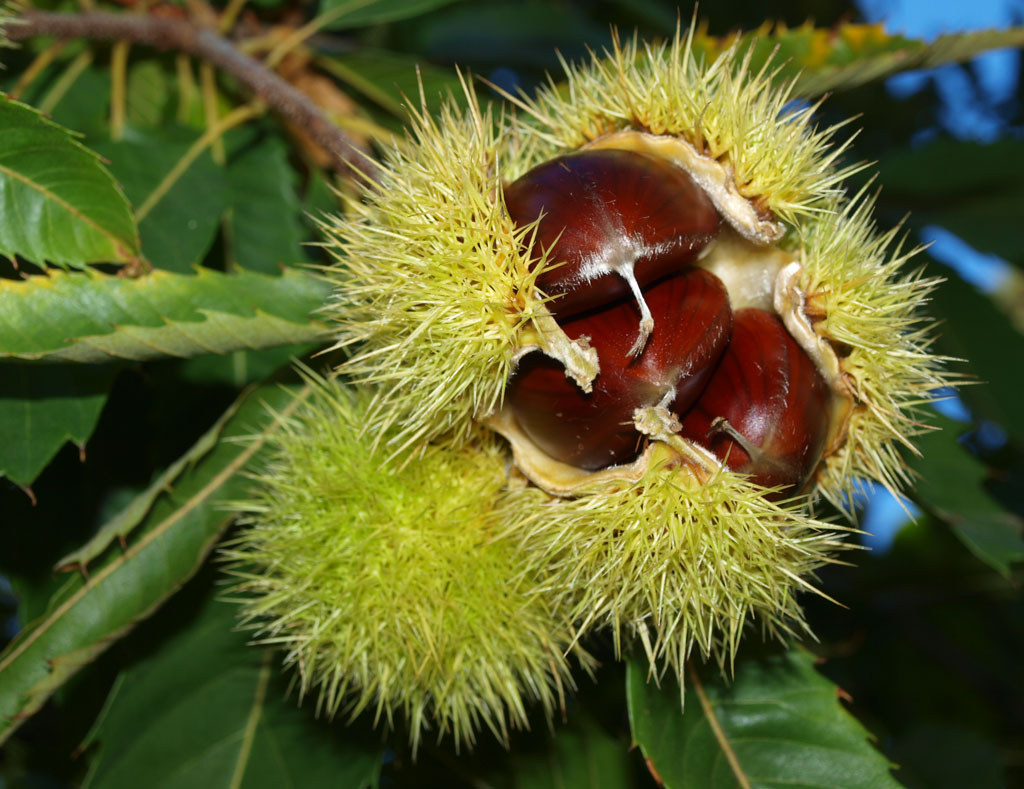 The sweet chestnut differs from most of the fruiting trees discussed here in that it is a big, beautiful forest tree. It is something you might think about planting if you have a lot of room and have planted everything else you want.

I really got into Chestnuts when I moved to my present land and found several trees already growing here. They were fairly small when I moved here but have grown rapidly and now provide a significant annual harvest.

Nutrients: The nuts are different from most nuts in that they are low in protein and fat, but very rich in complex carbohydrates. They also contain fiber, manganese, potassium, phosphorus, iron and vitamins B2, C and E

Ease of growing: If you give them the right conditions few plants are as easy to grow as chestnuts. I don’t do anything at all except harvest the fallen nuts. They produce a crop of nuts regularly (in my garden they haven’t missed a year yet) and can be amazingly productive.

Chestnuts are hardy to about –20° F, but their preferred climate is Mediterranean hills (to 4000ft) with mild winters and hot summers. They are very drought tolerant and have essentially naturalized in gardens around here.

Site: The chestnut is significantly larger than most food bearing trees and will only work in a large site. It needs full sun for best production, but small trees are quite shade tolerant.

In mild climates chestnuts can be planted at any time from late fall to early spring. In colder climates they are usually planted in spring. As with most other plants a small tree transplants better than a large tree and will do better in the long run.

Maintenance: Chestnuts don’t need any attention once established, though when they start fruiting you may want to rake up the spiny burrs after they have all fallen (they compost easily).

Watering: Mature trees are quite drought tolerant and have deep roots that can search out water. The trees in my garden produce well without any irrigation at all.

Of course newly planted trees will probably require some water in their couple of years, until they get established.

Pollination: Chestnuts are cross-pollinated by the wind, so you need more than one tree to produce fruit. The flowers appear in summer, long after any frost danger has passed.

Pruning: Chestnuts are terminal bearing, which means they produce fruit at the end of new growth. They can be grown without pruning, though you may need to remove some lower limbs to allow more light to get through to the ground (their foliage is very dense).

Propagation: Chestnuts are easily grown from fresh seed (they lose viability rapidly as they dry out) and self-sown (or squirrel sown) seedlings appear all over my garden. These grow very fast in the right conditions, but may take 10 years to start bearing much fruit. Improved cultivars can be grafted and usually bear at an earlier age. Cuttings.

Mulch: A mulch of compost is useful to keep the ground moist, and supply nutrients.

Some people dislike having fruiting chestnut trees in the garden because of their painfully spiny husks (my dog is reluctant to walk on them). If you want to use the area underneath the trees, it is a good idea to rake them up as they fall and compost them (they break down very quickly). These spiny husks serve an important function as they effectively prevent squirrels from eating the nuts before they are fully ripe.

Pests: So far they have been completely pest free in my garden, but in less favored areas they have their problems.

Chestnut Blight: Unfortunately it isn’t possible to grow European or American Chestnuts in the eastern part of the country because they are susceptible to Chestnut Blight. This introduced disease wiped out almost all of the American Chestnuts in its native range (this has been called the greatest ecological disaster in American history). Fortunately we can still plant the smaller Japanese and Chinese Chestnuts, as they are resistant.

Harvest; When the nut is ripe the spiny burr splits open and falls to the ground (which is good because they would otherwise be pretty inaccessible). The nuts often fall out on their own, but if they don’t just roll the husk under your foot to release the nuts. A ripe nut is chestnut brown (presumably this is where the name of the color comes from). The burrs are covered in needle-like spines and are pretty uncomfortable to handle. It’s a good idea to go out at least once a day and pick up the fallen nuts otherwise rodents will take them.

Storage: The fresh nuts deteriorate quickly and should be treated more like a vegetable than a nut. They can be stored in a perforated plastic bag, in the fridge, for up to a month. For longer term storage they can be dried.

Landscape uses: This is a big and beautiful shade tree. It is quite fast growing, but still takes at least 10 years before it starts to supply much shade.

Other uses: Chestnut wood is strong and rot resistant and has been called the most useful temperate hardwood. The trees produce little sapwood and so are rot resistant even at a young age. They have long been prized for use as fence posts.

Chestnut trees can be coppiced to provide poles for garden use (coppicing means cutting down the tree at ground level and allowing it to resprout and send up new poles). The new shoots grow very rapidly on their already established roots (my tallest shoots have grown 10 ft this summer) and can be cut every 3-10 years (depending upon the climate and the size poles needed). You can coppice any tree that gets too big for the garden and allow it to start all over again.

Food uses: Unlike most common nuts, chestnuts are high in carbohydrates rather than protein or fat and in the kitchen they are treated more like a cereal than a nut.

The nuts are commonly roasted, boiled or ground into flour for baking.

There are four important chestnut species and all have been extensively hybridized, unfortunately most improved varieties are hard to find. The only commonly available one is Colossal.