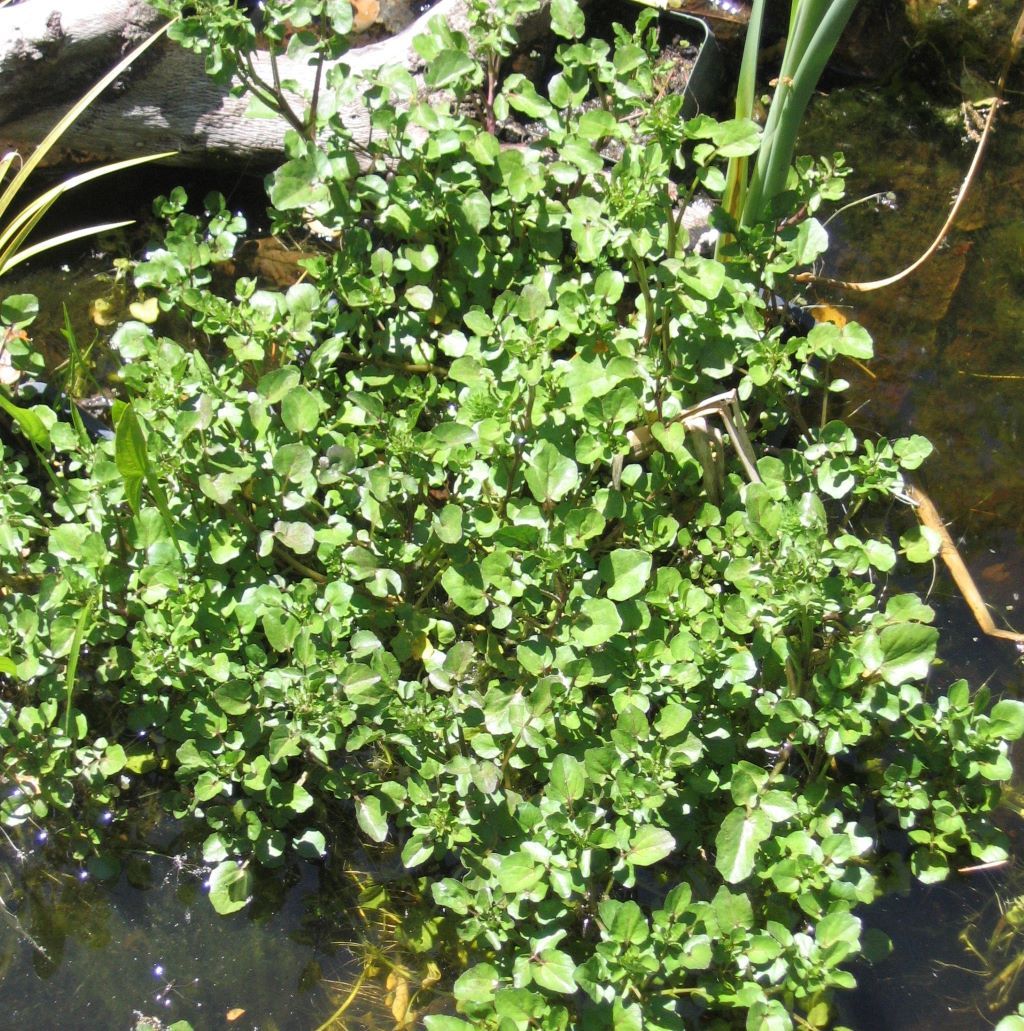 Introduction: Watercress is native to Europe and adjacent parts of Asia and Africa. It is a highly nutritious plant and has been regarded as a special food for several thousand years. However for most of that time it has been gathered from the wild, rather than cultivated.

The cultivation of watercress is somewhat unusual, because of its specialized habitat requirements, but it grows easily enough if given the right conditions. Its native habitat is clean, slow flowing water in springs, ditches and shallow streams. In Europe it was grown commercially in special watercress beds, created beside streams to take advantage of the slowly flowing water. It will grow in any wet soil though, so long as it isn’t stagnant (which can cause the plants to rot).

Growing your own watercress ensures that it is safe for use raw, which isn’t always the case with plants gathered from the wild.

Nutritional content: Wild watercress spends it life bathed in nutrients and as a consequence it is very rich in minerals, including copper, iron, iodine (perhaps the richest source of any land plant), manganese and sulfur. It is also a good source of vitamins A, C and  E. The cultivated plant will be somewhat less nutritious.

Watercress is related to the Brassica family and is rich in many of the same cancer fighting phytochemicals.

You don’t eat watercress as a source of energy, in fact it may be the lowest calorie food in this book. With only about 50 calories to a pound, it makes cucumber (with 68) look positively fattening.

Watercress also contains the irritating mustard oil found in many members of the Brassicaceae, and can irritate the kidneys if eaten in excess.

Crop use: Watercress isn’t a very important crop, even though it is quite nutritious.

Ease of growing: Watercress is easier to grow than people imagine, as it doesn’t actually need clear running water, it just needs wet soil. It can even do well when grown in pots indoors.

Climate: This plant is native to cooler areas of northern Europe and Asia and prefers cool (55 – 75˚F) weather. However it is quite adaptable and can take some heat (growing in water helps to keep it cool.)

Watercress is accustomed to being bathed in nutrients and needs a fairly fertile soil for good growth. It does best if it is sightly alkaline.

Where: Watercress likes to grow anywhere the soil is naturally moist, but it can also be grown on dry land, if you take care to keep it moist. It just won’t be as vigorous under these conditions.

A good way to grow watercress is in shallow trenches (enrich the soil with lots of organic matter to slow down the rate at which it dries out).  These are easier to keep moist.

Seed: Watercress is easily grown from seed, either sown directly in the soil, or started inside and planted out as transplants. Seed is commonly used to start commercial plantings as it is sure to be virus free.

Cuttings: The fastest and easiest way to get watercress is to buy a bunch of fresh watercress from a market and root it in water (sometimes it already comes with roots).

Watercress roots very easily and this is actually one of the ways it propagates itself in the wild. Start by stripping the lower leaves from the cutting (if left on they may rot when submerged in water), then simply put the plants in a jar of water. Change the water regularly (every couple of days), otherwise it may start to smell and can cause the plants to rot. The plants should grow roots within a week or so.

When it comes time to plant, just use the ones that have the most roots. Plant them up to their leaves, so all of the stem is buried. Water well after planting and keep it well watered (maybe with well water.)

Watercress also transplants well, so you could take some from the wild and re-domesticate it.

Spacing: Space the plants 6 – 8˝ apart. They are quite sprawling and the stems will root wherever they touch the soil. Eventually the plants will spread and fill in all the space in between them, to make a continuous carpet.

Feeding: If the soil isn’t very fertile you should give it an occasional feed of compost tea or liquid kelp.

Pests and disease: Commercial plantings are sometimes attacked by viruses, which is one of the best reasons for starting your plants from seed. Small home plantings may be attacked by slugs, snails, flea beetles, spider mites or whitefly.

Bolting: When watercress starts to bolt, its flavor deteriorates and can become bitter and / or very pungent (a trait it shares with most edible members of the Brassica family). Keeping the plants well watered and fed may slow this down, but it eventually happens every year (usually in late summer). You can remove flowers as they appear or you can let the plants produce seed for you.

When growing in water (with its temperature moderating influence) watercress can often be gathered year round. Gather the plants by pinching off the growing tips with your fingers (or by using scissors), leaving the roots and lower leaves to continue growing.

Seed saving: Watercress flowers are self-fertile and attractive to bees, so they produce seed easily. There aren’t many varieties so you don’t have to worry too much about keeping it pure.

Watercress will often self-sow if given the chance.

Given a suitable site, watercress is a reliable, hardy and easily maintained perennial crop. It could be a valuable part of a cultivated freshwater ecosystem, providing shelter and food for numerous organisms. These in turn provide food for fish, birds and small mammals.

Containers: Watercress grows well in containers, just use a wide pot, a fertile potting mix and keep it moist. If using seed just sow right into the pot. To minimize watering you can sit the contain in a larger container of water (make sure to change this regularly). Recently I have been experimenting with fiber pots sitting in a shallow pond and this seems to work well.

Pipe system. Get some 6˝ diameter plastic pipe and cut it lengthwise into 2 halves (or use lengths of aluminum or plastic rain gutter). Then glue them together and put in the ground, so there is a very slight slope (¼˝ in 12˝) and the lip of the pipe is close to ground level. Put the end of the first section of pipe underneath an outdoor tap, so it can be watered easily. Almost fill it with gravel and then plant watercress in plastic containers filled with a mix of fertile soil and peat moss (and perhaps some dolomitic lime).

Waste-water: Watercress can help to purify gray water, though of course you wouldn’t want to eat it from this source.

Ponds: Watercress will grow happily enough in a garden pond, though it doesn’t like stagnant water. Algae can cause problems if it gets out of hand, as it can cover the watercress leaves in a green film that is hard to remove.

Bog: You can also create a watercress bog, which is basically a garden pond, lined with a rubber pond liner or sheet of heavy duty polyethylene (poke a few drainage holes in the sides of the liner) and then filled in with a suitable soil mix (equal parts sand, soil, and compost). You then sow seeds on the surface, or plant cuttings or transplants.

Gather the growing tips any time they are available and growing vigorously. This is a perennial so you don’t want to take too much at one time.

It is rumored that there are named varieties, though I have never seen any.

Raw watercress is nice in salads, sandwiches and salad dressings. It is also good cooked as a potherb and in sauces, soups and stir-fries.

The seed is also edible and (if you can get enough of it to be worthwhile) can be used like mustard seed.