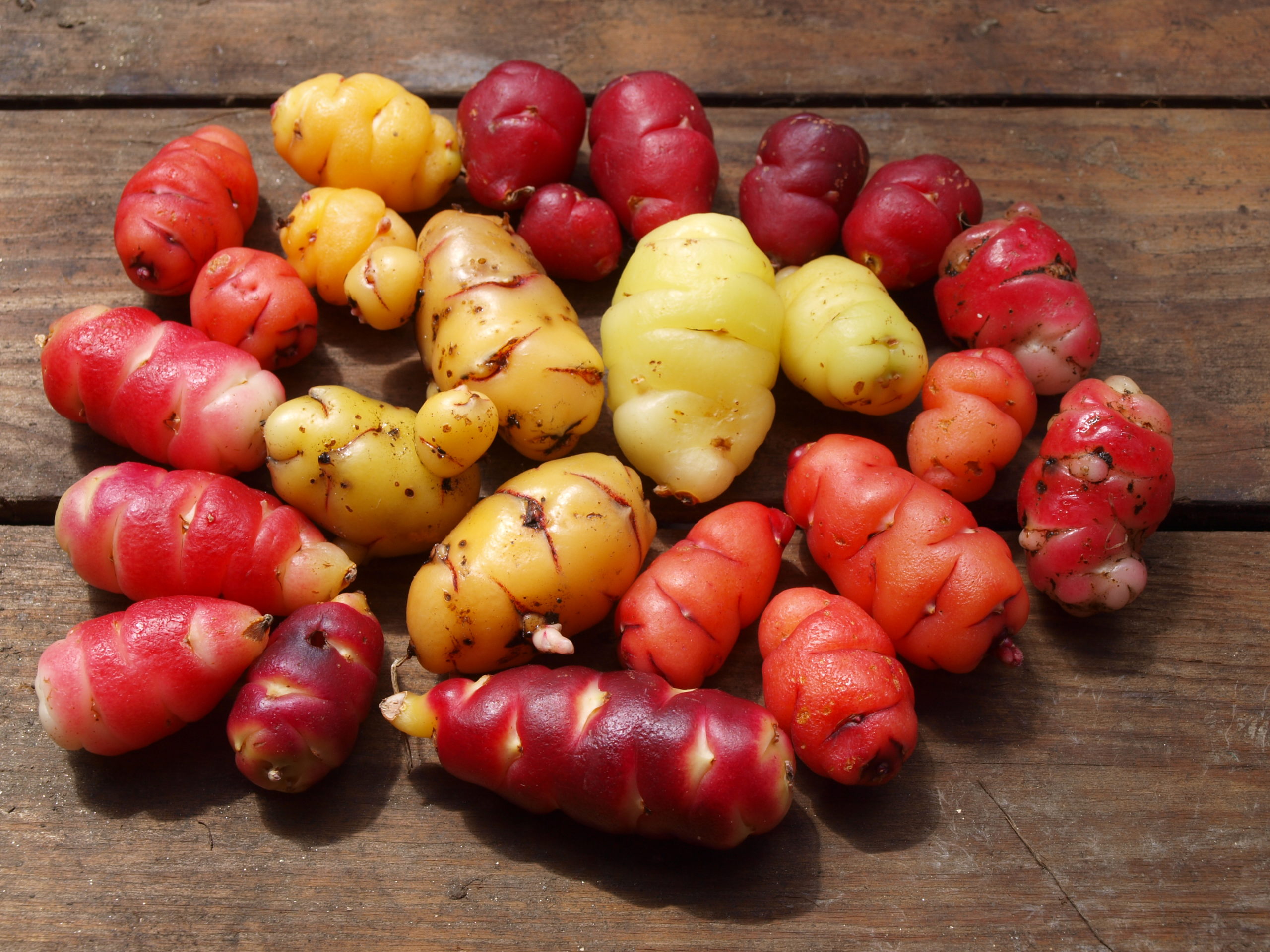 Introduction: In its native Andes oca is second only to the potato in importance as a staple root vegetable. This is largely because it can be productive under more adverse growing conditions.

Unlike its compatriot the potato, oca has never been very well known outside its native range. This is somewhat surprising when you consider of its many virtues. I think it’s time is coming though and that it is going to become much more popular as a garden crop in the near future. For some reason it is already quite widely grown in New Zealand and it is known as New Zealand yam in some places.

Oca is propagated vegetatively from tubers like the potato. These are absolutely beautiful, coming in different colors (red, yellow, pink, white, purple) and having a shiny, jewel-like quality.

Ease of growing: Oca is a rugged and independent plant; it tolerates poor soil and harsh climates, is fairly easy to grow and can be very productive. The only drawbacks are that it is day length sensitive and needs a fairly long growing season (see Climate below).

Climate: Oca is native to subtropical mountains and grows best with a long, relatively cool growing season (they don’t like extreme heat).

Oca is day length sensitive, needing short days (less than 12 hours) to produce tubers, which means that it doesn’t really start producing tubers until after the fall equinox. For this reason it does best in mild areas where fall frosts come late. It is well suited to my California garden, where it grows as a low maintenance perennial.

If your garden gets early frost in September or October oca is unlikely to do well without protection (you can cover them to protect from light frost). Dedicated growers have grown them in poly tunnels, but of course this increases the amount of work required.

Crop value: Oca isn’t anywhere near as productive as the potato, but is a pretty good substitute for it in the kitchen. As it is day length sensitive it will only produce tubers in fall, which means you can only get one crop a year. Newer varieties are less day length sensitive and lower in oxalic acid, which can only add to its appeal.

Nutritional content: The tubers are fairly nutritious, being high in carbohydrate, calcium, iron, phosphorus and vitamin A.

Oca also contains oxalic acid, which is considered bad because it can combine with calcium and prevent it getting absorbed by the body. However this is no more of a problem in oca than it is in spinach (which is not much of one).

Oca is known for its ability to grow and produce well in poor soils (so long as they are well-drained). However it will be most productive in a fertile, sandy soil.

Soil preparation: For maximum productivity incorporate 2˝ of compost into the top 8˝ of soil. Also put a handful of an organic fertilizer mix in each planting hole.

Where: Oca is commonly planted as an annual crop like the potato. If you live in a mild climate you can also give it a permanent home in the semi-wild or forest garden. It needs full sun.

This is an easy crop to get started as it is grown from tubers. Plant these 2˝ deep and 24˝ apart. If you intend to earth them up, this will be easier if you plant them in rows.

Starting indoors: If your growing season is short you can start the tubers in 4˝ pots to save some time.

You might also start indoors if you have just bought some expensive tubers and don’t have many (to ensure there are no mishaps).

Spacing: Space the plants 12 – 24˝ apart (or even wider in some cases). The bigger the spacing the larger the plant will get (they can reach 24˝ in height and 24˝ in width). They start out fairly upright and compact, but eventually sprawl into a heap, with stems rooting where they touch the ground. Wider spacing tends to produce bigger plants which means more big tubers, which is good.

The plants don’t need a lot of space for the first few months, so you might want to interplant something between them.

Watering: Oca doesn’t need a lot of water, but for best production the soil should be kept evenly moist. The plants produce a lot of foliage through the summer and the bigger they get the more tubers they will produce.

Oca will be more productive if you give it extra water when the tubers start to form (not too much though).

Earthing up: If the plants are earthed up after 3 months, they will produce more tubers (this isn’t absolutely necessary though).

Mulch: This is helpful to conserve moisture and suppress weeds, especially if you are growing your tubers in a wilder part of the garden. You can’t easily mulch and hill up though, so must do one or the other.

Fertilizing: The plants will benefit from feeding in late summer when tuber start to form. You could either side dress with a fertilizer mix or feed with compost tea or liquid kelp.

Pests: I haven’t noticed any insect pests or diseases (which is a nice change from the potato). However rodents will eat the stored tubers if given the chance.

Frost protection: The tubers start to develop quickly after the fall equinox and the longer they can keep growing after this time, the bigger the harvest. Protect them from early frost with anything you have (ideally fleece frost blankets, but cardboard or plastic sheet will also work). Keep protecting them for as long as you can, ideally until mid November or December.

When: The tubers don’t start to develop until the day length drops below 12 hours, which may be anywhere from 4 – 6 months after planting.

After the tops have died down (or been killed) you wait a couple of weeks for the tubers to mature and then start to harvest. As a mountain crop it has evolved to deal with frost and the tubers continue to grow for a while after the tops are dead. If it gets seriously cold before this time and the soil threatens to freeze, then you will have to harvest the tubers, otherwise they may be damaged.

In mild climates you can simply leave the tubers in the ground and harvest as needed. Any you don’t harvest will start to grow again the following year.

How: The tubers are found fairly close to the plant and are quite shallow, so are easily dug with a fork. Most are also pretty brightly colored and so easy to spot.

Storage: The best place to store the tubers is in the ground. In colder climates you should cover them with mulch to prevent the ground freezing. If it isn’t practical to leave them in the ground, they can be stored like carrots, in a root cellar in damp sand or sawdust (or simply in slatted wooden boxes). They will keep in a plastic bag in the fridge for several weeks.

Unlike potatoes the tubers don’t need to be kept in the dark, in fact if they are exposed to sunlight it reduces the amount of oxalic acid they contain and makes them less sour.

In their native Andes they are often dried for storage.

Seed saving: Oca produces perfect (have both male and female parts) 5 petalled yellow flowers. You don’t need to worry about them though, as oca is usually propagated vegetatively.

Ornamental: The plants have attractive clover-like foliage and are pretty enough to be grown as an ornamental border. Though of course this border won’t look so pretty when you dig it up.

Containers: Oca will grow well enough in containers filled with fertile soil mix, but they will need to be fairly big if you are going to get many tubers for your efforts.

They can also be grown in grow bags as described in Potatoes.

To save bed space some people grow then in containers for a while and plant them out when they start to get big.

Perennial: In a mild climate oca will grow quite happily as a perennial, you just have to leave it alone.

Finding any oca tubers to plant isn’t easy and finding named cultivars is even harder. The tubers come in a range of colors, but mostly pink, red, purple and yellow (or a mix thereof). Some newer varieties may be lower in oxalic acid.

The root can be used in the same ways as the potato, though they don’t need peeling and are easy to clean. They can be boiled, baked, roasted, fried and used in soups. Unlike the potato it is also quite good raw, being crisp and slightly tart. In Mexico they are eaten with salt, lemon and chile pepper. They can also be pickled.

In its native Andes they sometimes leave the tubers in sunlight to improve their flavor. Apparently this reduces the amount of oxalic acid they contain and increases their glucose content.

The growing tops are also edible and can be added to salads. However they should be used in moderation as they contain oxalic acid.