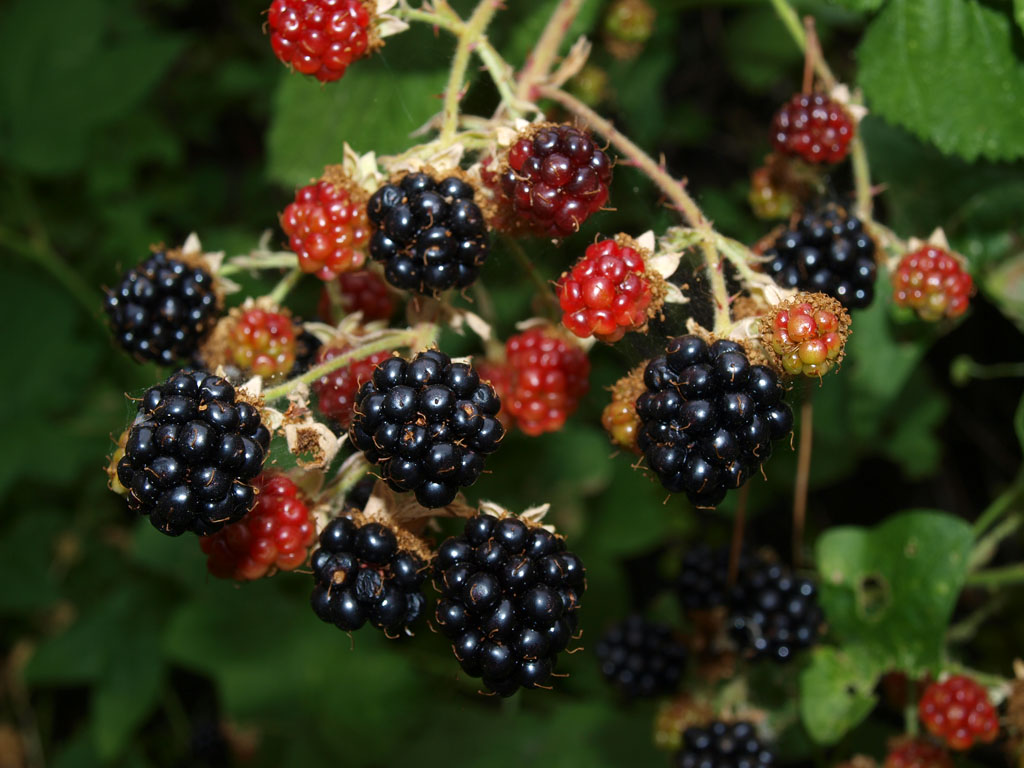 Introduction: The Blackberries has to be the top of my list of garden fruits to grow, they are vigorous, tolerate almost any type of soil and thrive in sun or shade. They bloom late so aren’t much bothered by late frosts. They can also be incredibly productive, and are delicious raw or cooked. They are particularly outstanding for fruit pie, alone or with apples or other fruit. They are also easy to store by freezing and can also be made into preserves. The only good argument for not growing Blackberries is if you have an abundance of wild ones already growing nearby. Another point against them is their thorny nature, but don’t be duped into trying the thornless cultivars. every one I have tried has been very poorly flavored.

Life expectancy: 5-15 years (they do best if allowed to move about somewhat).

Ease of growing: The Blackberry is the ultimate bush fruit for all around ease of cultivation, flavor and productivity. This is a plant where a small amount of work can reward you very well. Even the cultivated Blackberries retain a lot of wild vigor and are very independent (so much so they can sometimes become invasive).

Climate: Blackberries grow wild in every state in the Union including Alaska and Hawaii (and most of the northern temperate zone), so they are pretty adaptable as to climate. They flower fairly late so late frosts aren’t usually a problem

Blackberries will grow in almost any soil, but are most productive in a fertile and moisture retentive one and in ideal conditions some cultivars can produce 2” thick stems 20 feet long. Unlike most fruit it doesn’t have to be well drained (wet soils?). They will also grow in dry soils, but the fruit won’t be as abundant or get as big.

Soil preparation: The plants will occupy their site for 15 years or more, so take care when preparing the soil. If it isn’t very fertile you should prepare the whole growing area (not just the planting hole) by single digging (or double digging if the soil is compacted). This enables you to remove perennial weeds, loosen the soil and incorporate organic matter (compost or aged manure), wood ash and some fertilizer mix.

Site: Blackberries do best in a rich, moist soil with full sun. They will also tolerate part shade, though they won’t fruit as abundantly. Ideally they should be planted well away from wild Rubus species which may harbor pests and disease (though they are mixed up in my garden). They flower so late they can even be grown in frost pockets.

Support: Blackberries are decidedly sprawling plants and if space is limited they will need some support to keep them accessible, off the ground and under control. These usually consists of 6ft high posts (guyed with wire or braced with angled posts), with 1/8″ wires strung between (use straining eyes to enable you to tighten the wires in future). These should ideally be set up before planting so you don’t damage the canes.

It is important that any plants you bring into your garden be free of viruses. If you buy them from a reputable place this is almost guaranteed, but if someone gives you them this is not so certain.

When: In mild climates Blackberry plants can be planted any time they are dormant from late autumn to early spring. In colder climates they are usually planted in spring.

How: Blackberry plants should be put in the ground with the crown is the same depth it was in the nursery bed (or perhaps an inch deeper). After planting you should cut down the top growth so the plant is only 9″ tall. This prevents them bearing fruit in the coming year, so they put all of their energy into vegetative growth and getting well established.

This varies according to the size of the variety, from a minimum of 4 ft to a maximum of 8 ft. After a while spacing becomes academic as they are very mobile and will slowly spread to form dense colonies. They root at the tips of the canes and so can actually move around in search of sun and fertile soil.

Training: Blackberries naturally form a dense thicket, which may be fine for the plants, but is not so good for the harvester (especially with the thorny varieties). If you like wild gardens you may allow them to run wild, but if you prefer order and convenience, you may want to train them. Training is particularly important if you have limited space, as it keep the plants confined to a specified area, while ensuring they get sufficient sunlight and air circulation.

Traditionally the current years fruiting shoots were kept separate from the new growth (this helps reduce the spread of pests and disease). When the currents years shoots finished fruiting they were cut away, to leave more room for the new shoots. Removing the older growth ensures the bush doesn’t gradually become a tangled mass of old and new growth. However it is somewhat time consuming as the new shoots must be tied in place to keep them where you want.

Pruning: Blackberries fruit on two year old canes so should be allowed to grow as much as they want in their first year, without any pruning. The following year the two year old canes will fruit and then die, after which they are cut away. The new growing shoots are then tied to the support wires to replace them. This process is then repeated every year.

Pruning basically consists of removing the dead or dying fruited canes, and any weak new canes, to leave 8 – 10 strong new canes on each plant. If there aren’t enough new shoots then cut back an old cane to a strong shoot at its base.

Pruning can be a painful task and requires thick gloves and long sleeves. It’s a good idea to dispose of the prunings as you work.

Blackberries are self-fertile so only one variety is needed for fruit production. They are insect pollinated (mostly bees).

Fertilize: Blackberries can be incredibly productive and if the soil isn’t very fertile they should be fed annually in spring. Mulch can also be used to supply nutrients.

Blackberries naturally move around, and this is a way to rotate them to new soil.

Though Blackberries are quite drought tolerant they need plenty of water for maximum production of tasty fruit. Lack of moisture when fruiting will result in poor quality fruit. Water is also important for the production of replacement shoots, so make sure they get enough. Some form of drip or trickle irrigation is best.

Mulch: A mulch of compost or aged manure will feed the plants and help to keep them productive.

Blackberries are shallow rooted and it also helps to keep down weeds, keep the soil cool and conserve moisture.

Frost: In very cold climates the canes are sometimes covered in mulch for the winter to protect them from frost.

Pests: Blackberries are fairly pest free, though a few pests may occasionally be a problem.

Deer: These love all Rubus species and will eat all but the most viciously spiny parts (and even then they will carefully nibble the tender leaves off). The thornless types are a deer dream come true.

Birds: These love the fruit, and are most effectively dealt with by bird netting. You might also try stringing up bright flashing objects like shiny aluminum pie tins, mylar tape or old cd’s. Inflatable predator balloons or dummies may also work (though you have to move them around a bit).

Viruses can reduce yields. Prevention of disease is the treatment, which means buying virus free plants. Commercial growers attempt to eliminate all wild raspberry and blackberry plants within 600 feet, but this isn’t very practical on a garden scale.

The most common problem with Blackberries is their vigor, they spread enthusiastically and can become invasive. Harvesting and pruning can be somewhat painful given their stout thorns.

When: The simplest way to tell when it is ripe is to sample a few. You need to harvest the fruit as it comes ripe to encourage further production (and because birds may get it otherwise). The fruit ripen over several weeks, so it is good to harvest every few days.

Storage: The ripe fruit are best used immediately and don’t keep for more than a few days in the fridge. It freezes very well though and can also be made into preserves.

Landscape uses: The viciously thorny stems make them useful as security barrier plants or to reinforce a fence (think of them as vegetable barbed wire). Don’t put them anywhere the thorns might come into contact with living flesh, such as near paths or gates. There are now quite a few very productive thornless cultivars that work much better in heavily traveled locations. These can be grown on fences, arches and even pergolas.

Propagation: Blackberries are among the easiest plants to propagate and you have several options.

The simplest is tip layering, which is the way the plants spread naturally. The flexible stems naturally root at the tips of canes and create new plants every year (this makes them quite mobile). These can be dug up and moved or you can simply direct the tip to where you want a new plant.

They can be grown from stems cuttings.

Root cuttings also work well. I once transplanted some established canes and new plants appeared from the fragments of broken roots that remained. Yet another easy way involves detaching suckers from the base of the parent plant and transplanting them.

The most vigorous, hardy and productive varieties are the thorny ones. They may be divided into trailing varieties and erect varieties.

The University of Arkansas has recently produced a number of erect cultivars that produce new shoots from their roots and spread like raspberries. These include Apache, Arapaho’ Cherokee Kiowa and Navaho.

They have also produced primocane blackberries which flower and fruit when only one year old (like raspberries).These include Prime-Jan and Prime-Jim. These do best in milder climates.

Thornless: The less said about these the better, except that they make great forage for deer.

Loganberry: One of the first, it has delicious aromatic purple fruit.

Boysenberry: The reddish black fruit are sweet and aromatic.

Ollalieberry (a cross between Loganberry and Youngberry)

Youngberry: Similar to Boysenberry, but sweeter.

Marionberry (a cross between ‘Chehalem’ and ‘Olallieberry)