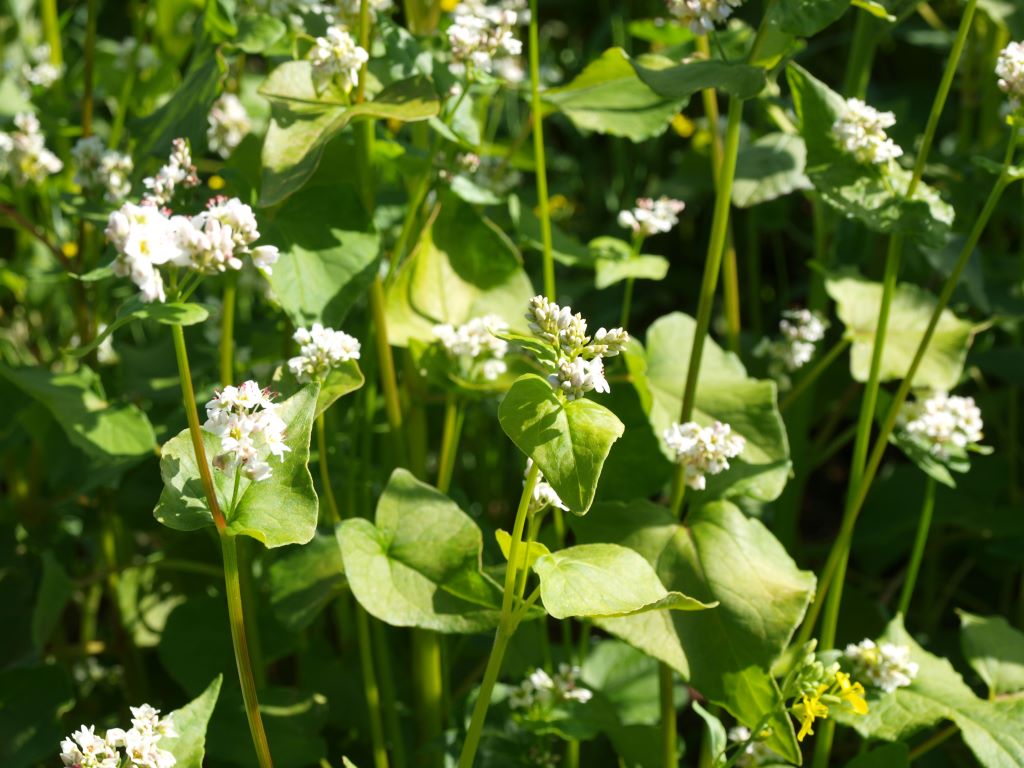 Introduction: The name is derived from the visual similarity of the seeds to the larger seeds of the Beech (Boek) tree. This annual was once commonly grown as a home scale grain crop, especially in Eastern Europe. It is categorized as a pseudo-cereal as it is grown as a grain crop, yet isn’t a member of the grass family. It was widely grown in the United States in the 18th and 19th centuries, but it almost disappeared along with the self-sufficient small farmers who grew it.

These days buckwheat is most familiar to gardeners as a fast maturing summer green manure crop.

Crop value: Buckwheat is unusual in that it is a very short season grain crop, able to produce in poor soil and under adverse conditions. Perhaps equally important for the home grower it is fairly easy to process into edible food. It was once an important crop for self-sufficient farmers and may be important again one day. Its biggest drawback is the amount of processing it needs to make it edible.

Ease of growing: Few plants are as easy to grow as buckwheat. The relatively large seed germinates quickly and the plants grow vigorously and mature rapidly. If you can’t grow buckwheat successfully, I suggest you stick to alfalfa sprouts (actually don’t give up, just try again, it only takes a couple of months).

Climate: Buckwheat prefers cool, moist conditions (70˚F is ideal), but it can’t tolerate any frost. It is grown commercially in the northern states and Canada. However it is a fairly adaptable plant and quite tolerant of less than ideal conditions.

Very high temperatures may cause the flowers to die without producing seed. However it will produce more flowers to replace them and nearly always manages to produce enough seed to be worthwhile.

Nutritional content: The high protein grain has a better amino acid composition than most cereals and is especially high in lysine. It is also rich in complex carbohydrates and contains about 1550 calories per pound.

Buckwheat will grow in almost any soil (even very acid ones), so long as it is reasonably well-drained and fairly loose. Traditionally it was grown on soils that were too poor for more valuable crops.

When: Buckwheat is a cool season crop and grows best when the weather isn’t too hot. However it doesn’t like cold weather and can’t stand frost. Plant it any time after the soil has warmed up in spring (2 weeks after the last frost date). More commonly it is planted in mid to late summer, so it can mature its seed in cooler weather.

Buckwheat has the shortest growing season of any “grain” crop, and may mature in as little as 2 months. In ideal conditions it may flower within 5 weeks of planting. This means it can be planted over quite a long period in summer and will still have time to mature before cold weather arrives.

If your growing season is long enough, it is possible to get two crops in one summer.

Direct sowing: The easiest way to plant buckwheat is to broadcast the seeds onto the bed and then rake them into the soil. If your supply of seed is limited, you will waste less seed if you sow in rows (make the furrows ½˝ – 1˝ deep).

Spacing: You want the plants to be spaced from 4 – 6˝ apart.

Watering: The seeds need moist soil for good germination, so keep them well watered. Buckwheat is quite drought tolerant, but gives higher yields if watered regularly.

Pests: Few insect pests bother buckwheat, though birds and slugs will eat the newly planted seeds and emerging seedlings. Birds may also go for the ripening grain. Deer can also be a problem for unprotected plantings.

When: Buckwheat will be ready to harvest 60 – 90 days after planting (the exact time depending upon the variety and climate). The seed doesn’t all ripen at once, so you harvest when ¾ of it has turned dark brown. The plants can still be green when the seed is ready to be harvested. If you wait too long some of the seed will be lost (and will probably self sow).

How: Cut the seed heads with a sickle and dry them on a large tarp. Then thresh out the seeds and dry to 12% moisture for storage.

Processing: The thick seed coat (pericarp) comes off fairly easily when grinding the seed to make flour. Sift the biggest parts out of the flour before using it (you don’t need to get it all though).

Seed saving: Just save some of the seed you collect.

Green manure: This tender annual is most familiar to gardeners as a green manure crop. It is one of the best short-term soil improving crops for the summer garden. It produces a dense fibrous root system, thrives on poor soils, adds organic matter and improves soil structure. It is also very fast growing and can be grown in a few weeks, in between other crops.

When incorporated as a green manure it is very effective at feeding and stimulating soil life. It also accumulates phosphorus and makes it more available.

Weed suppression: Buckwheat can grow up to four feet in height in only a few weeks and grows so densely it can be an effective smother crop. It actually has an allelopathic effect on many weeds and can suppress weed growth for up to 2 months. This works best when the plants are simply cut down within a week of flowering and incorporated into the soil.

A good way to establish a new garden is to plant and incorporate, two consecutive crops of buckwheat.

Buckwheat Lettuce: Some people use buckwheat as an indoor micro-green salad crop. The seeds are soaked for 3 hours and then spread out on a tray of soil, vermiculite, felt or wet paper. They are then put in a warm place and misted daily. When the seeds begin to germinate the tray is moved into full light. The greens will be ready in 1 to 3 weeks, depending upon the temperature. The plants are harvested with scissors when they are 3 – 6˝ tall, leaving about an inch of stem behind. See Microgreens for more on this)

Caution: There is a potential problem with the frequent use of buckwheat greens. The green plant contains a toxin called fagopyrin, which can cause the skin of some individuals to become hypersensitive to sunlight. For this reason I don’t recommend that you use any green parts (you may ask why I bothered to include it then?).

Buckwheat honey: This is considered to have a very fine flavor. Buckwheat is sometimes planted specifically to provide forage for bees.

This isn’t a very important commercial crop, so there aren’t very many improved varieties available (only about 6 are important commercially). They are also difficult to find, which is why I often end up using the seed available locally for use as a green manure crop, or from the wholefood store. It is quite likely to be one of the following:

Buckwheat has been an important peasant food in many parts of the world. In Japan it is used to make soba noodles, in Eastern Europe it was used to make a porridge called kasha and in North America it was used for buckwheat pancakes. You can add 20% buckwheat flour to many recipes to improve them. More recently it has been used to make gluten free beer.