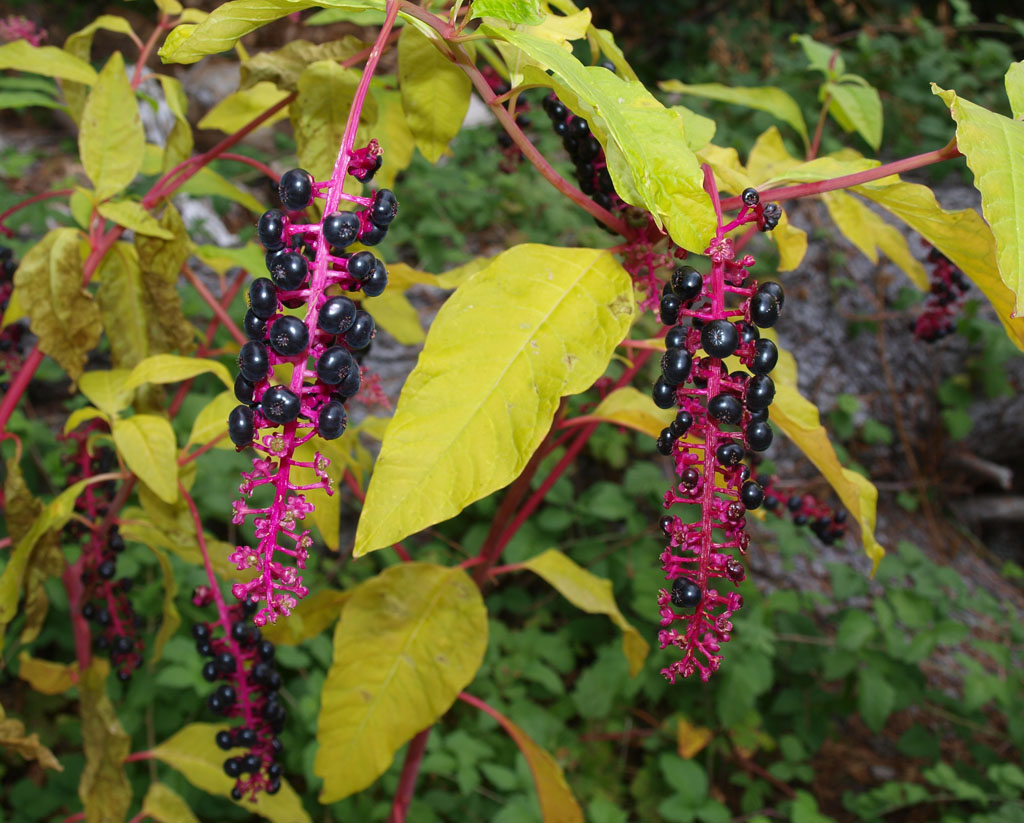 Caution: The young spring shoots have been called the most widely used American wild green food. They are sometimes cultivated and even canned commercially. So it is somewhat surprising to hear botanists and pharmacologists sometimes warn that one should not even touch the raw plant with bare hands. Apparently the plants contain substances called mitogens, which may cause blood abnormalities if they come into contact with blood (such as through a cut).

The only parts of the plant that should ever be eaten are the new shoots (when less than eight inches tall) and these must be properly cooked to be edible. The root is extremely poisonous and has caused a number of fatalities. There are occasional reports of people getting sick after eating cooked Pokeweed, but I don’t know any of the details.

Gathering: The spring shoots are cut as close to the ground as possible, when about 6 ‑ 8 inches high. Harvesting a few of these does little harm to the vigorous plants, as they simply produce more. It might be a good idea to wear gloves while handling the raw plant as a precaution.

Forcing: The roots have been brought indoors in late autumn and forced like those of Chicory (Cicorium), to produce early spring greens.

Poke sallet: This isn’t a salad by any modern definition, but that’s what it’s called. Prepare it by peeling off the outer leaves and cooking the shoots in boiling water for 1 minute. Drain, add new boiling water, boil for another minute and then drain again (this removes most of the water soluble toxins). Add fresh boiling water, cook for a further 15 minutes, then drain and discard the water. The cooked shoots can be eaten as they are, added to soups or fried in tempura.

The new growth from plants cut down to the ground has also been eaten after preparing as just described, as have the seedlings, but they are not as good (and may not be as safe).

Medicine: Mitogens are substances that stimulate cell division and have been used in the laboratory to study the immune response and certain diseases. An extract of the plant has been studied as a possible treatment for herpes, as it seems to inhibit the growth of the virus. Other chemicals in the plants have been studied as possible anti-cancer drugs.

The berries of an African species Endod (P. dodecandra) have been found to kill the Snail that carries the deadly tropical disease schistosomiasis. They have potential value as a locally produced, low cost molluscicide for controlling this serious health threat. They could also be used to eradicate mosquitoes and other disease carrying insects. I don’t know whether this species has any of those properties.

Animal food: The berries are a favorite food of birds and this explains the plants wide dispersal. It is said the seeds germinate better after going through the bird’s digestive system (this is a form of scarification) and they may not germinate at all if they do not receive this treatment.

Other uses: The juice of the berries has been used as a fish poison, and as purple ink.

Horticultural uses: Though generally considered to be a weed, Poke is a truly spectacular plant. With its purple and green stems and shiny purple berries it would probably be a prized ornamental if it were harder to grow (some things are just too easy).  It is not a plant for small gardens though, as when growing in full sun and rich moist soil it may reach ten feet in height.  It can also become a troublesome weed as bird sown seedlings spring up everywhere. Another problem is that the plant may carry mosaic disease, which attacks a number of important garden vegetables. It has been cultivated as a potherb in several countries

Cultivation: Poke can be grown from root cuttings or seed (soak in sulfuric acid for 5 minutes to simulate the trip through a bird), or stratify for 6 ‑ 12 weeks. It will grow in part shade but prefers full sun. You can usually find seedlings around mature plants and these could be transplanted.