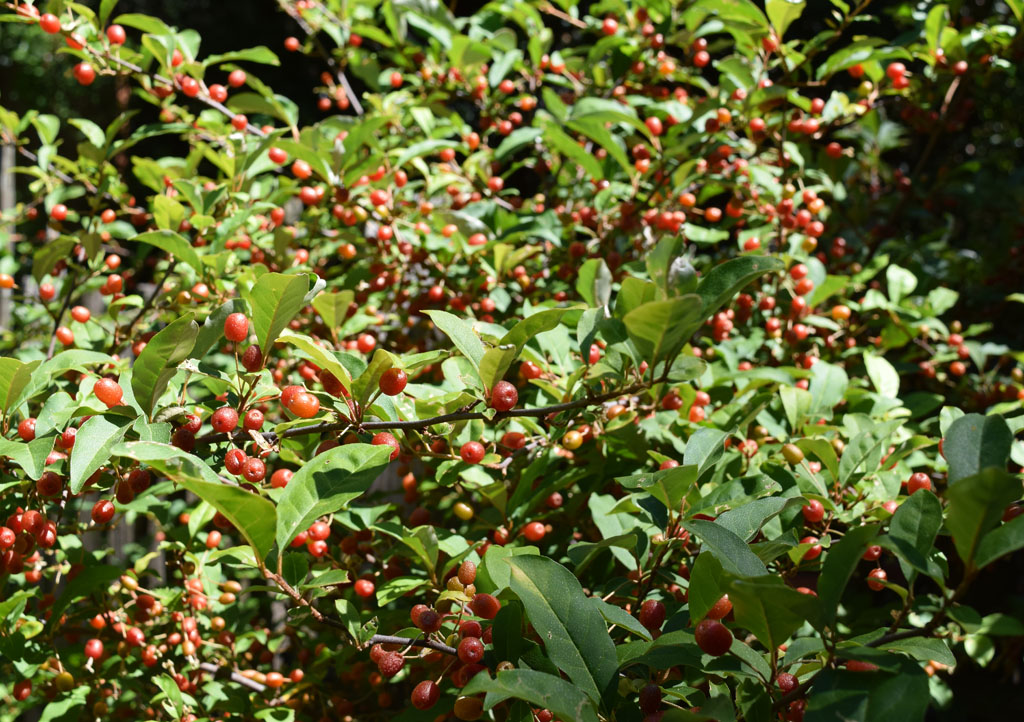 The food producing shrubs have a number of uses that make them especially important in the food garden and they can make up a significant proportion of the plants (especially as it gets bigger). When you compare their productivity to how little attention they require, the best species have few equals as food producers and deserve to be much more widely planted than they are in most gardens. They also produce some of the best tasting foods you will find anywhere and few people don’t like them (how can you not like raspberries, loganberries or blueberries?) As a major bonus they are also highly nutritious, being packed with a variety of minerals, vitamins and beneficial phytonutrients.

I value the shrubs so much because of the way they increase productivity in the garden. They increase the density of planting, by fitting between other plants: around trees, in borders, along boundaries. In a small garden they are most often used as hedges and foundation plantings, but in a larger garden you can also use them in a forest garden, where you create your own woodland ecosystem with trees, vines and perennials. Of course shrubs are quite permanent and often reach a significant size (sometimes as large as small trees), so they are also important landscaping plants (they fit into their own ecological niche between the taller trees and the lower growing plants). Their large size helps to create the framework of the garden and modifies the microclimate around them, so they shelter lower plants and make good windbreaks.

Many shrubs tend to be fairly easy to propagate vegetatively (easier than trees), which means you can produce a lot of them for very little money (it just takes time). Many are also very tough and able to grow and produce food in the most unpromising conditions, where lesser plants could barely even survive (in drought prone areas they often become the dominant species). These species are particularly useful for filling empty and unproductive parts of the garden.

Which shrubs work best for you will depend upon the climate and growing conditions (look around and see which kinds grow wild nearby). The Rubus species (Blackberries, Raspberries and their hybrids) are the quintessential weeds and in most places they need more control than encouragement (I am constantly amazed at their ability to tolerate neglect bordering on abuse and come back strong). In cooler climates Blueberries may grow like weeds too, but in my garden they take a little coaxing. The Ribes species (Gooseberries, Currants) are also very independent, as are the Honeyberries, Bush Cherries, Salal and Juneberrries.

Many shrubs grow rapidly and spread vegetatively to form colonies and in a few years they may fill an area to the point where it becomes crowded (they may also start to creep where they aren’t wanted). If this happens you may have to thin them, which is work, but also gives you more plants. You can try moving these to another location, or pot them up and give them away. Fortunately shrubs (unlike trees) are often fairly easy to move, even when they get quite big (you may even be able to divide them). You have to do this when they are dormant in winter, and fruit production will decline in the year you move them, but they usually recover quickly (I‘m not guaranteeing it though).

One of the things I most like about shrubs is that they don’t give up easily. Trees often die if you neglect them but not the rugged shrubs. I have bought various Bramble berries over the years and planted them in less than ideal conditions. I thought several of them had died of neglect, but this year I just realized that they have persisted and spread and I actually have quite a jumble of productive plants. Even if their tops are killed their roots will often survive and send up new shoots (they may also regenerate from root fragments left behind while transplanting, but that’s another story).

If you live in an area with gophers you will have to protect your shrubs by planting in wire baskets. If you don’t they may very well kill your plants eventually (or parts of them, if they have spread out).