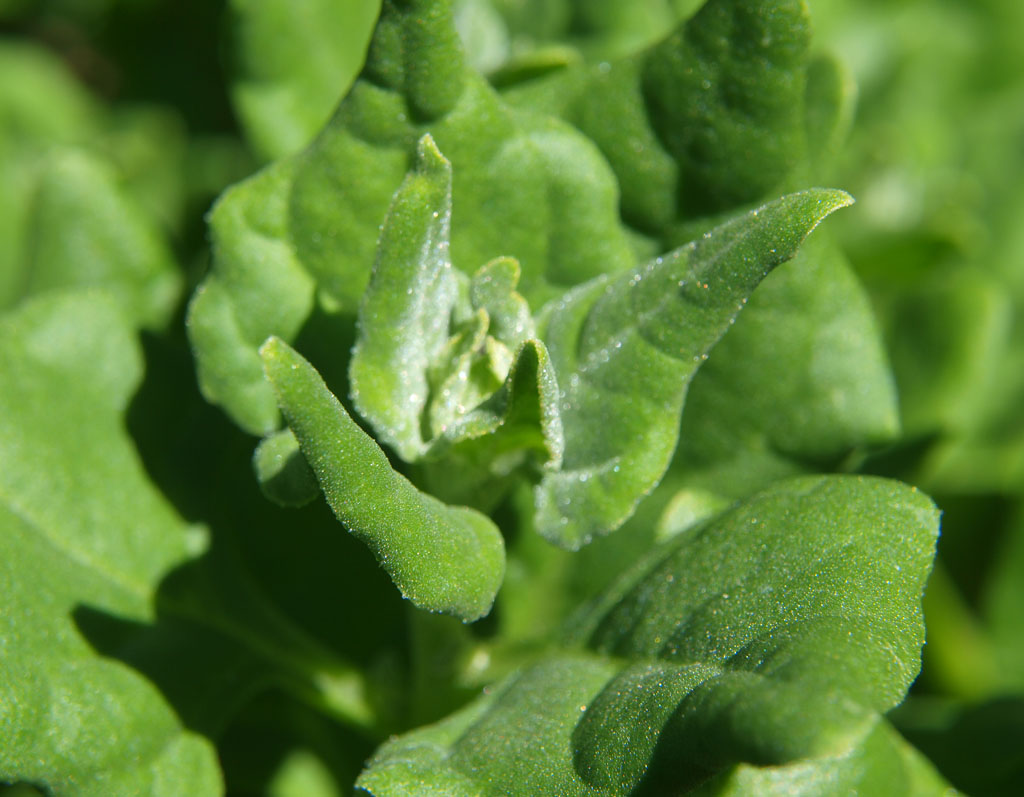 Introduction: This species is native to coastal areas of New Zealand and Australia, where it grows on sand dunes and beaches. As the name suggests it can be used like spinach, but is rarely found for sale in markets so you may not have heard of it. It finds its way into the home vegetable garden as a warm weather substitute for spinach.

Climate: New Zealand spinach is best known for being much more tolerant of hot and dry weather than spinach. It is actually a perennial, but it doesn’t like frost, so must be grown as an annual in all but the mildest areas (zone 10 or 11). It grows best at fairly moderate temperatures.

Ease of growing: I have found this plant to be extremely easy to grow in my garden. In fact I only planted it once and it is still out there  producing greens three years later. Not only does it self sow vigorously, but it is hardy enough that some parts survive the light frosts of winter and regenerate. It is actually a tender perennial and in my garden it has proven itself a true no work plant. It grows rapidly and forms a dense carpet that could even be used as a groundcover. It is rarely bothered by pests and tolerates high temperatures.

New Zealand Spinach grows best in the typical ideal garden soil, moisture retentive, well-drained and fertile. It is quite tolerant of saline and alkaline soils and grows wild along the coast of California (which is pretty close to its native habitat).

It is quite drought tolerant, but prefers to grow in moist soil (on the coast near here you usually see it growing wild in damp spots).

Soil preparation: Incorporate 2˝ of compost into the soil, as well as some fertilizer mix. If the soil is poor it may bolt quickly.

Where: In cool climates this plant needs full sun, but in warm weather it does better with light shade during the hottest part of the day. It is a low growing, sprawling plant and is independent enough to do well in wilder parts of the garden.

When: This is a warm weather crop and can’t stand frost. There is no point in starting it until all danger of frost has passed and the soil has warmed up to at least 60°F (usually at least 2 weeks after the last frost date). If you want to start it earlier you can warm the soil with cloches or plastic mulch (or start it inside).

The seeds are a little temperamental in their germination and may take 3 weeks to emerge. They are often soaked overnight prior to planting, to soften the skin.

Each “seed” is actually a capsule and contains several seeds. When all have germinated you should thin to the best one (or you could transplant the extra seedlings).

Transplants: If the growing season is short it should be started indoors about 4 weeks before the last frost date. Plant the seedlings out 2 weeks after the last frost.

Direct sowing: In hot climates it is easier sow the seed directly in the garden. Plant them ¼˝ deep.

Watering: This succulent plant is quite drought tolerant, but you should always keep the soil moist. If it gets dry the quality of the leaves deteriorates and growth slows down drastically.

Mulch: This is useful while the plants are young, to suppress weeds and keep the soil moist and cool. As the plants mature they sprawl over the ground and form their own living mulch.

Pests: New Zealand spinach is usually almost (never say never in the garden) totally free of pests and diseases. The first time I tried growing it in my present garden, the quail demolished the seedlings as they came up. Once I got them well established they were so vigorous and fast growing that I had no more problems.

When: Don’t start harvesting until the plant is about a foot tall and has enough vigor to tolerate cutting.

How: If you only harvest the growing tips the plant will regenerate quickly and can be harvested for months (this is the preferred method). You can also cut it down almost to the ground and (hopefully) it will sprout up again.

The abundantly produced seeds of the mature plant aren’t very nice to eat and it can become a bit of a challenge to harvest the tips without getting too many of them.

The plants is best used fresh, but can be kept in the fridge in a plastic bag for a few days. If you suddenly have a glut you can cook and freeze it like spinach.

Seed saving: This couldn’t be simpler, just leave it alone and it will produce seed abundantly (you don’t need to know any more). If you allow it to produce seed, it will often self-sow too.

Cuttings: In mild climates, where this succulent plant can be grown as a perennial, it is commonly propagated vegetatively from cuttings. These root very easily.

Wild garden: This plant is so independent it can be grown as a semi-wild plant. Use it in a sunny part of a forest garden (it doesn’t really like shade), or any vacant spot. If it likes the conditions it will self-sow.

Ornamental use: The dark green triangular leaves make this quite an attractive plant and it can be used as a border or backdrop for ornamentals. It might also be used as a temporary groundcover.

Container growing: It does quite well as a container plant, though you need to keep it well watered for best flavor.

I haven’t seen any, but apparently there is one called Maori. Usually it is just plain old generic New Zealand spinach.

I don’t think the fleshy leaves are very good raw, though some people like them. They make a pretty good spinach substitute when cooked though. (I prefer to remove any large seeds before cooking).

Use the leaves in any recipe calling for cooked spinach. Some people say you should blanch them for 3 minutes and then boil in fresh water to reduce their oxalic acid content.