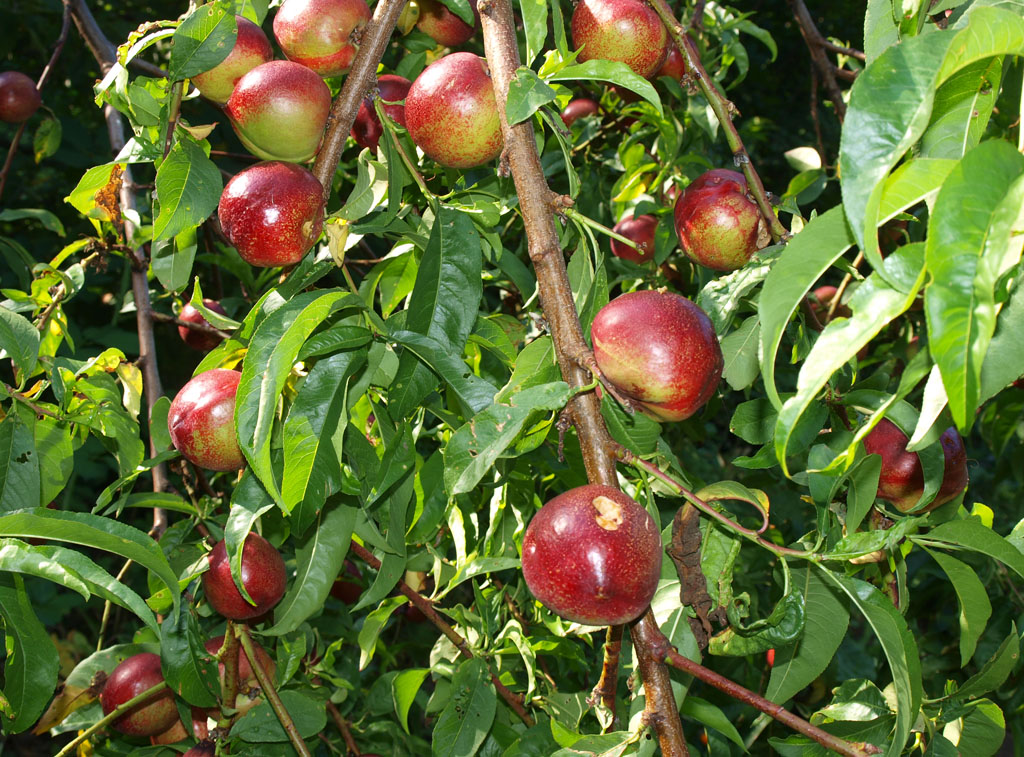 A soft and succulent peach, ripened to perfection and warm off the tree, is one of the ultimate treats of the summer garden. Store bought fruit doesn’t even come close (my daughter once asked me why supermarket nectarines aren’t the same thing as those we grow).

A nectarine is a Peach that has lost its fuzzy coating (which many people find to be a big plus), but that isn’t the only difference. Nectarines tend to be slightly more temperamental to grow too.

History: The peach was cultivated in its native China for centuries before it spread to all warm temperate regions.

About Peach and Nectarine

Life expectancy: 8-50 years depending on whereabouts in the country and on what site.

Ease of growing: Mention growing peaches to most experienced gardeners and they usually roll their eyes and say peach leaf curl. This ubiquitous fungus disease is the reason peaches are generally considered to be the highest maintenance common tree fruit, and one of the shortest lived (sometimes as little as 8 years and often only 20).

How easy peaches are largely depends upon the climate though, I’m fortunate to live in an area that suites them quite well and I find them to be fast growing, vigorous and highly productive. They are often somewhat disfigured by the ever present peach leaf curl, but I find I can just ignore it and they still produce fine. They need regular pruning and thinning.

Climate: Peaches are quite hardy and actually prefer a cold winter (they can tolerate temperatures as low as –20° F). They don’t really like very mild winter areas as they don’t get enough chill hours (though there are some low chill varieties). They like a dry early spring as the flowers open early and can be damaged by a hard late frost (the flowers are vulnerable from the time the pink color shows). This should be followed by a warm summer with lots of sun to ripen sweet fruit. Wet weather at any time can encourage disease.

Peaches can be grown in cooler areas if you choose a suitable variety and plant in a warm sunny microclimate (such as against a south or west facing wall). A wall will also help to protect them from late frost (in extreme cases you can easily cover them with sheets).

Peaches prefer a light, well drained, fairly deep loam, though they will tolerate most soils so long as they are well drained and not too heavy. If your soil isn’t very well drained you might consider planting on a hillside, or on a mound.

Site: Peaches are best planted in a warm, sunny spot that is sheltered from cold winds. Avoid frost pockets because they flower almost as early as the Apricot (February in my garden). They need full sun to produce sweet fruit.

Soil preparation: If the soil isn’t very fertile you should prepare the whole growing area (not just the planting hole) by single digging (or even double digging if the soil is poor). This enables you to remove perennial weeds and incorporate organic matter (compost or aged manure), along with wood ash and maybe some standard fertilizer mix.

Maintenance: Peaches are one of the higher maintenance fruits. They only fruit on one year old wood, so are commonly pruned annually to encourage new growth. They usually set a lot of fruit and often need serious thinning. They may also require spraying to keep pests and diseases in check.

Fertilizing: Usually the trees will get adequate nutrients from their mulch of compost or aged manure. If the plant doesn’t put on at least a foot of growth in a season (or has pale leaves) you might want to give it a source of nitrogen in spring. This should be done early in the year because later applications can encourage sappy growth that is vulnerable to frost damage.

Watering: The trees should be given a steady supply of moisture for best growth and fruiting (though I don’t water mine at all and they produce wonderful fruit). Avoid irregular watering as an abundance of moisture after a drought can cause fruit to split. Drip irrigation works best as it is not good to get the leaves of fruit wet (it can cause disease).

Pollination: Most peaches are self-fertile and so are very reliable producers of fruit. This means you only need to plant one tree to get fruit. A few (Indian Blood) need pollination, in which case you should have at least two trees.

Thinning: These self fertile trees usually set so much fruit they need to be vigorously thinned to avoid overbearing and breakage of branches (also to avoid biennial bearing). I spend more time thinning the excess fruit than on any other Peach task. This is usually done when the fruit are about an inch in diameter (which should be 4-5 weeks after fruit set). It’s better to thin in several stages though, beginning when they are 1/3” in diameter and ending when they are 1” or so.

Depending on the size and vigor of the tree you might leave one fruit every 4 to 6 to 9 inches. Early varieties are spaced further apart because they don’t have as much time to mature their fruit.

Pruning: Peaches require more pruning than most other trees because they fruit only on one year old wood. They are often pruned annually to encourage new growth, usually by cutting back new growth by half. This is usually done in late winter as it needs to be completed before flowering. Be careful not to leave large areas of exposed wood as it can become infected with bacterial canker.

Unpruned trees will produce a lot of fruit one year, but often very little the next year because there wasn’t enough new growth. You can thin to remedy this though. They will also produce a huge quantity of small fruit which requires drastic thinning.

Training: The trees are usually pruned to an open center to allow air and light to enter the middle of the tree.

Propagation: Peaches tend to come fairly true from seed and apparently it is possible to grow Indian Blood Peaches from seed to fruit in as little as 5 years. Named varieties are grafted or budded however.

Problems: If you don’t pick the ripe fruit regularly, they can drop and make a slippery mess on paved surfaces.

Mulch; Use a mulch of compost or aged manure to supply nutrients and to conserve soil moisture.

Containers: In very cold climates you can grow dwarf peaches in containers and bring them inside for the winter.

Quite a few pests and diseases may affect peaches.

Pruning, thinning and good sanitation can all help to reduce disease problems.

Peach Leaf Curl This is the commonest affliction of peaches and nectarines, but I find I can ignore it entirely. It is worst following wet spring weather (which is almost every year where I live). Even though the plants are sometimes afflicted quite badly, they are so vigorous they just put out more leaves and plenty of delicious fruit. Some curl resistant varieties are now available. Nectarines are even more susceptible than peaches.

The common treatment for leaf curl is to spray with lime sulphur in late December, mid January and early February.

Powdery Mildew: Can be a problem in wet climates.

Storage: Fruit can be stored for a week or so in a cool place, but it will continue to soften. They dry, freeze and can well.

Landscape uses: Peach is potentially a beautiful flowering tree but it is commonly disfigured by peach leaf curl, which leaves it looking somewhat less than attractive. Be cautious about planting them adjacent to paved surface because the fruit makes a mess and is a potential slipping hazard. The trees may need spraying so don’t put them near anything you don’t want sprayed too (such as windows).

Unusual growing ideas: It is possible to plant 2 trees in the same hole to get slightly different maturation times. You can also have several varieties grafted on to the same tree.

Same as for almonds, plums

Genetic dwarfs: Peaches are also commonly available as genetic dwarfs. I have always been suspicious of these every since I worked in a garden where they produced such poor quality fruit that no one even bothered to pick them, but apparently newer varieties are much improved in this regard.

Varieties: It is important to choose the right variety for you area with regard to disease resistance, chill hours, heat tolerance, etc.

The harvest season isn’t very long for an individual tree, so it pays to have several trees with staggered maturation times.

Food uses: No one needs to be told how to eat peaches.

If you have an abundance of fruit they freeze very well. They also dry well too.