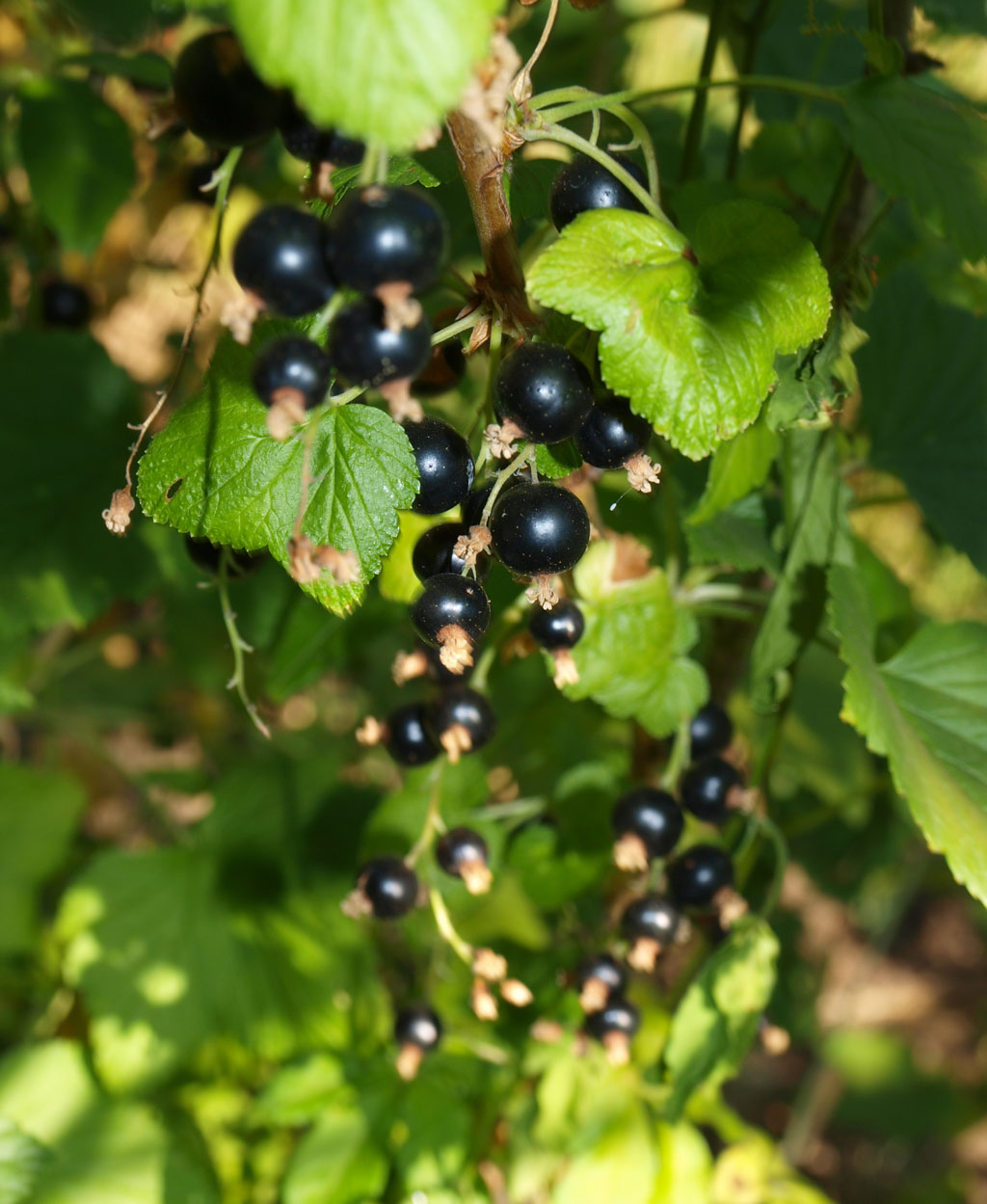 History: This species is native to the cooler areas or Europe and western Asia. It is easy to grow, low maintenance and produces an abundance of nutirious and very tasty fruit, yet it is very much under-appreciated in the United States and deserves to be much more widely grown. This neglect is partly because they are plants of northern climates and do best in cooler areas. The other reason is that it has long been illegal to grow them in some states, because they are an alternate host for White Pine Blister Rust, a fatal disease to some species of Pine tree. As a consequence cultivation was illegal in some states (mostly northeastern states including (ME, NH, VT, NJ, DE, NC, WV.) Is it still illegal?

Nutrition: Blackcurrant fruits have been called a superfood because they are very rich in vitamin C and are one of the best sources of antioxidants.

Ease of growing: In a suitable climate Blackcurrant is easy to grow, very productive and demands little attention. It is also delicious, so what more could you ask for?

Climate: Though Blackcurrant is native to northern climates and does best in cooler areas, it is pretty adaptable and grows very well in my California garden. It is very hardy (to-40°F) but fruits fairly early and in cold climates the flowers are vulnerable to late frosts. It doesn’t like really hot weather, so give it some shade in warmer climates.

Blackcurrants prefer a deep, moisture retentive, well drained, rich garden soil, However they can do pretty well on most soils, even quite wet ones.

Soil preparation: These vigorous and productive shrubs can use a lot of nutrients, so if the soil isn’t very fertile you may want to dig the entire planting area and incorporate lots (at least one wheelbarrow every 2 square yards) of compost or aged manure (also wood ashes and maybe a fertilizer mix). This works much better than simply amending the planting hole, as it encourages the roots to spread out.

Site: Blackcurrants are native to cool moist areas, so if your climate is hot and sunny they may benefit from light shade and will need plenty of moisture. Generally they produce less fruit in the shade, as they get less energy (but some may be better than none). In very cold climates you may want to give them a warm sheltered location as they flower early and are vulnerable to late frost. If your soil isn’t very well drained you might consider planting on a hillside, or on a mound.

Make a large hole so you can spread out the roots widely, and plant an inch or two deeper than they were in the nursery, to encourage suckering.

After planting it’s a good idea to cut off the top to just above the second bud above the ground. This stops them making fruit during the first year and helps to ensure they develop a good root system. At the end of the summer the plant should have 3 or 4 good strong shoots which will produce fruit the following summer. It may sound like a waste to cut off all that growth, but you can try rooting the pieces you cut off and so get extra plants quite quickly.

Training: Blackcurrants are grown as multi-stemmed shrubs, with several shoots coming out of the ground, rather than a single trunk.

Pollination: The flowers are self-fertile, so you only need to plant one variety, although you may get more fruit with two varieties and the resulting cross-pollination. They are mostly pollinated by bees.

Pruning: Is done any time the plants are dormant. Plants bear most fruit on the previous years growth (though some is produced on 2 year old wood too) and pruning basically consists of cutting out any growth that is three years or older. This removes less productive wood and stimulate the growth of new shoots. Old growth is easy to identify by its darker color and is cut above a strong bud close to the ground. Usually ¼-⅓ of old growth is cut every year.

When pruning you should also remove any diseased or damaged shoots.

Watering: Blackcurrants need plenty of water for maximum production, so never let the soil go dry.  This is especially important in hot dry climates (use drip for best results).

Weed control: Hand pull large weeds and then rely on a thick 3” mulch to suppress the rest. Don’t hoe around the plants as their shallow roots are easily damaged.

Mulch: A 2-3” mulch of compost or aged manure is the best way to feed blackcurrants. It also helps to conserve moisture, keeps the soil cool and keeps down competing weeds.

Fertilizing: Blackcurrants are hungry plants and respond well to fertilization. They are usually fed with a mulch of compost or aged manure, but you might also give them a fertilizer mix (10lb/100sq ft) every spring.

Frost: If a late frost threatens to harm the early blooming flowers, you can protect them with row covers.

In their European homeland Blackcurrants are prone to quite a number of pests and diseases, but in North America only a few pests are of significance.

Diseases: Several diseases can be problematic.

Birds – I haven’t found birds to be a problem with blackcurrants (maybe it’s something to do with the fact that birds around here don’t know what they are), but apparently they can be in some areas. If this is the case you may have to net them or grow in a cage. Birds can sometimes be a problem in winter when they may eat the emerging buds.

Propagation: Blackcurrants are one of the easiest fruiting plants to propagate, just stick hardwood cuttings into the ground in fall and you will have small plants by spring. You can do this in a nursery bed, directly in pots or straight into the garden (if the ground stays moist enough they should root without a problem).

Hardwood cuttings are usually taken in autumn after the plants go dormant. They should ideally be from this seasons growth, 8-10 inch long x ½” thickness, with a slant cut on top and a flat cut on the bottom (so you know which way is up). They are planted 6-8 inches deep, so only a couple of buds are showing above ground. When you plant them out the following year you cut them down almost to the ground and they send up several shoots.

Harvest; The fruit doesn’t all ripen at the same time so you may have to go over the bushes several times. Ripe berries are soft (though not necessarily sweet) and dull black. They stay on the bush for a while before they start to deteriorate.

Blackcurrants are self-pollinated, so you only need to grow one variety, but it is a good idea to have several (early, mid and late) to extend the harvest season.

Food uses: Blackcurrants are tart and most varieties are not very good raw (or should I say they are an acquired taste). However when cooked and sweetened they make outstanding fruit pies or preserves. It makes my mouth water to think about them, they are totally addictive.