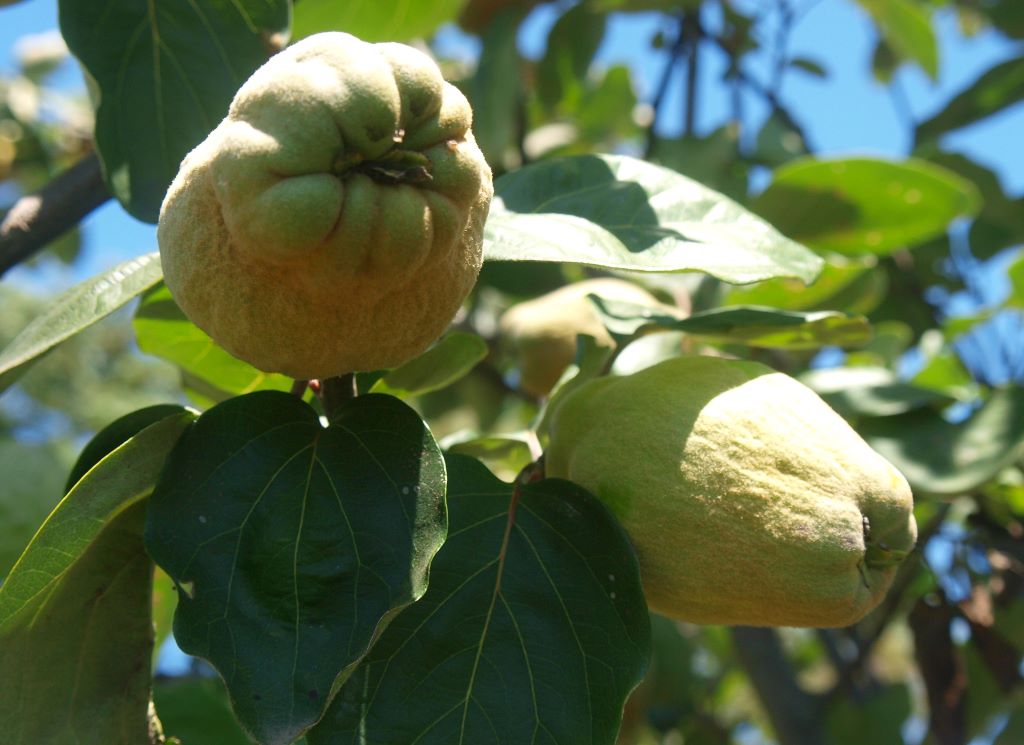 The fruit of the Quince looks like a large, yellow, fuzzy, slightly misshapen pear. It is not usually eaten raw as it is somewhat dry and astringent, but is usually cooked in preserves or added to apple pie.

Ease of growing: In the right conditions this easy to grow and independent little tree doesn’t take much looking after. In my garden it is almost completely ignored, yet it still produces fruit reliably every year.

Nutrients: Quince fruits are rich in vitamin C and pectin.

Climate: The Quince isn’t very fussy as to climate and does well almost everywhere (except deserts). It flowers quite late and so isn’t usually affected by late frosts. It is hardy to -20°F.

The quince prefers well-drained fertile soil and full sun, but it will tolerate light shade too. If your soil isn’t very well drained you might consider planting on a hillside, or on a mound.

When: In mild climates Quince trees these can be planted at any time from late fall to early spring. In colder climates they are usually planted in spring. As with most other plants a small tree transplants better than a large tree and will do better in the long run.

Maintenance: Quince trees don’t need a lot of attention, but are more productive if given some basic care.

Fertilizing: They aren’t very hungry trees and don’t usually need additional fertilizer. In fact too much nitrogen can stimulate vigorous succulent growth that is susceptible to fire blight.

Watering: The trees are quite drought tolerant, but will be more productive if given regular water.

Pollination: Quince is self-fertile so you only need to plant one variety.

Pruning: Quince is usually trained to an open center, It is terminal (tip)? bearing, which means they produce fruit at the end of new growth and can be grown with minimal pruning.

Thinning: They rarely produce so much fruit that they require thinning.

Propagation: Quince is usually grafted or budded. . It may also sometimes be grown from cuttings?

The roots are sometimes used for growing pears and other related fruits,

Mulch: Use a mulch of compost to keep the ground moist, suppress weeds and add nutrients.

Pests: Quince is susceptible to the same pests as the apple (notably codling moth), though they are less frequently affected. In warm humid climates they are susceptible to fire blight.

When: Fruit are ripe when their color changes from green to yellow and they develop their characteristic fragrance.

How: How? The fruit bruises easily so handle carefully.

Storage: The fruit will usually stay in good condition for a month or more. Canned, frozen?

Landscape uses: With its big, beautiful spring flowers, attractive shape and interesting yellow fruit, the quince is one of the more ornamental fruit trees. It also espaliers well and is very attractive when grown in this way.

Varieties: There aren’t a lot of varieties.

Pineapple: This Burbank variety is supposed to cook down like an apple.

Quince would be more popular if people realized how good it was, which means having good ways to use it. They are hard and pretty much inedible raw, but good cooked.