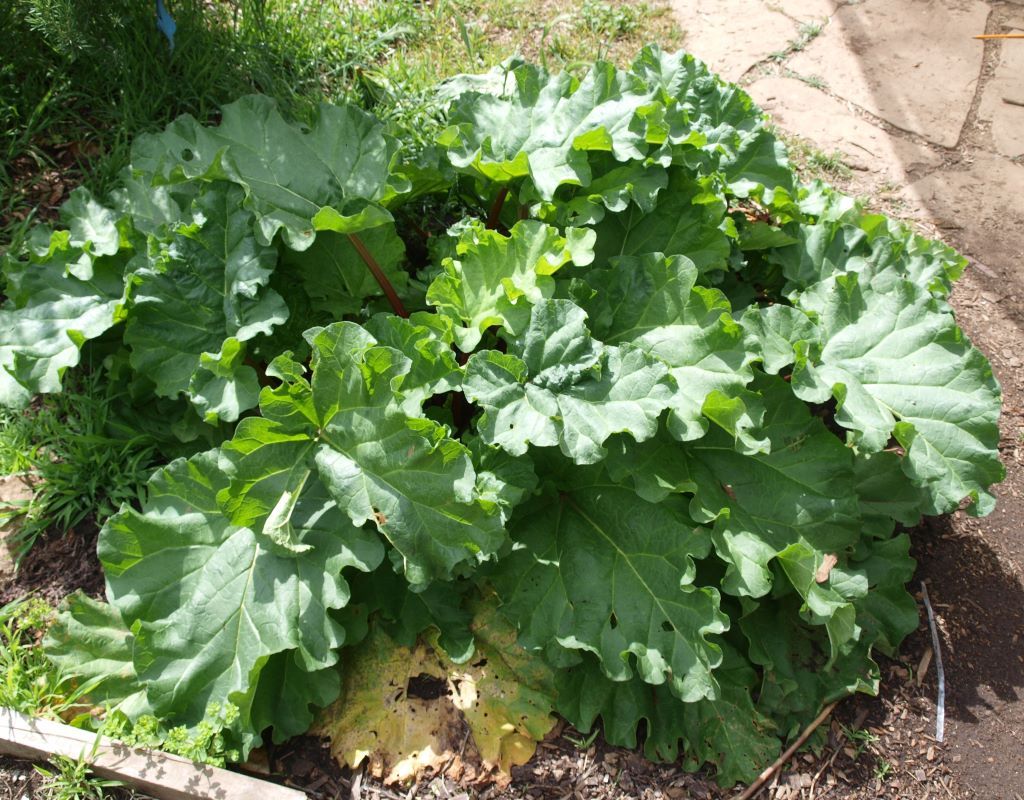 Introduction: Rhubarb was first grown in gardens for medicinal purposes, but later began to be eaten as a food. It eventually became popular in the cooler areas of northern Europe as a substitute for fruit in desserts (it can be harvested early in the year, before any real fruit is available). Presumably this only happened after cheap sugar became available to sweeten it, as it is very sour.

Rhubarb is quite an acquired taste and some people can’t see any virtues in it at all. However others, usually people who have grown up with it, come to love it (and even crave it in spring).

Ease of growing: If your climate is right this perennial is one of the easiest things you can put in your garden. Just put it in the ground and it will grow and produce.

Nutritional content: Rhubarb contains vitamins C and K, as well as magnesium, calcium, potassium and manganese. It is also rich in fiber. It contains about 100 calories per pound.

Rhubarb also contains oxalic acid, which can prevent the absorption of calcium. This is a relatively minor effect however and nothing for anyone with a reasonable intake of calcium to worry about.

Climate: Rhubarb is native to Siberia and so very hardy (to -20°F). It prefers cool moist summers (no higher than 75°F) and cold winters (below 40°F) with some freezing. When growing in cool climates rhubarb needs a sunny site, where it won’t get too much frost (which could delay early harvests). In hotter ones it benefits from some shade during the hottest part of the day.

Rhubarb can deal with a long period of hot dry weather by going dormant, though of course this doesn’t do anything for its productivity.

Rhubarb is a heavy feeder and prefers a deep, rich, moisture retentive soil with lots of organic matter. It needs to be well-drained, otherwise the roots may rot over the winter (raised beds help in this).

Soil preparation: Rhubarb is a perennial and will be in the ground for a long time, so you should incorporate lots of organic matter into the soil before planting. You might even double dig to get some of that organic matter down deep. You could also add some organic fertilizer mix to supply additional nutrients.

Where: Rhubarb is in the ground for a long time, so choose a site where it won’t be disturbed. It should be well away from shrubs or trees, whose roots might take nutrients away from it. If the soil is not well-drained, you should grow it on a raised bed. Don’t use a raised bed in a warm dry climate though, as it will dry out too quickly.

I grow rhubarb in a far from ideal climate with hot dry summers and mild wet winters, and it still does surprisingly well. In this climate it does best with light shade, as the large leaves can lose a lot of water on a hot day. It also benefits from a cooler microclimate.

Growing from crowns: Rhubarb is usually grown from crowns, which are pieces of root with growing buds attached. The usual method of planting is to dig a large hole (three times the size of the plant) and heavily amend it with compost or aged manure and some fertilizer mix. The crowns are then planted so the bud is a couple of inches below the surface.

Growing from seed: Rhubarb isn’t often grown from seed, but this is easy to do. It germinates readily and the seedlings grow rapidly (in the tropics it has actually been grown as an annual!)

There are several potential problems with growing rhubarb from seed. One is that the plants take several years to reach useful size. Another is that it doesn’t come true to seed, so the seedlings will be quite variable, with some being inferior to their parents. Usually you select the best seedlings and propagate them vegetatively, while discarding the inferior ones (sow a lot of seed so you have plenty to choose from). You could even argue that the genetic variability is good.

Sow the seed 1˝ apart in a flat in a greenhouse, or in a cold frame (plant extra so you can choose the best plants for growing on). The seedlings grow quite quickly and will need to be pricked out when they have 3 – 5 leaves. When they are large enough, plant them outdoors in a nursery bed, taking care to water regularly during their first year. Plant out the best plants in their permanent positions the following spring.

Spacing: Rhubarb can get quite big and likes to have plenty of room so don’t crowd it. Overcrowded plants are more likely to have disease problems.

Rhubarb is a tough and independent plant and can survive with relatively little care, however it will be more productive if you give it a little TLC.

Weeds: Remove all perennial weeds from the bed before planting (this is one of the benefits of double digging). A mulch will take care of any annual weeds.

Watering: Rhubarb is a cool weather plant with large leaves and requires quite a lot of moisture. In dry climates it will need regular watering to keep it productive. If it doesn’t get enough water in hot weather the large leaves will wilt during the day and may even die back. If this occurs too often the plants may simply go dormant.

Fertilizing: Rhubarb is a heavy feeder, however an annual application of aged manure or compost (as mulch) should supply all the necessary nutrients.

Mulch: Apply a 2 – 3˝ layer of compost or aged manure annually. This keeps down weeds, conserves moisture and feeds the soil (which then feeds the plants).

Winter protection: In very cold climates a thick mulch of leaves or straw can be useful to protect the plants over the winter.

Deadheading: Any flower stalks that appear should be removed promptly to stop the plant devoting energy to seed production. Remove the whole flower stalk, not just the flowering top (otherwise it will keep trying to flower). Never let it produce seed as this would waste even more energy.

Thinning: Rhubarb is a long lived plant when growing in ideal conditions, but after a few years it can start to get crowded (the stalks will be smaller in size and may be affected by pests or disease). To avoid this the plants should be thinned every 3 – 5 years, by dividing them and removing excess crowns (you can replant, give away or sell these).

Divide each root to leave at least one (and preferably 2 – 4) bud on each piece. Replant these so the top of the bud is covered with 2˝ of soil.

Forcing outdoors: In northern Europe it was once a common practice to force rhubarb. This would give an early crop, up to 6 weeks before the unprotected plants. This was done by covering the crown (it stayed in the ground) with a bottomless bucket (the lid was left on). Leaves, manure or soil was piled around the bucket to insulate it.

The resulting shoots were pale pink and extra succulent from being deprived of light. After the harvest, the bucket was removed, a layer of mulch was applied and the plants were left to continue growing as normal.

You can hasten spring growth by covering the plants with clear plastic.

Pests: Obviously any time you have a problem with a perennial plant it is more serious than with an annual. Rhubarb is relatively pest free, but you may occasionally have problems with Japanese beetles, or leafhoppers.

My biggest problem has been with gophers. These rodents will completely destroy a plant, which is a problem in a plant that takes several years to grow. If you live in gopher country you should plant rhubarb in wire baskets.

When: Don’t harvest any stalks in the first year after planting and only a few in the following year. This gives the plant time to grow as big as possible, so it produces large, succulent stems. In the third year you can start harvesting regularly.

You harvest the stems after they have reached full size and the leaves have opened fully.

How: Harvest by twisting the stalk, so it separates from the root. You then remove the leaf otherwise it will draw moisture out of the stalk and it will quickly go floppy. You have two options in harvesting:

You can either harvest all of the stems on a plant at the same time (and then leave it for a long period to recover.

Alternatively you can take 3 – 4 stems from each plant (never taking more than half of the stems from a plant at one time). In this way you can harvest fairly regularly.

Some people harvest intensively for about two months in spring and then leave the plants alone so they can build up reserves of food. This makes sense, as real fruit becomes available later anyway.

Storage: The stalks will keep for a week or so in a plastic bag in the fridge. They can be kept fresh by keeping them upright in a jar of water. For longer term storage they can be chopped and frozen.

Seed saving: Rhubarb produces seed readily if you allow it to; in fact the usual problem is stopping it. It doesn’t often self-sow, but doesn’t need to because it is a long lived perennial. The wind pollinated flowers are hermaphrodite (have both male and female parts).

Ornamental: Rhubarb has a strong bold shape and can be useful as an ornamental (though picking the stalks won’t help its appearance).

Wild garden: Rhubarb is a good plant for the wild or forest garden because it tolerates light shade (though in cooler climates it will do best in sunny clearings). It is a very independent plant and often survives in abandoned gardens for years.

Containers: Rhubarb can do well in containers, though you have to give it a large one and plenty of water and nutrients.

Protection: You can speed up the growth of rhubarb in spring by covering the bed with a cloche.

Rhubarb isn’t a hugely popular crop, so there aren’t that many.

Rhubarb is something of an acquired taste and you either like it or you don’t. It can be very sour and needs a lot of sugar to make it palatable. It is often combined with strawberries to make pie.