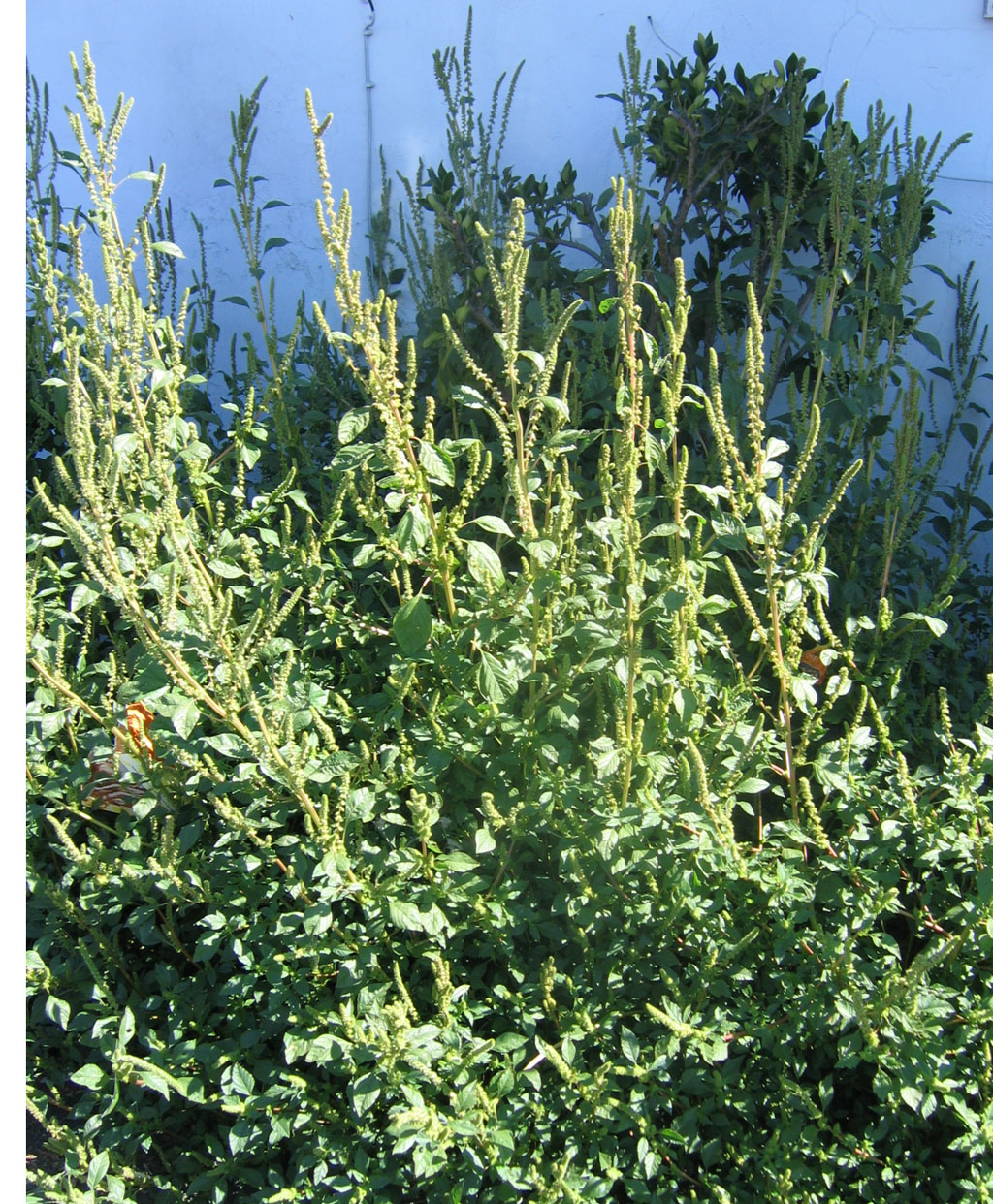 These are very common garden weeds in this country, but in South America, they were widely cultivated as an important grain crop, as well as a potherb. I discuss the use of the cultivated species elsewhere, but they are such important edible weeds, that I wanted to include them here too.

Amaranth seed has a better amino acid balance than almost any other common vegetable protein and even contains the lysine and methionine often lacking in plant proteins. It is also rich in vitamins and the minerals calcium, phosphorus and iron. The leaves are rich in protein, vitamins A and C, calcium and iron. The plant has made a comeback as a crop in recent years and amaranth cereals and cookies are appearing in health food stores and the seeds can be found in garden catalogs

Caution: The leaves contain oxalic acid, so should be eaten in moderation. One must also be careful about gathering the plant where chemical fertilizers are used, as they may accumulate nitrates and become toxic. Fortunately when used as a potherb most of these toxins are leached out, so they are unlikely to be consumed in dangerous quantities.

Seed gathering: Gather the seed by bending the ripe heads into a bag and rubbing out the dry seeds. For larger quantities collect the whole heads and leave them on a sheet to dry out. When they are completely dry beat or walk on them to thresh out the shiny black seed, winnow out the chaff and it’s ready to use. Native American women used to do all this in one operation, the whole spike was stripped off into the hand and the chaff was blown away to leave clean seed. If birds were a problem they would tie the ripening flower spikes together.

Seed use: Unlike many wild seeds those of Pigweed need no preparation except cleaning. However toasting improves its flavor and causes it to pop like popcorn. This can be done in a hot pan in the same way as for popcorn (if it won’t pop try sprinkling a little water onto the seed). If you have a large quantity of seed, spread it a half inch deep in a pan and roast it at 350-degree oven for a half-hour, stirring occasionally.

The popped seed can be added whole to baked goods, ground to flour for baking and gruel, The whole raw seed can be sprouted like alfalfa until about one quarter inch long and used in salads and sandwiches. It can also be boiled like millet in salt water. Some people soak it in water overnight before cooking.

Greens: The tender young spring leaves and growing tips are good until the flower appear and may be used in salads, or boiled for 5 ‑ 10 minutes as a potherb. Older leaves may be added to soup, or boiled as a potherb for 20 minutes.

Probably the best way to cook Pigweed greens is to sauté some onion and garlic in a pan and then add the washed greens. The water sticking to the leaves will be enough to cook them. If you plan to serve these to guests you might want to call them something other than Pigweed, maybe Chinese Spinach.

The leaves are a useful addition to green drinks (see Comfrey ‑ Symphytum).

Medicine: The mildly astringent leaves have been used as a poultice for wounds, insect bites and stings. These wind-pollinated plants often cause hay fever.

Animal food: Wild Pigweeds are an important food source for many wild birds and have been planted or encouraged to help feed domestic fowl. The foliage is a valuable feed for livestock.

Crop uses: Some Amaranthus species are becoming important crop plants once again. They originated in the tropics and use C4 photosynthesis, which makes them more efficient in the high heat and light intensities found there. Consequently they can produce a lot of food in a limited area. Individual seed heads from cultivated plants may weigh up to five pounds each and the plants may yield up to two pounds of seed per square yard. Not many North American tribes cultivated Amaranths, but they did encourage them to grow nearby by scattering seed in suitable places.  If you have the space this is still a good way to grow them. Some cultivated varieties have white seed instead of black.

A number of species are cultivated as warm weather substitutes for spinach. Look for the seeds under the names Tampala, Chinese Spinach or Hinn Choy.

Cultivation: Sow the seed directly in rich soil, after frost danger is past and the soil is warm. Once established they grow like weeds and produce ripe seed heads in 3 ‑ 4 months. They self-sow readily.

Some species are serious agricultural weeds. They produce an abundance of long-lived (up to forty years) seed and can out-compete almost all crop plants.