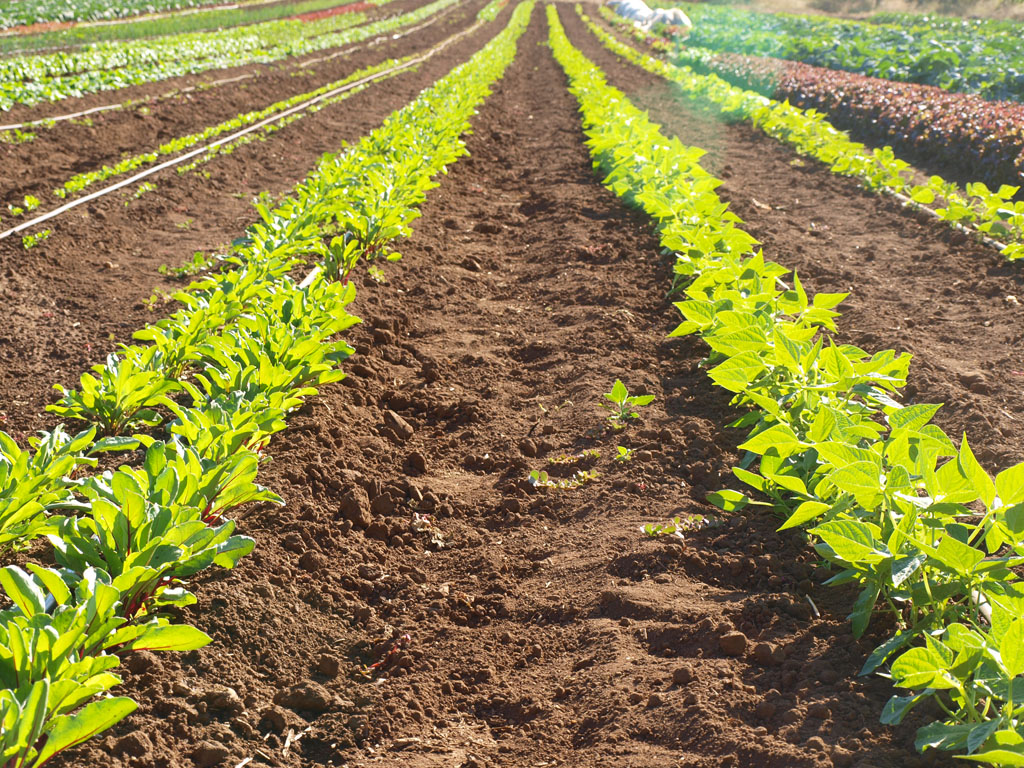 Row gardens were the normal way to grow vegetables for generations of American gardeners, but have fallen out of favor in recent years, to be replaced with intensive beds. The reason for this has nothing to do with the inferiority of row gardening, but is linked to the way people now live. They tend to have smaller gardens and a few raised beds fits in better than a large row garden. Also most modern vegetable gardeners aren’t trying to grow a lot of their own food, they are simply supplementing shop bought food, with some superior home grown treats.

Row gardens were developed by people who lived on farms, or on large lots in the country  They require less work, water and other inputs than more intensive ways of growing and work better if the soil isn’t very fertile.

A row garden has a path between each row of plants, which would appear to make it less efficient in terms of space used (bed gardeners claim this is the case). However the space taken up by paths isn’t really wasted, as the crop plant roots will go into them to find water and nutrients. This means each plant has a greater volume of soil to obtain water and nutrients from and there is much less competition from neighbors. There may be some compaction from walking between the rows, but it will be spread out and generally light. The greater amount of space and less competition, means that the plants generally need less looking after.

To grow row crops you need a bigger area than you would for an intensive garden, because the plants are spaced further apart. There will also be more weeds because there is a greater area of soil, but an optimist will look upon this as more edible weeds. I have heard the argument that row gardens are easier to weed because there is more room, but a larger area of disturbed soil pretty much guarantees plenty of weeds.!

A large row garden is the easiest way to grow enough food to live on. If you are aiming to feed your whole family or community, or to grow food to sell, this is usually the way to go. You will need quite a bit of space though, because not only does each plant require more space, but you will be growing things in greater quantity, almost like a small farm.

Row gardening was first used as a way for farmers to easily grow large areas of crops and lends itself to mechanization. Even at the home garden level you can benefit from this aspect, by using a wheel hoe and a seed planter (and perhaps a tiller).

This kind of garden is more gopher resistant than a row of unprotected intensive beds, because the plants are further apart. This means gophers have further to go between each plant, which gives you more time to catch them (this is good because it is much harder to put gopher wire under the rows).

Planting in widely spaced rows allows for good air circulation, which can reduce problems with disease. This can be significant in humid areas.

Row gardening allows you to use a low tech flood irrigation system.

Row gardens lend themselves to seed saving because the plants are further apart and it’s easier to prevent cross pollination, than it is in a closely packed intensive garden.

Row cropping can often involve less expense that using raised beds, because you tend to make use of what already exists. You don’t buy wood to make beds. You don’t import as many amendments and fertilizers.

Row cropping works well with any crop that needs a lot of room.

It also works for vining crops such as pole beans, peas and cucumbers as you can build a trellis for them.

It is also good for crops that benefit from earthing up such as potato, sweet potato and Jerusalem artichoke. It’s much easier to earth up plants in rows, as you can pull soil up over them from both sides.

Traditionally a row garden is started afresh every year, which in this country usually means laying down a layer of compost or other organic matter and then incorporating it into the soil. This is most often done with a rototiller or tractor, simply because of the size of the area to be cultivated.

If you are starting a new garden on an area that is covered with grass or other thick vegetation, you will need to till in several passes to thoroughly incorporate all of the surface vegetation and amendments (don’t do this if any pernicious weeds are present, as you will simply propagate them.) Wait at least two weeks for the buried plants to decompose (any less and it may start to grow again) and then till again to bury anything that survived on the surface. In some cases you may have to do a third tilling two weeks later. The idea is to bury and kill all of the weeds.

If you don’t want to use a tiller, you could dig a row garden by hand. In other parts of the world gardeners commonly dig large areas of the soil manually every year (they also talk about the necessity of getting in shape to be physically able to do it.) This is perfectly doable if you are reasonably fit and take it gradually. Do a little bit each day (this can increase as you get stronger) and it is surprising how quickly it gets done.

An alternative to annual digging, is to create permanent “beds” and use heavy mulch to suppress weeds and add organic matter (more on this in a moment).

You don’t have to plant everything in rows

Some people argue about the relative merits and drawbacks of rows versus beds and everyone seems to have their favorite. However there is no rule that says your garden must be either one or the other (if there was I would ignore it.) There are a number of options that fall in between the two, but are worth considering (and have been used very successfully).

At the one end of the spectrum we have single rows of plants, which vary in width according to the size of the plant being grown. The area between the rows provides access for planting, weeding and harvesting. You don’t have to use all of these spaces for paths though. If you use some for paths and avoid walking on the others, you can reduce compaction.

Next we have wide rows 12” – 18” wide and 4” – 6” tall, each separated by a path you can walk down, to plant, weed and harvest. These work best for small crops, such as carrot, radish and salad mix. You can use compost or aged manure to gain the extra height, along with a little extra soil from the paths if necessary.

Narrow, slightly raised beds about 18 – 24” wide and 6” high can be used for planting double staggered rows of bigger plants such as tomatoes. They also work well for trellised beans or peas and for broadcasting small seed such as salad mix, beets, lettuce or spinach.

Wider beds 48”- 60” across can be used for large crops such as corn or quinoa. These are also very well suited to growing grains. Of course you could simply broadcast a large area of grains, but using beds gives better access to the plants. Some commercial market gardeners create beds with a tractor and then plant in rows on the beds. You could garden in this way too.

Finally at the other end of the spectrum we have permanently established wide raised beds, as I have described in the previous chapter.

There is one other option and that is planting in hills. These are actually small mounds, spaced several feet apart in each direction. They are quick to make and are the easiest way to grow space hungry sprawling vines such as winter squash and melons. Be sure to keep them far enough away from your other crops, otherwise they may invade your rows. See Direct sowing for information on planting in hills.

If you till / dig the soil annually, you don’t have to pick just one layout and stick with it. You can use a mix of different layouts, simply making the right sized beds for whatever you wish to grow. One garden could have a number of carefully prepared and double dug garden beds, as well as single rows for potatoes, double rows for tomatoes, wide rows for carrots, hills for squash and very wide rows for grains.

If you want to have permanent raised beds, then having different sizes doesn’t work so well, as it makes it harder to rotate crops. In this case you should probably choose an intermediate size, such as 18” – 24” (though 48” might work too) and make them all the same.

Planting is pretty much the same whether you are growing in rows or beds of course and I have covered this elsewhere. When planting rows it is advisable to use a string line to keep the rows straight and evenly spaced.

A large garden area can grow a lot of weeds, so mulching can be a big help (it also feeds the soil of course). You will need a lot of mulch though, because it is a big area to cover. You may want to spend a little time locating and stockpiling plenty of mulch, so it is available in sufficient quantity when you need it.

It’s a good idea to lay down newspaper (5 layers) or cardboard on the paths underneath the mulch to maximize its weed suppressing ability.

If you don’t have a thick mulch covering the entire garden, you are going to have to do some (or a lot of) weeding. A wheel hoe can be a big help, as it is designed for this specific purpose. See Weeds for more on this.

At the end of the growing season the garden should be planted to a cover crop (ideally a mix of grasses and nitrogen fixers). This will protect the soil over the winter, prevent leaching of nutrients and add organic matter.

In spring the cover crop is usually incorporated into the soil while preparing the garden for spring planting.

I think some form of hybrid bed / row / mulch / no dig garden is the way to get the highest productivity with the least labor and inputs.  It is also probably the best approach to growing large gardens for self sufficiency. I have just begun to explore the possibilities of this, but it may well be the subject of my next book.