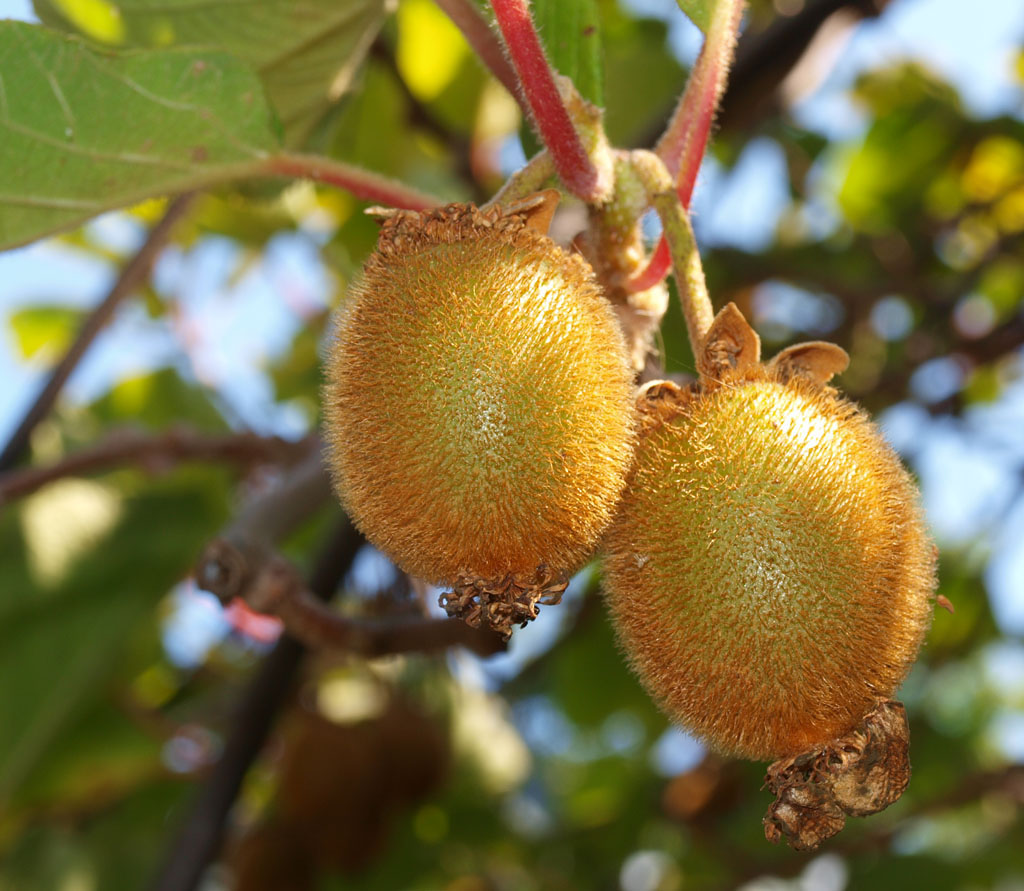 Introduction: The Kiwi vine was almost unheard of as a garden fruit only a generation ago, but is now quite common in many areas. The deciduous vines grow rapidly once established, but need a few years (5 or more) before they start to produce much fruit. It is dioecious (with male and female flowers on different plants) so you need female plants to bear fruit and a male plant to pollinate them

History; The Kiwi Vine was once known as Chinese Gooseberry because it originated in China (though it is nothing remotely connected to Gooseberries). It is now associated with New Zealand because it was first popularized as a commercial fruit there.

Nutrition: Apparently the fruit contains 10 times as much vitamin C as a lemon.

Ease of growing: Kiwi is pretty easy to grow in the right climate. The biggest problem is that they are so vigorous they require a lot of space and need a lot of pruning for maximum fruit production (though you can just leave them be and they will still produce well enough).

Climate: Kiwi vine needs a long frost free growing season (ideally over 200 days), with fairly mild winters (though cold enough to supply sufficient winter chill), a mild spring and fall and a warm summer. Female plants are hardy to 10°F and the males to 15°F.

Site: Kiwi vines grow quite well in part shade (in very hot climates this is even beneficial) but need full sun for maximum production. In a hot climate it’s a good idea to plant the tree on the northern side of its support to give it shade while young. Don’t plant in frost pockets as they are vulnerable to late spring and early fall frosts. If your soil isn’t very well drained you might consider planting on a hillside, or on a mound. These grow to be large vines and can get battered by strong winds, so give them a sheltered spot.

If space is very limited you could just have female plants on a trellis and put the male plant somewhere else (maybe on a fence or even growing up a shade tolerant tree). It just has to be within 50 ft of the females.

These plants will grow in most kinds of well-drained soil, but will be more productive if it is fairly fertile soil.

Soil preparation: These vigorous and productive shrubs can use a lot of nutrients, so if the soil isn’t very fertile you may want to dig the entire planting area and incorporate lots (at least one wheelbarrow every 2 square yards) of compost or aged manure (also wood ashes and maybe a fertilizer mix). This works much better than simply amending the planting hole, as it encourages the trees roots to spread out.

Planting: Kiwi can be grown from bare root plants? while they are dormant from fall to early spring. They are also available as potted plants too and these can be planted any time.

Planting is pretty simple, just dig a hole twice as wide as the root ball and the same depth, so the plant will be at the same height it was in the nursery. If your plant was in a pot make sure you unwind any roots that have started to circle the root ball. Make sure you fill in the hole carefully, without leaving air pockets. Water thoroughly afterward to settle the soil and help the plant to get established.

Formal training: After planting you normally cut the plant back to a vigorous shoot about a foot high. This will grow rapidly and can be trained up the post of the trellis. When it reaches the desired height you cut out the growing tip and train two new shoots to grow horizontally. The following winter these can be cut back to leave up to 20 buds (if you have them). These are allowed to grow to the end of the trellis and then the growing tips are cut out.

The male plant is only there to produce flowers and doesn’t need nearly as much space as the fruiting females.

Mulch: The vines benefit from a deep mulch to supply nutrients, conserve water and keep down weeds. Keep the mulch away from the trunk as it is susceptible to crown rot.

Support: Kiwis are large vines and can produce a considerable weight of fruit so they need a strong and stable support structure. The usual support is an arbor which will also provide summer shade and be ornamental as well. They can also be grown along a fence or on wires stretched along T bars (this must be strong though).

Maintenance: This mainly consists of keeping these vigorous vines pruned and remain within bounds. You may also have to tie branches to their supports.

Fertilizing: These are very productive plants and to keep them producing well they will probably need fertilization. Give them a source of nitrogen in early spring and again in midsummer (later applications aren’t a good idea as they can stimulate the late growth of tender wood). Use a fertilizer mix as a top dressing, scattered all around the plant. Of course a thick mulch of compost or aged manure will also supply nutrients (maybe all they need).

Watering; These large vines need a constant supply of moisture for good growth and production, so don’t let them get too dry. It is pretty obvious if the plants get water stressed as the large leaves start to slump and eventually wilt.

Pruning: Kiwis grow so vigorously they can require a lot of pruning to keep them under control, get them to the right shape and encourage flowering. This is most often done in winter, while the plants are dormant, because in spring the growing plants can bleed a lot. It’s also easier to see the plant when it doesn’t have leaves.

Basically pruning consists of cutting back a third of the previous seasons growth (not too much as this will produce flowers and fruit in the coming season).

The plants fruit on last years wood and pruning is done to ensure plenty of new growth to replace fruited canes. As the plants get older you can start removing tangled vines, weak vines and any that are out of control. Ideally you want to have some room (8-12 inches) between the fruiting branches.

During the growing season, each lateral cane will send out a new shoot about 1/3 of the way from its own starting point. The next winter, prune off the older cane at the point that it connects with last summers new shoot. This process repeats itself every year.

Summer pruning may sometimes be needed to keep these vigorous plants under control. Male plants are often pruned after they have flowered, to control their growth and stop them competing with the female vines.

Fruit may also appear on the bottom few buds of the current seasons growth.

Pollination: Kiwi plants are dioecious (male and female flowers are found on different plants) so you need female plants to bear fruit and a male plant to pollinate them (a ratio of 8:1 works). This species can also pollinate other Kiwi species.

Pests: Kiwi has relatively few pests when grown as a garden crop.

Harvest: A nice feature of Kiwi vines is not just that they produce a ton of fruit (though they usually do), but that they produce it late in the year (November to January), after most other fruit is done. You can allow them to ripen on the vine, but it’s better to harvest them before they are fully ripe and ripen them inside (you can control the ripening time). You will have to experiment to find the right time to pick (early fruit won’t be as sweet and tasty, while older ones may start to ferment).

The unripe fruit can be stored in a cool place until needed (the fridge works). You can then bring them into a warmer room to ripen fully. When treated in this way, you may be able to get them to last until March.

Landscape uses: These vigorous vines are excellent for covering arbors to provide summer shade (most of the shade disappears in winter because they are deciduous) and of course delicious fruit. The only other fruit that comes close to being as valuable for this is the Grape.

Varieties: The commonest varieties for years have been Hayward and Chico, with Vincent a lower chill type. Tamuri? Is a common low chill male.