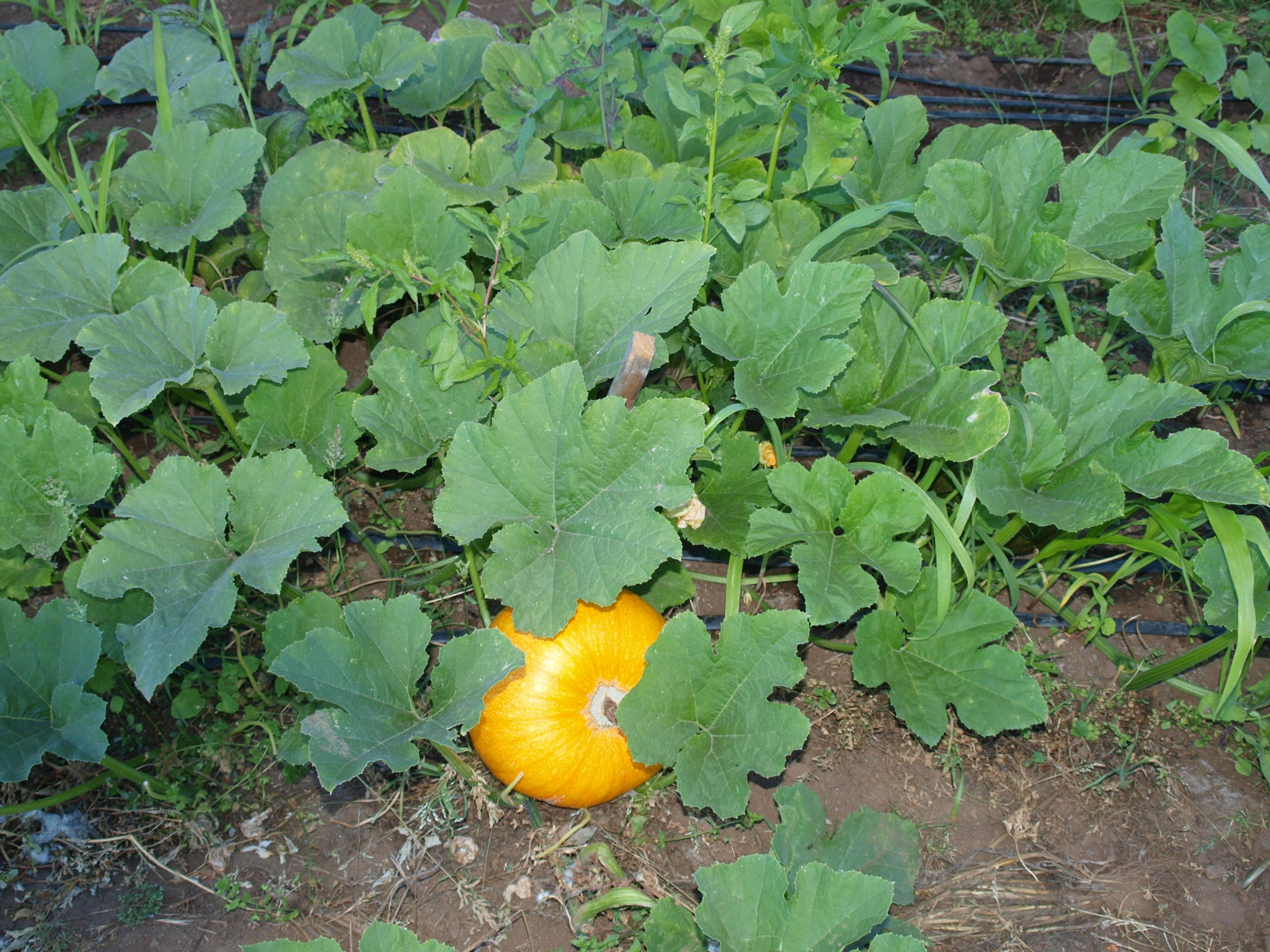 Introduction: The winter squash and pumpkins belong to various species, including C. pepo, C. mixta, C. moschata and C. maxima. They are grown in pretty much the same ways as the summer squash (some types are actually the same species), so if I don’t mention something here it is because I already covered it there.

Winter squash get their name because they were the squash you ate during the winter (even though you grew them in summer).

Nutritional content: The fruits are rich in complex carbohydrates (180 calories / lb), beneficial fiber, vitamins A, several B’s (including folate) and C. They also contain copper, iron, magnesium, potassium and zinc. Some are also a good source of antioxidants and other phytonutrients. They contain about 150 calories per pound.

The seeds are rich in protein and beneficial oils and contain about 2500 calories per pound. This could mean the seeds inside the pumpkin contain more energy than all the rest of it.

Ease of growing: Winter squash are easy to grow if the weather is warm and they aren’t attacked by squash vine borers or hordes of squash bugs, all of which can make life difficult.

Once established these vigorous and fast growing plants can compete with any weeds, so long as their roots are in good soil and they are well fed and watered.

Crop value: Winter squash can be a valuable plant for those aiming for greater food independence. They produce two useful foods, the flesh of the fruit and highly nutritious edible seeds. They are easy plants to grow, quite productive (for the amount of work they require) and easy to store.

Winter squash do require quite a lot of space, but they are willing to share it with other plants. Native Americans traditionally grew squash with corn and beans in a polyculture they called the three sisters. This is a good space saving idea, as they produce almost as well as when growing alone. See Three Sisters in Corn for more on this.

Where: Winter squash grow to be large sprawling vines, so don’t plant them in the middle of the intensive garden. The best place for them is out on the edge of the garden where they can run off into unused space without causing trouble. If you don’t have this option they will take up a lot less space if grown vertically on trellises or cages. Of course they will then require extra work to grow (and may create shade).

If you plan on growing a lot of winter squash you will also need somewhere to store them.

Starting inside: Winter squash are often started indoors to get a few extra weeks of growing time (which can be important in cool climates). The naked seeded varieties of pumpkin rot easily unless given ideal conditions and so are usually started indoors. See Summer Squash for more on this.

Direct sowing: You only need to plant winter squash once in a year, so do it properly.

Hills: The traditional method of growing squash is in hills, which are small mounds. Prepare the hill by digging a hole 24˝ wide by 12˝ deep and half filling it with compost (line it with a gopher basket if necessary). Then return the soil to the hole to create a low mound with a depression on top. Plant 4 – 6 seeds (½ – 2˝ deep depending on how warm the soil is) in each hill and thin to the best 2 or 3 when they have all germinated.

In hot dry situations hills don’t work so well, as they tend to dry out quickly. In this situation you may find it best to flatten the hills out, or make them into slight depressions (use the same process though). Then any irrigation water will moves toward the plants, rather than draining away from them.

Spacing: Winter squash hills are usually spaced 4 – 6 feet apart. The exact distance depending on the variety and the fertility of the soil.

If the plants are to be grown up supports they can be planted closer together, perhaps as close as 30˝ apart.

Weed: Once the plants get going they are vigorous enough to look after themselves. You need to keep the young plants weeded though.

Water: Winter squash are fairly drought tolerant, but do better if the soil is kept evenly moist, especially in dry weather.

The big leaves of these plants wilt very easily in hot weather, but recover equally easily when the temperature drops. If they don’t it means they need water (or you have a problem with pests or disease).

Fertilization: If your soil isn’t very fertile you may want to feed the plants every 3 weeks with compost tea or liquid kelp.

Pruning: About a month before frost is due, pinch back the growing tips. This ensures the plants put all of their energy into ripening the fruit they already have and won’t start any more.

To get larger fruit you simply limit the number of fruit they produce. Do this by pinching off unwanted female flowers and small fruit.

Frost protection: These tender plants will be killed by freezing temperatures. If an early frost threatens give them protection by covering with frost blankets or mulch.

Pests and diseases: They are bothered by the same pests and diseases as the summer squash, but slightly less so. Squash vine borers seem to prefer C. pepo species to the others.

When: Winter squash must be fully ripe for optimal flavor and keeping qualities. It takes 2 – 3 months from pollination to full ripeness (up to 4 months for pumpkins).

The fruits are normally gathered after the skin turns dull and the dry stem snaps easily. For good storage properties the skin must be too tough to dent with a fingernail. If they are not fully mature they won’t store well. The fruits must also be picked before frost does any damage.

How: Cut the ripe fruit from the vine, leaving about 6˝ of stem attached.

Seed saving: This is the same as for summer squash. It takes time for the fruit to ripen properly so allow plenty of time for them to mature before frost.

Three Sisters: Winter squash are the third sister (the others are corn and beans) in this Native American polyculture. See Corn for more on this.

Volunteers: Squash occasionally volunteer and produce healthy young seedlings. Unfortunately you probably don’t know if they crossed with anything and may end up with a pretty strange fruit (of course you can try eating it anyway).

Screen: You can train the vigorous climbing varieties along a wire fence to make a deciduous screen.

Giant fruit: To grow giant show pumpkins plant several seeds in a hill made from almost pure compost and thin to the best plant. Feed weekly with manure tea or liquid kelp and allow only one fruit to develop on each plant. You could allow three to grow if you just want big ones for your own use.

Signature: You can scratch your name on a squash or pumpkin and it will get bigger as the fruit matures.

Soil cleanup: These plants are very efficient at absorbing polycyclic aromatic hydrocarbons (such as benzene) from the soil. If you grow the plants and then remove them, you can remove these contaminants from the soil.

Most winter squash are of the sprawling vining type, though there are some bush varieties that require less space.

The fruits vary greatly in their eating qualities; some are excellent and some are rather bland.

Cucurbita maxima – These large vines have very big rounded leaves and soft hairy stems. They can be distinguished from C. moschata because the leaves are rougher in texture and their margins are more ragged. Also the stem on the fruit is swollen.

Cucurbita moschata – Another large spreading plant, the leaves are softer than the above and more entire. The flowers have large sepals. The stem of the fruit is 5 sided and distinctly flared.

Cucurbita mixta – This species resembles C. moschata (some people say it is the same) but the leaf tips are more rounded and the 5 sided fruit stem doesn’t flare out as much.

Cucurbita pepo – This species includes the summer squash varieties as well as several interesting winter types. It is easily distinguished by its prickly stems (all the others have smooth stems), prickly lobed leaves and the hard angular stem on the fruit. They are more vulnerable to squash vine borers than other types.

Immature acorn squash can be picked and used like summer squash.

The mature fruits were once an important winter food in some areas.

Squash flowers can be dipped in batter and fried.

The seeds are all edible and may be roasted at 160°F for 20 minutes. The naked seeded types are most useful as they don’t need shelling.