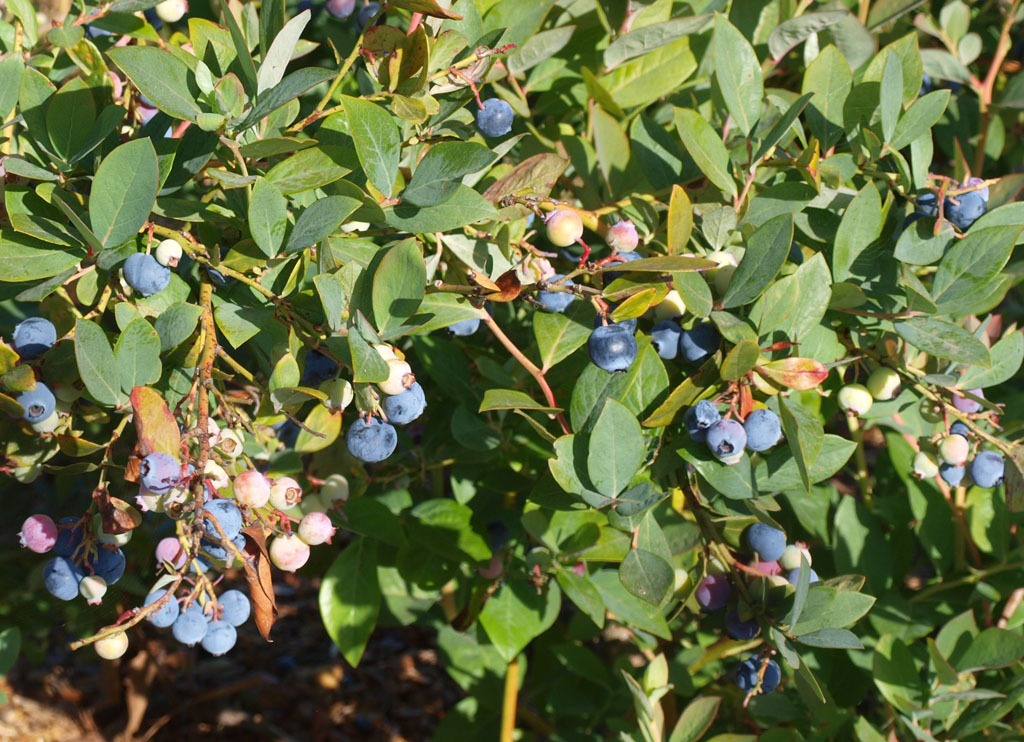 Introduction; This species can be amazingly productive at times, which is good because you can never have too many Blueberries

Nutrients: The familiar Blueberries are not only delicious, but also rich in antioxidants, anthocyanins and other special nutrients.

Spacing: 3-10ft apart (depending on height).

Ease of growing: This species can be pretty low maintenance in the right climate, but it is a plant where a small amount of work can reward you very well. Their main need is for an acid soil and maintaining the necessary acidity can be an ongoing thing.

Climate: Blueberries are fruits of cool northern climates and are very hardy (some varieties can tolerate -45°F without harm). However they tend to do better in milder climates, with warm summers and regular rain.

Site: Blueberries won’t grow very well in the rich, moist neutral soil that most other fruits prefer, because they are members of the acid soil loving Ericaceae family (they like the same conditions as Rhododendrons). They are most productive when growing in full sun, but tolerate some shade (in hotter areas they may even prefer a little shade). The flowers open over a long period, so they aren’t very vulnerable to late frosts. They prefer to be sheltered from cold winds.

The most important thing to remember about growing Blueberries is that they need an acid soil. If the pH isn’t low enough they may suffer from various nutrient deficiencies and won’t really thrive (they may even die). They also like lots of organic matter.

Blueberries can do well on poor sandy soil where few other fruits would. They need moisture at all times, but also good drainage (though can tolerate wet soil in winter). If your soil is clay then grow on raised beds and add lots of organic matter. If your soil isn’t very well drained you might consider planting on a hillside, or on a mound.

Soil preparation: If the soil isn’t very acidic you should incorporate lots of compost and other acidic organic matter (peat moss or pine leaf mold). Add at least one wheelbarrow every 2 square yards. You might also use sulphur or add vinegar to the irrigation water (2 tbsp/gallon). A mulch of peat moss, sawdust or pine needles is also good. Never. use lime which would raise the pH (if you need to supply calcium use gypsum).

Blueberries are mycorrhizal and depend upon their symbiotic fungi for good health. You can encourage the fungus by providing plenty of acidic organic matter.

Plant 2-3 year old plants (they recover from transplanting more quickly than older plants). These are sometimes bare root, but more often they are grown in containers. Plant in late winter or early spring.

Dig a hole large enough to accommodate the spread roots, position the plant, then re-fill with the soil. If the plants are bare root then mix 1/2 acidic organic matter into the soil you took out of the hole (not if soil is clay).

4-5 ft apart is typical, but it depends upon the ultimate height of the plant. If you are growing in rows you will want 6-10 feet between rows, depending on size of plants.

Watering: Blueberries are fairly shallow rooted, so it is important to keep the soil moist at all times for maximum productivity. The exact amount required will depend upon climate of course, but will be at least 1” a week. Use drip or trickle irrigation in dry climates. The plants are quite drought tolerant, though in dry situations they will produce less and grow more slowly.

Mulch: Apply a 4″ thick mulch of an acidic material such as pine needles, leaf mold or sawdust around the plants to conserve moisture, acidify the soil, keep down weeds, feed the plants and keep the soil cool.

If you mulch thickly weeds shouldn’t be much of a problem, though sometimes you get bird sown Blackberry seedlings appearing. The roots are shallow so don’t hoe around them.

The amount of growth and fruit they produce will tell you whether they need fertilizing. They will often benefit from a top dressing of a standard fertilizer mix, especially on poor soils. Their main requirement is for nitrogen.

Blueberries aren’t very vigorous plants, and don’t need a lot of pruning. Fruits are borne on the previous years growth, so you mostly prune to ensure a healthy amount of new growth every year. This mostly means cutting out the oldest branches down at ground level, or down to a vigorous branch.

You may also prune if growth gets too dense.

It is recommended that you don’t let them produce fruit for the first year or two (remove the flowers to prevent this).

Propagation: Blueberries are most easily propagated by layering or division (usually of suckers), but softwood cuttings can be used if you want a lot of plants (I haven’t had a lot of success with them though).

Seed can also be used for propagation and though it fruit won’t be identical to its parent, it will usually be good. It is best sown in fall in a flat filled with a potting mix (2 parts peat to 1 part sand) and left in a cold place. The seed will germinate in spring and when big enough the seedlings can be pricked out to give them more space. When they fill their second flat they should be pricked out into individual pots.

Pests: Blueberries are relatively pest free, with the notable exception of birds.

Birds: Blueberries are one of the all-time most favorite foods of birds. If you want to get a reasonable harvest they should be located fairly close to the house and netted when the berries are ripening. Alternatively they could be grown in a fruit cage (this isn’t very ornamental though). You can also try hanging bright flashing objects like shiny aluminum pie tins, mylar tape, old cd’s from the branches. You might also use inflatable predator balloons. These scare tactics don’t usually work for long though.

When: You can start harvesting fruit in the plants third year, but it will take 5 years for them to really get going.

The best way to tell when a blueberry is ripe is to eat one, if it is sweet and delicious it is ripe. Ripe fruit is soft, blue black and has a whitish bloom. For best flavor they should be left on the plant for a week after coming ripe, for their sugars (and flavor) to develop fully. Unfortunately if you have birds around they won’t wait this long, which is why netting is often needed.

How: Pick the individual berries form the plant, being careful not to damage the fruit or the plants. A berry comb can greatly speed up harvest.

Storage: The fruits can be kept for a few days in the fridge. They are very easy to freeze for use in cooking and also dry well.

Containers: The smaller varieties can do well in containers, so long as they have a suitably acidic soil mix.

Landscape uses: Blueberries are attractive shrubs up to 8ft tall, with a spread of up to 8ft. The glossy leaves, white flowers, clusters of blue berries and the bright red fall foliage all are attractive. They make good fruiting hedges.

Blueberries are self-fertile to some extent, but it is best to grow more than one variety to ensure good pollination (and hence abundant fruit set).

It is also a good idea to plant a range of early, mid- and late season varieties to extend your harvest season to several months.

Other useful Blueberry species include:

Rabbiteye Blueberries (V. Ashei) – These are more heat tolerant than the above and can be grown in warmer and drier climates. They also tolerate less acid soil. Some Rabbiteye varieties can get quite tall (to 12 feet or more). Winter chill 200-400 hrs Zones 7 – 9. They tend not be be self-fertile, so you should plant at least two varieties.

Southern Highbush Blueberry – This is a hybrid between the Highbush blueberry (V. corymbosum) with various southern species (V. ashei , V. darrowi). They grow from 3-6 ft tall. They are more tolerant of heat and require much less chill hours (so do better in mild winter areas), as well as being less fussy about soil conditions. They haven’t been around very long, but have had a big impact on commercial growers because they have greatly increased the area where blueberries can be successfully grown. Zones 7 – 10. They are self-fertile, but more productive if you plant at least two varieties.

The availability of varieties changes over time, but these are the most common at present:

Lowbush Blueberry (Vaccinium angustfolium) These are smaller, sweeter and less productive than the above. See Groundcover for more on this. 3 – 7