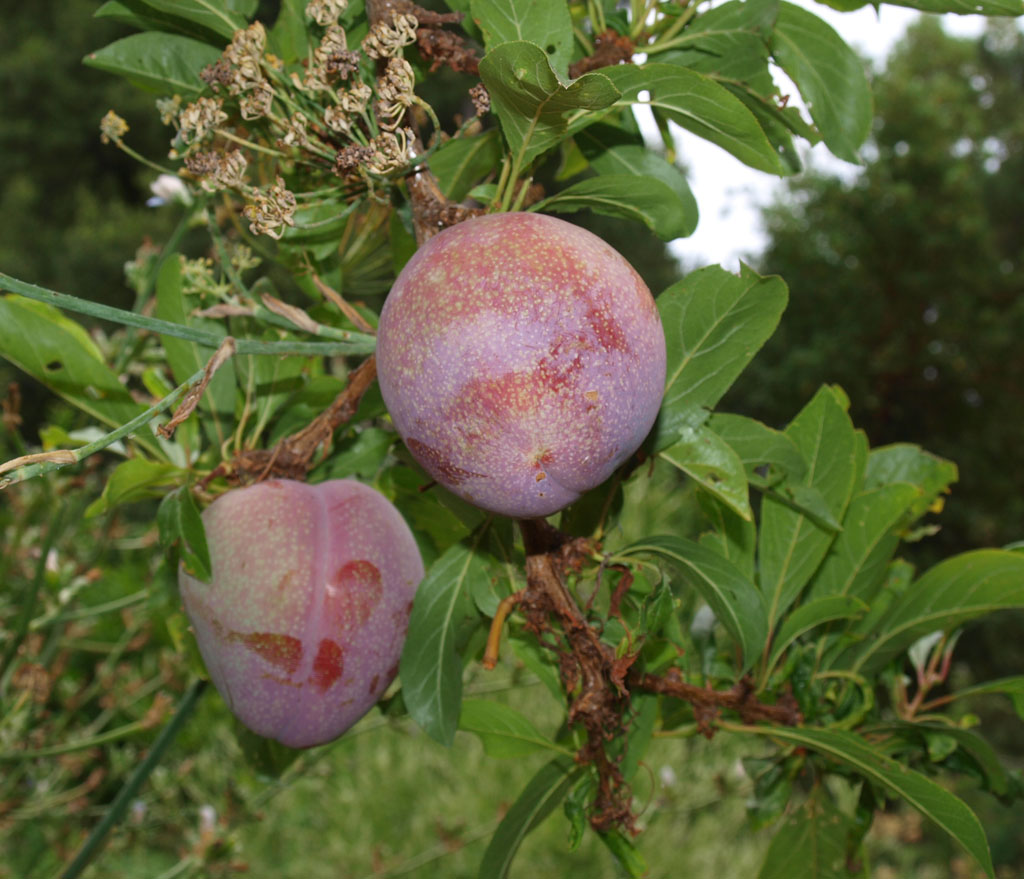 A tree ripened plum is one of the great treats of the summer garden and every garden should have at least one plum tree. Mine has at least nine and as a single tree can produce a lot of fruit this is quite a big eating commitment.

Life expectancy: 8-50 years depending on whereabouts in the country and on what site.

Ease of growing: In my garden the plums have been the most productive, consistent and easiest of fruits to grow. They just sit there looking pretty and produce lots of fruit in most years. They have also been one of the earliest species to start bearing heavily.

One problem with plums is they produce a lot of fruit in a short time (not necessarily a problem). If you have several trees, you should make sure you choose varieties that succeed each other (rather than all bearing at the same time).

Climate: Plums are a very adaptable species and breeders have produced varieties for every climate that gets enough winter chill.

The European Plums are very hardy (to -30°F) and actually do best in fairly cool climates (they bloom later than the Japanese types). The Japanese Plums are better suited to warm climates and like the same conditions as apricots, but with warmer summers.

Plums prefer a well drained, fertile loam, but will tolerate most soil types. European plums can even grow on quite heavy soil, but not Japanese types.

Site: Plums flower quite early and can be damaged by late frosts, so avoid planting in frost pockets. In cool climates they need full sun, but in warmer climates they will tolerate (or even benefit from) light shade. If your soil isn’t very well drained you might consider planting on a hillside, or on a mound. Plums can drop lots of messy fruit (if you don’t pay attention to harvesting), so it’s not good to plant them near paved areas.

Plums don’t naturally get very big and tend to be smaller than other common fruit trees (with dwarfing rootstocks they can be grown to any size). This means they fit well in the smaller garden, or in odd corners.

Soil preparation: If the soil isn’t very fertile you should prepare the whole growing area (not just the planting hole) by single digging (or even double digging if the soil is very poor). This enables you to remove perennial weeds and incorporate organic matter (compost or aged manure) deeply, along with wood ash and maybe some standard fertilizer mix.

In mild climates plum trees can be planted at any time from late fall to early spring. In colder climates they are usually planted in spring. As with most other plants a small tree transplants better than a large tree and will do better in the long run.

How: Dig a hole for the tree 2‑3 times as wide as the root spread and the same depth as the root (this gives the roots plenty of space). A tree should always be set in the ground at the same depth it was growing in the nursery. The graft union should be at least 3” above soil level. In poorly drained soils you may have to plant on a mound, to keep the collar of the tree from too much moisture, which could potentially cause it to rot.

Start planting by throwing a couple of shovels of soil (and possibly organic matter) in a mound in the bottom of the hole. You then hold the plant over the mound and spread out the roots evenly over it. Put some soil in the hole to anchor the tree in place and firm it down. You might want to add some rock phosphate to the soil as you re‑fill the hole. Fill up the hole with the rest of the soil (making sure the tree is vertical, then water to moisten the soil and help establish contact between roots and soil). When you have finished the tree should be on a slight mound, so as the soil settles it becomes flat (rather than a depression where water might collect). The final step is a mulch to conserve water, and keep down weed competition. It is also a good idea to put a permanent label on the tree saying the variety and rootstock (and write it down in a garden journal).

Conventional advice used to be to amend the planting hole with nutrients and organic matter “to give the tree a head start”, however this is no longer considered to be a good idea. In heavy clay soils it can result in a kind of container from which plant roots are reluctant to stray (they will simply coil around and around). This doesn’t tend to happen in lighter soils, but even there an abundance of nutrients may discourage the roots from spreading like they should.

Support: Newly planted trees were once routinely staked, but it is now thought that trees get stronger quicker if not staked. Staking may still be necessary in very windy sites though, especially for dwarf trees on weaker rootstocks.

Fertilizing: Heavily producing trees should be fertilized regularly with nitrogen and potassium. A mulch of compost or aged manure is good.

Watering: Plum trees should be adequately supplied with water for maximum productivity.

In dry climates they should be given a deep watering every few weeks. Young trees should be watered regularly (1” per week) until they are well established. Watering should be consistent and irregular watering can cause fruit to split.

Mulch: A mulch of compost or aged manure is useful to supply nutrients, conserve moisture and suppress weeds.

Pollination: Many European Plums are self-fertile, which means you only need to plant one tree to get fruit. However most bear heavier crops when cross-pollinated. Japanese Plums aren’t self fertile and require cross pollination from another variety that flowers at the same time (they won’t be pollinated by European Plum or vice versa).

Though plums are insect pollinated the flowers are not as attractive to bees as those of other fruit, so the trees should be planted fairly close to each other. The flowers appear quite early and are sometimes damaged by late frost.

Pruning: Plums tend to be tip bearers and so don’t need much pruning for fruiting. European types do well as a central leader and once the tree is shaped properly they don’t need a lot of pruning. Japanese types are very vigorous growers and need regular pruning to control their rampant growth. They are usually grown with an open center.

Some types of plums have a tendency to overbear (produce more fruit than they can handle) and pruning can help to prevent this. It can also be used to maintain a tree at a desired height.

The fruit is borne on long lived spurs.

Propagation: Selected varieties are budded or grafted on to desired rootstock. If you have a small garden several varieties can be grafted on to one tree. Cuttings can sometimes be used?

Thinning: My biggest problem with Japanese Plums has been their tendency to produce too much fruit (a heavy load of fruit can easily break a branch if not supported). Some fruit drop naturally before it is ripe (June drop), but you usually need to thin the enthusiastically too. The ideal is to have one fruit for every 4-6 inches of branch. This is usually done in one thinning to save time, but it’s probably better done in two stages if you have the time and patience (once when they are ¾” and again when they are 1 ½”). Be careful not to damage the branch when removing them.

European Plums don’t usually produce as abundantly that they need thinning, though it can happen.

Support: If the fruit load gets so heavy that the branches start to sag you may have to provide support. Broken branches not only spoil the shape of the tree, but may also allow infection to get a foothold. The usual way to support them is with a forked pole of suitable length (use a pad of burlap to prevent damage to the branch). You can also use one tall pole and tie successive branches to it (known as maypoling).

Mulch: This is important to add nutrients, suppress weeds and keep the ground moist.

Plums are fairly vigorous trees and in my garden they are rarely bothered by disease or pests. Quite a few problems are out there however.

Birds: Ripe plums commonly receive the unwanted attention of birds (especially in dry climates where they provide a source of moisture). The lighter colored varieties seem to be less attractive to birds than the darker ones (maybe they don’t think they are ripe enough to bother with). They may also damage buds in winter.

Bacterial canker: This can be a big problem in some humid areas, in which case you may want to grow a resistant variety.

Other problems: Plums flower quite early and are sometimes hit by late frost.

Harvest: Fruit ripens in 140-180 days. It can be harvested while slightly under-ripe and ripened indoors, or you can wait until it is soft and sweet on the tree. Ripe fruit will come away from the tree when tugged lightly or twisted (the stalk should come away with the fruit). Plums don’t all ripen at the same time, so you may have to pick several times to get them all.

Storage: Slightly under-ripe fruit may keep for several weeks (in a cool place) and can be ripened slowly. The ripe fruit only stays good fresh for a week or so. If you want to keep it for longer, you should dry or freeze it (how to dry non prunes easy)?

Landscape uses: Plums are beautiful when in flower and make great ornamental trees, but don’t put them over paved areas though, as the falling fruit can make a mess.

Rootstocks  Same as for ???Almonds, peaches?

You have several choices when choosing what kind of Plums to grow (and many varieties too).

European Plums (Prunus domestica) – These tend to be better suited to cooler climates, but can also do well in warmer ones. They are usually self-fertile.

These are sometimes subdivided into gages, prunes, damsons, Mirabelle (is this a kind of damson) plums, etc.

Prunes are the best kinds for drying, as they contain more sugar than other varieties and don’t ferment before they dry.

Japanese Plums (Prunus salicina) – These vigorous trees need a warmer climate (Zones 6-11) than the Europeans and are most widely grown in California. Most varieties require cross-pollination. They include many excellent plums for fresh eating.

American Plums (Prunus Americana) – This native Plums does well in many areas where the others don’t.

Pluots – The reverse of an aprium, these are the crosses between an Apricot and a Plum that resembles a Plum. They can be very good.