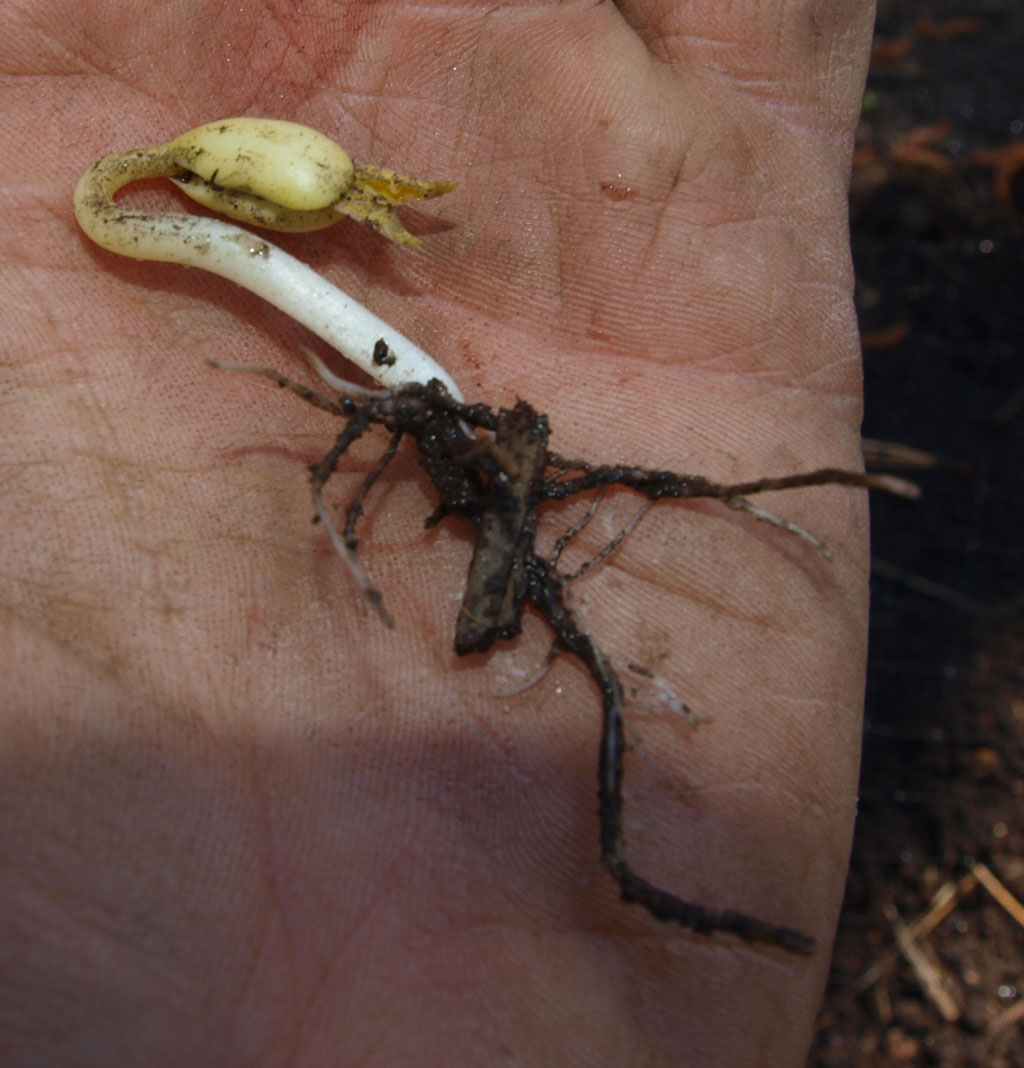 Seeds may be as small as a grain of dust, or as big as a football, but all contain the same parts. The most important of these is the embryo, which is a living, breathing plant reduced to its most basic form. There is also a food source, which keeps the embryo alive while the seed is dormant and powers the germination process until the seedling starts to produce its own food. All of this is wrapped in a thick seed coat, which protects the embryo from adverse conditions until germination.

There is something magical about seeds (Jacks magic beans were nothing special, I have boxes and boxes of magic seeds). I simply love to handle these neat little packages of genetic information and whenever I get seeds, which is often, I simply have to open the packet and handle them. In fact it has become something of a ritual for me. I like to hold a handful of seeds in my hand and think of the previous generations of gardeners who have handled, cherished, planted and saved the variety over the years (sometimes hundreds, or even thousands of years!).

A viable seed contains everything necessary to produce a healthy mature plant, but germination is a very tenuous process and in the wild most seeds don’t manage to achieve it successfully. This is okay because plants often produce hundreds or thousands of seeds, so there wouldn’t be room for them all to grow anyway.

For a seed to germinate successfully the temperature must be high enough, and there must be sufficient moisture and oxygen available (a few seeds also need light). Of course that is simply the start of the growth process. For a seed to establish itself successfully, it must also have a suitable soil to put down roots. This is where most wild seedlings fail, they simply don’t end up in a hospitable enough place.

Seeds require warmth to germinate because chemical reactions occur more rapidly at higher temperatures. The time needed for germination doubles for every 18°F drop in temperature from 90°F. This means that a seed that germinates in 3 days at 80°F, may take a month at 50°F.

All seeds take a long time to germinate at low temperatures and if a seed is planted in soil that is too cold, it will germinate so slowly that nothing seems to happen. If it sits for too long then carbohydrates will begin to leach out of the seed. These will be consumed by bacteria and fungi, which may eventually move on to those in the seed itself and the seed will rot.

The optimal temperature for plant growth is usually about 10°F lower than that for germination (65 – 75°F). This difference is significant because it makes it possible to germinate seeds in the warm greenhouse, when the soil is too cold for direct sowing. Once they have reached a suitable size, the seedlings can be transplanted outside into cooler conditions, where they will still grow satisfactorily

If a living seed has imbibed enough water and has sufficient oxygen, its respiration and other chemical processes speed up and it starts to germinate (ungerminated seeds need only minimal oxygen to stay alive). If the seed is close to the soil surface, this oxygen is easily available from the air in the pore spaces (a rule of thumb states that a seed should be buried at a depth of 3 – 5 times it diameter). If a seed is buried too deeply, there is insufficient oxygen and it will just sit there lying dormant. Weed seeds sometimes sit in the soil depths for years, until they either die, or a gardener disturbs the soil and brings them to the surface, where they can germinate.

If the seed remains buried for too long, if the surface of the soil is sealed (by crusting or algae), or if the soil is waterlogged, then the seed might never get enough oxygen and will eventually die.

A few kinds of seed won’t germinate unless they have been exposed to light, but most aren’t particular. Of course as soon as they are able to photosynthesize they absolutely must have enough light for healthy growth, or they soon start to suffer and eventually die.

A dry seed may contain as little as 10% water. When it gets wet it soaks up water like a sponge and its water content may increase to as much as 70%. This process is known as imbibition and is a purely mechanical process that occurs even in dead seeds. The resulting change in appearance can sometimes fool you into thinking a dead seed is germinating.

The process of germination starts when the moisture absorbed during imbibition causes various enzymes to be activated and the seed wakes up. These enzymes start to convert the store of starch in the seed into glucose which provides the energy necessary for the growth of the embryo. Once the germination process has begun there is no turning back; the seed must have everything it needs to keep going, otherwise it will die.

The embryo uses the energy in the glucose for cell division and  growth, slowly breaking out of the seed coat and growing down to form the radicle (or root) and upward to form the epicotyle (or shoot). The roots form first, as they are needed to supply water and nutrients to the growing plant. In fact a plant won’t (can’t) expend much energy on leaf growth until it has established a good root system.

The germinating plant first sends down roots and puts out its cotyledons or seed leaves (unless it is a dicot, but I’m not even going there). These are followed by the first true leaves, which are tiny versions of the leaves of a mature plant. If a plant gets to this stage, it will start to grow rapidly as it puts on more and more leaves. The bigger it gets the better its chances of survival.

The seed of some annual crops have special characteristics that affect germination. In some members of the Apiaceae (carrot, parsnip, parsley) the seed embryo isn’t fully developed and only matures after the seed has imbibed moisture (this is why those seeds are some of the slowest to germinate). Pepper and  beet seed (actually a capsules containing several seed) contain a germination inhibitor that must be leached out before they can germinate (their germination can be hastened by soaking the seed overnight before planting).

Germination is a complex process, but you don’t have to worry too much about the mechanics of it; the plant has that covered. You just have to make sure it gets all of the things it needs and it will do the rest.

New seed legally has to have a minimum germination percentage and most reputable companies are reliable. I have had my doubts about a few packets of seed, but usually sowing technique is the problem rather than the seed. Seed packets usually have the date when they were packed written on them, so be suspicious of those that don’t.

Seed may eventually become so weak it has a hard time getting out of its own seed coat. I once acquired a large collection of unusual old seeds, averaging 6 or 7 years old which had been stored in a garden shed (some packets had even been wet at some point). A surprising number of these seeds germinated satisfactorily, but quite a few had little vigor (some oregano seedlings sat around in their cotyledons for two months before I lost patience with them!)

The size of a seed also affects its vigor. Large seeds have greater reserves of food than small ones, so live longer, are more vigorous and produce larger seedlings (which commonly mature faster). You may have noticed that some newly germinated seedlings quickly grow much bigger than the rest, well this is usually because they came from the larger seeds. If you have a lot of seed and only need a few plants, I think it makes sense to separate out the biggest ones (I do this with a sieve) and only plant them.

Seed that has been stored for any length of time should be tested for germination capacity before you plant it. In this way you don’t waste time and effort on non-viable seed. You can do this yourself quite easily. Select a small quantity of seeds, a minimum of 10, preferably 20, and lay them on one side of a sheet of absorbent paper (blotting paper, a coffee filter, or a strong paper towel – the kind that don’t fall apart when wet). Moisten the paper (don’t saturate) and then fold one side over the other to cover it. Roll up this little package, put it in a plastic bag or sandwich bag and put it in a warm place (75 – 95°F). Check the seeds every day or two, to keep them moist and look for germination. Note when the first seeds germinate (fast germination indicates high vigor) and how long it takes for the rest. Then count up how many germinate altogether to find the germination percentage. You will then have an idea of how many seeds to sow to obtain the number of plants you need.