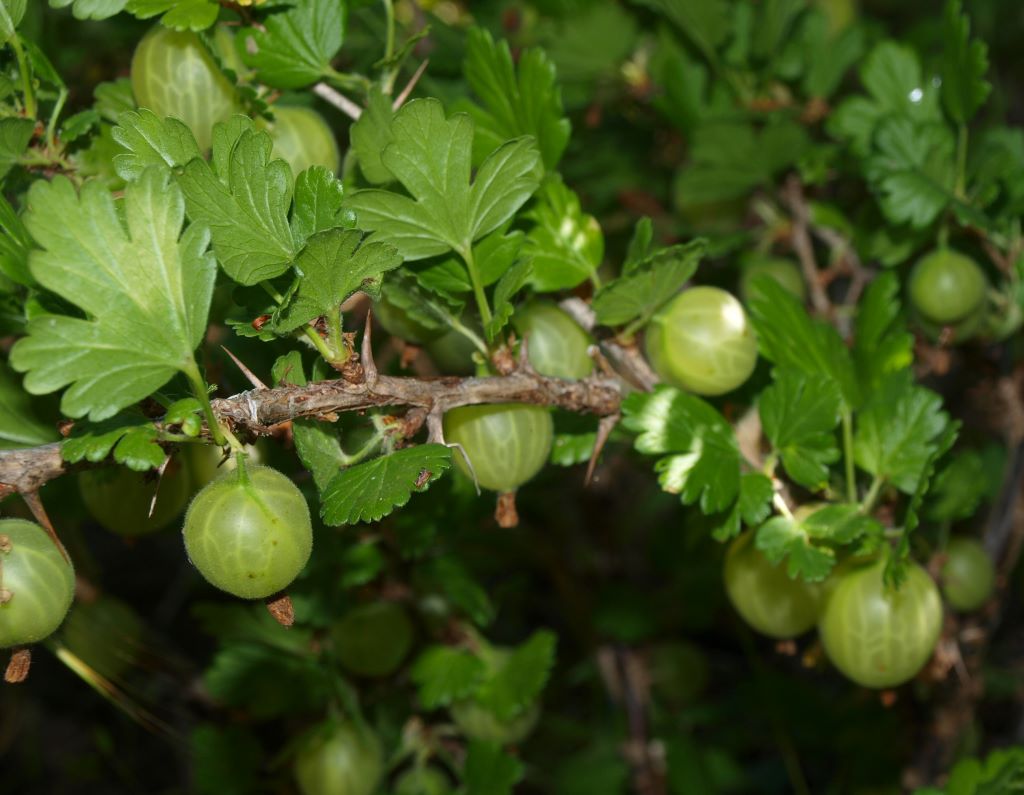 Introduction: Like the other Ribes species, this species is more highly esteemed in Europe than the United States. As a consequence there are not many varieties available in this country. The fruit comes in varied shades of red, yellow or white.

Climate: Gooseberries are most productive when growing in full sun, but they tolerate some shade better than most fruiting plants (like other Ribes species they prefer light shade in hot climates). They are very hardy (to -40°F).

Gooseberries prefer a slightly acid, well drained, medium loam, but do well in most soils, even quite poor ones (so long as they aren’t too wet).

Site: The site should be well protected from wind and not in a frost pocket because they flower quite early. It doesn’t need a warm location however. If your soil isn’t very well drained you might consider planting on a hillside, or on a mound.

Soil preparation: These plants are vigorous perennials and use up a lot of nutrients, so incorporate lots (at least one wheelbarrow every 2 square yards) of compost or aged manure before planting (this is especially important for sandy soils). Remove any perennial weeds at the same time.

Planting: The currants are usually grown from dormant bare root plants and may be planted from late fall to early spring. Make a large hole so you can spread out the roots widely.

Pollination: Gooseberries are self-fertile, but planting two or more varieties can increase yield.

Mulch: Use a 3”mulch of compost to add nutrients, keep the ground moist and suppress weeds.

Fertilizing: Gooseberries like potassium so an occasional side dressing of wood ashes can be good.

Watering: The plants need consistent moisture, especially in warm areas. Irregular watering may cause the ripening fruit to split.

Thinning: This isn’t usually necessary but may be done by competitive gardeners who want to grow large berries.

Weeds: Gooseberries are quite shallow rooted so it’s good to keep the area around them weed free. The best way to do this is to hand pull existing weeds and then lay down a thick mulch. Avoid using a hoe on these shallow rooted plants.

Pruning: Gooseberries bear fruit on spurs of older wood and at the base of last years growth. Pruning is done to encourage a productive framework of branches and an open center bush (this improves air circulation and makes picking easier).It is usually fairly minimal and is largely restricted to removing older wood (anything over 3 years old) and to thinning out overcrowded parts.

Training: Gooseberries are usually grown as open centered bushes on a single short (4”) stem. For a more ornamental effect they can also be grown as standards with a single trunk (3ft).

Gooseberry Sawfly: These little maggots can be a serious pest as they can strip your plants of leaves in a few days. If they exist in your area it’s important to keep an eye out for them, so you catch them before they defoliate the plants, not after.

Birds: Will sometimes damage the buds in winter, in which case they may need to be netted. They will also develop a taste for the ripe fruit if given the opportunity, in which case netting may be necessary.

Landscape uses: Gooseberries are sometimes trained as a standard, with a single stem and a bushy top, so they are more ornamental. They are also thorny enough to be used as a barrier hedge.

Harvest: Fruit may be harvested at two stages. Unripe fruit is harvested while still green and hard and sour for use in pies (it requires a lot of sweetening). Ripe fruit is used when soft and sweet for fresh eating. If you want large fruit you can harvest thin, using the thinnings for cooking and allowing a few fruit to get bigger and ripen fully.

This species has the best flavored fruit, but many cultivars don’t do well in North America.

This species does better in North America but the fruit isn’t as good as the above. Some hybrids between the two are available.