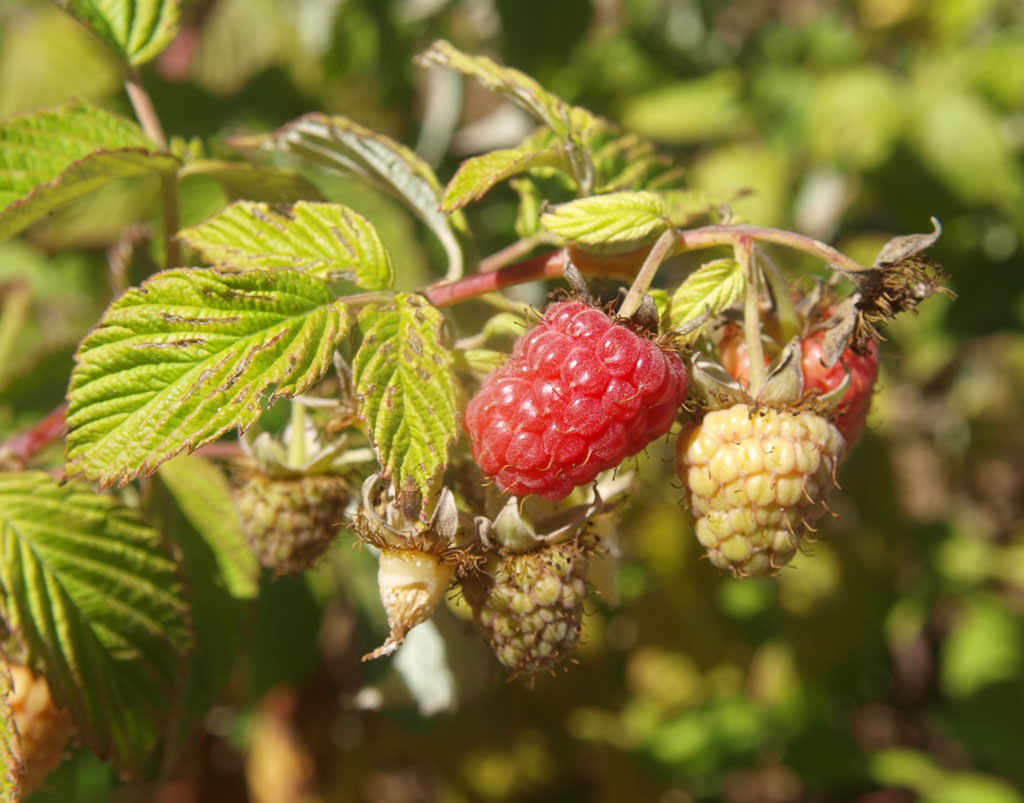 The raspberries are so closely related to the Blackberry that there are hybrids between the two, but there are significant differences. The biggest one is that their flavor is quite different, though it tastes every bit as good. They also have a different growth habit than Blackberries. They don’t root at the tips, but instead spread by means of underground roots and suckers, which can eventually form dense colonies.

Raspberries are an outstanding crop for cool climates, produce over a long period and start to produce the year after planting.

Growth habit: Every year raspberry sends up new suckers, from the base of old canes and on creeping roots. These canes are biennial and spend their first year growing and their second year fruiting. They then die and can be removed.

Climate: Raspberries are very hardy (to -20°F) and can be grown in most parts of the country. It’s said that they don’t like very hot weather, but all three types (red, black and yellow) do fine in my garden (we only get a few really hot hours daily though).

Raspberries prefer a soil that is moisture retentive, slightly acid and well drained, but will grow on almost any soil.

Site; Raspberries grow naturally in forest clearings and can creep around the forest floor to get the most light. This means they will tolerate quite a bit of shade, though they need full sun for best production (6 hours of sun is minimum). If your soil isn’t very well drained you might consider planting on a hillside, or on a mound.

Preparation: As forest dwellers they appreciate soils that are high in organic matter, so amend the planting bed with lots (4”) of compost or aged manure (this is particularly important if the soil is sandy). It is also a good idea to add some fertilizer mix (10lb/100sq ft).

It is important that any plants you obtain be free of viruses. If you buy them from a reputable place this is almost guaranteed, but if someone gives you them this is not so certain.

When: In mild climates raspberry plants can be planted any time they are dormant from late autumn to early spring. In colder climates they are usually planted in spring.

How: The plants should be put in the ground so the crown is the same depth it was in the nursery bed (or 1 inch deeper). The roots should be at least 3” deep. After planting you should cut the cane down to a strong bud about 12 inches up the cane. This will encourage it to send up vigorous new growth and prevent it from flowering in its first year.

Spacing: You can plant your raspberries in rows for easier support and maintenance, spacing them 18” apart, in rows 5-6 ft apart. You can also spot plant them as individuals all around the garden or in a forest garden, so eventually grow into separate colonies.

Support: It may be necessary to support the taller varieties, so they don’t fall over and to ensure they receive good sun and air circulation. Support usually consists of a line of 6ft tall T posts with a series of wires. This can get quite involved with several systems being used.

Mulch: After everything is planted use a 3” mulch of compost to add nutrients, suppress weeds and keep the ground moist. You should add 2-3” of mulch every spring to replace that which has disappeared into the soil.

Maintenance: If you do a lot of training the plants need quite a bit of attention (training is most useful for small gardens). You can also just leave them to grow wild, such as in a forest garden and this of course is a lot less work. The plants actually do better if allowed to grow in this way, as it is how they grow naturally. By slowly moving around there is less chance of disease or soil problems.

Netting: This is often necessary to prevent birds eating most of the fruit. The netting has to be pretty thorough to be effective, as they will try to find a way in through any openings. Sometimes birds are so bad that the plants are grown inside a permanent cage. It’s said that birds don’t go for the yellow fruit as much as the red or black, because it doesn’t look ripe. You can also try scaring the birds with shiny aluminum pie tins, old cd’s or inflatable predator balloons.

Fertilizing: The plants can be very productive and it may be necessary to add extra nutrients to replace those harvested in fruit. The commonest way to do this is with a thick mulch of compost or aged manure. If this isn’t enough you might top dress with a fertilizer mix (10lb of for 100 sq ft of bed) in spring. Wood ashes and kelp meal are also very beneficial.

Watering: Raspberries need a moist soil at all times for best production. Drip irrigation works best as it’s not good to get the leaves or fruit wet It can encourage disease).

Pruning: Plants produce fruit on previous seasons growth and individual canes live for only 2 years. These are usually removed after fruiting. If the plants are growing very well you might also remove any inferior new canes in spring, to leave the strongest to mature (8-10 good canes per plant is a good rule of thumb). You also remove any stray unwanted canes that appear in the paths or other unexpected places.

Pollination: Raspberries are self –fertile.

Thinning: In this case I am not referring to the plants, but rather the overcrowded colonies of plants, which often spread into pathways and invade neighboring plants.. Raspberries spread vegetatively to form dense colonies that benefit from thinning (which consists of removing whole clumps of plants). You can transplant the plants you remove to new sites (or give them away).

Propagation: The simplest way to propagate raspberries is to dig up the creeping roots and established suckers, with as much soil as possible and transplant them. The remaining plants will often benefit from the thinning. They can also be propagated by cuttings or seed.

Mosaic virus: Viruses sometimes become a problem with these long lived perennials. They show themselves in the form of blotched and mottled leaves and stunted canes. Badly infected plants should be removed as soon as you are sure of your diagnosis (make sure it really is a virus and not a nutrient deficiency). This disease is the reason it’s recommended that you start with certified virus free plants, rather than plants from a neighbor (though these can be good too). These should be good for at least 10 years before virus problems become a big problem.

Problems: Wet soil can lead to root damage and death.

Deficiencies: Plants sometimes suffer from phosphorus, potassium or magnesium deficiency. Good compost will cure all of these though.

To check is a berry is ripe just taste it. . The fruit doesn’t all ripen at the same time, so you will have to pick every couple of days in season.

Harvest by picking the fruit (the calyx should stay on the plant) and put it into a shallow container (this should be shallow so the fragile fruit doesn’t get squashed by the weight of fruit on top). Be careful to avoid damaging the growing canes

Storage: The ripe berries are very perishable and only last a few days in the fridge. If you aren’t going to use them promptly it’s best to freeze them.

It is a good idea to plant several different varieties (early, mid, late and everbearing) to get a longer harvest season,

Everbearing raspberries differ in that they produce fruit on the top of current season canes (primocanes) as well as on two year old canes and can give 2 crops a year. The first crop in early summer and a larger one in early fall. These are a useful complement to the other varieties as they help to extend the picking season. These are pruned by simply cutting all canes to the ground in late winter.