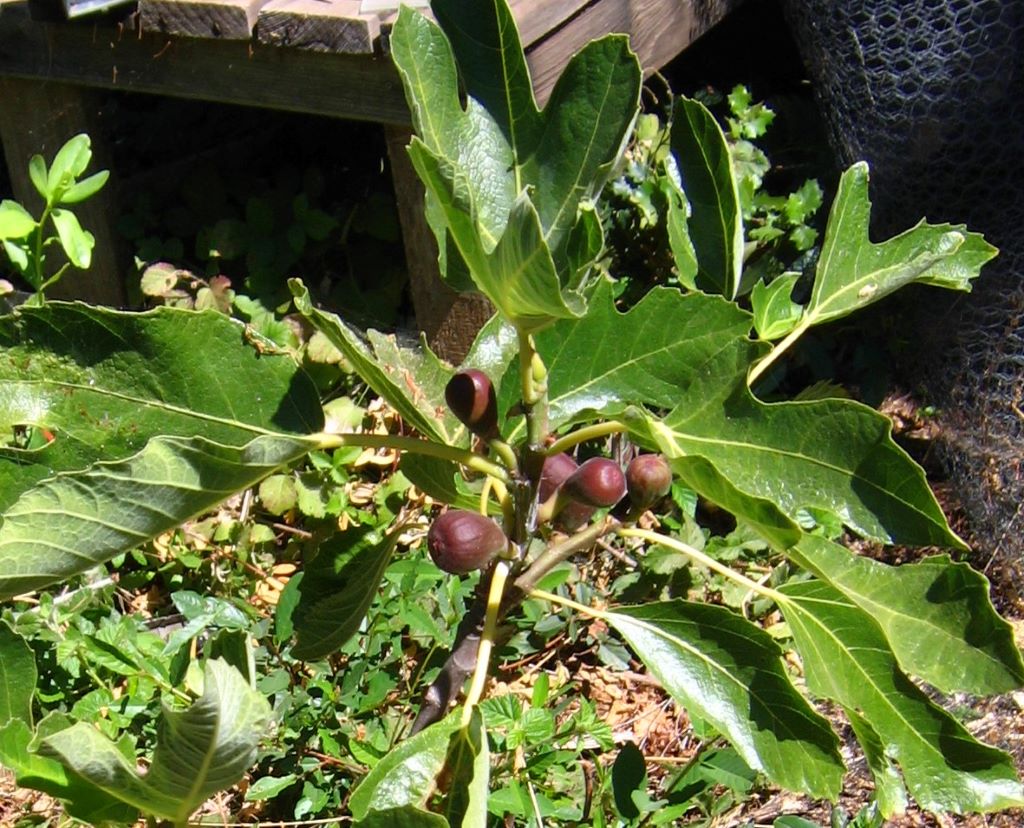 The fig is one of my favorite fruit for ease of growing and the substantial nature of its fruit. I love dried figs.

History: The fig has a very long history of cultivation and is frequently mentioned in the bible.

Nutrition: Dried figs are highly nutritious and are a substantial food source.

Ease of growing: In the right climate the fig is the ideal low work plant for the productive garden. It requires little attention once established, grows in almost any soil (so long as it is well drained), is very drought tolerant and may even produce two crops a year (one in early summer and one in fall).

Climate: Figs are native to hot dry areas and need full sun and plenty of heat for maximum production and quality (there are cultivars that do well in cooler climates though).

Though fairly hardy, they require protection where winters get seriously cold (10° F). If it gets too cold they may be killed back to the roots (these will often re-sprout, but take time to grow and start fruiting again). Fig lovers in colder climates often wrap their trees to help them get through the winter unharmed. In extreme cases they can be grown in containers and taken indoors for the winter.

Figs will grow in any well-drained soil (except saline ones), but tend to fruit best in relatively poor ones. If your soil isn’t very well drained you might consider planting on a hillside, or on a mound.

Site: The biggest requirement of figs is sun; they need a warm sunny site and will not grow well in shade. They are quite happy in a poor, dry soil, so long as it is baked by the sun (in fact they are one of the few crops that will happily grow in such situations).

Heat is needed to ripen the fruit and in cool climates you need to find a warm sheltered microclimate to grow them in (such as a south or west facing wall).

Buying plants: Figs don’t do well when bare rooted, so they are usually sold in pots (though these may be quite small).

Potted plants can be planted any time, though they are most available in early spring. Some people prefer to plant in autumn, while the soil still holds some heat. In mild-winter areas you can plant from late fall to early spring.

How: This is pretty simple because they are sold in pots. Dig a hole for the tree 2‑3 times as wide as the root spread and the same depth as the root (this gives the roots plenty of space). A tree should always be set in the ground at the same depth it was growing in the nursery (this is most easily measured by laying a stick across the hole to get the right height). In poorly drained soils you may have to plant on a mound, to keep the collar of the tree from too much moisture, which could potentially cause it to rot. Throw a couple of shovels of soil (and possibly organic matter) into a mound in the bottom of the hole, then spread out the trees roots evenly over the mound (trim off any damaged roots). Then refill the hole with the soil (you might want to add some rock phosphate, wood ash and lime to the soil). Pack the soil down into the hole firmly (shake the tree slightly to help soil settle as you add it) and then water well (this not only gives water to the plant, but also helps to establish contact between roots and soil).

When you have finished planting the tree should be on a slight mound, so as the soil settles it becomes flat (if it starts out perfectly flat you may end up with a slight depression where water can collect). A final step is a mulch to conserve water and keep down weed competition.

Maintenance: Figs don’t ask for much, they don’t need fertilizing or pruning and can even do without watering in a pinch.

Fertilizing: Don’t normally need fertilizing, but if they are growing less than 6inches a year you might give them some extra nitrogen in late winter.

Watering: Figs are very drought resistant, but are more productive if watered occasionally. Don’t water when the fruits are enlarging, as too much water at this time may cause them to split.

Pruning: Figs are terminal bearing, which means they produce fruit at the end of new growth. They are commonly grown without pruning and are only pruned to control their height or to espalier (it’s much easier to just allow them to grow naturally).

If you really must prune, just make sure you don’t cut off the tiny overwintering figs, or you won’t get a spring crop. Also don’t prune until early spring in case there is any frost damage. You will then cut off any frost damaged parts.

Propagation: Figs are very easy to propagate vegetatively from cuttings. One year a winter storm dropped a large branch on to my young tree, smashing it to pieces, I stuck all of the pieces in the soil and every piece rooted (I ended up with six plants instead of one). As figs grow on their own roots I was actually pretty happy.

Pollination: Most common Fig varieties are self- pollinated, which simplifies things (wild figs have a complex pollination procedure).

Mulch: A mulch of compost or aged manure is good to keep the soil moist, keep down weeds and to add nutrients.

For some reason gophers are particularly fond of fig tree roots and will kill trees of any size they can get their teeth into. Make sure you cage them very carefully.

Birds are quite fond of the fruit and in extreme cases it may be necessary to net the trees.

Nematodes can be a problem in some areas.

Containers: Figs grow well in a container and can be brought inside in severe winter areas. Their drought tolerance is also a help if you forget to water occasionally. However if you want them to produce much fruit it is essential to water regularly (don’t over-water though). The larger the container the larger the plant will grow.

In cool climates figs often have their roots restricted to discourage overly vigorous growth and to encourage fruiting. This is usually done by lining the planting hole with bricks, broken concrete or other rubble.

If is possible to grow figs in zones as cold as 4, though you need to choose the right variety and protect it. In cold climates they are best grown against a south or west facing wall as it gives them extra heat and makes it easier to restrict their roots and protect from frost damage (they don’t mind the dry conditions either). They should be planted about 9” out from the base of the wall.

Landscape uses: An unpruned fig can get quite large as it matures and can become a useful shade tree.

Frost: Mature trees can tolerate temperatures as low as 10-15° F, but younger trees are more tender. If a

tree does get badly hit by frost don’t despair, it will usually sprout again from the roots.

In colder parts of the eastern United States figs are often coaxed through the winter by wrapping them to protect the bearing branches and their embryo fruit. The branches are tied together and then wrapped with burlap.

Most figs naturally produce two crops a year. The first is known as the breba crop and is produced in early summer from overwintering embryo fruit (this first appears on the tips of branches in late summer).The second crop grows from embryos that develop in spring and these mature in fall. In cool climates this second crop often doesn’t have time to mature and so is removed to allow the overwintering embryos to develop.

When figs are fully ripe they become soft and the skin starts to wrinkle. They also wilt at the neck and droop slightly. (milky latex exuding from the stem indicates it isn’t ripe) More on harvesting?

Dried figs: In warm climates any figs left unharvested on the tree will dry out completely and then drop. These can be picked up from the ground (do it promptly so they don’t get infested with insects) and dried further.

The fig can be grown as a single trunk tree up to 30 feet in height, or as a multi stemmed shrub up to 30 ft. wide (bear this in mind when deciding on where to put it). The large leaves make this a very attractive plant and it can be used as a screen or specimen shrub. A row of trees might even be grown as a hedge. It’s best to keep them away from paved areas, as the fresh fruit may drop and make a mess.

Figs may be black, brown or green and vary in hardiness quite a bit. As they are usually propagated from cuttings they grow on their own roots. If you want a dwarf tree, you must do it by pruning Check this?

Figs can be eaten fresh or dried. Fresh figs are succulent and delicious. Dried fruit are particularly useful because they are highly nutritious (removing all of the water concentrates their nutrient value) and can be stored for long periods.