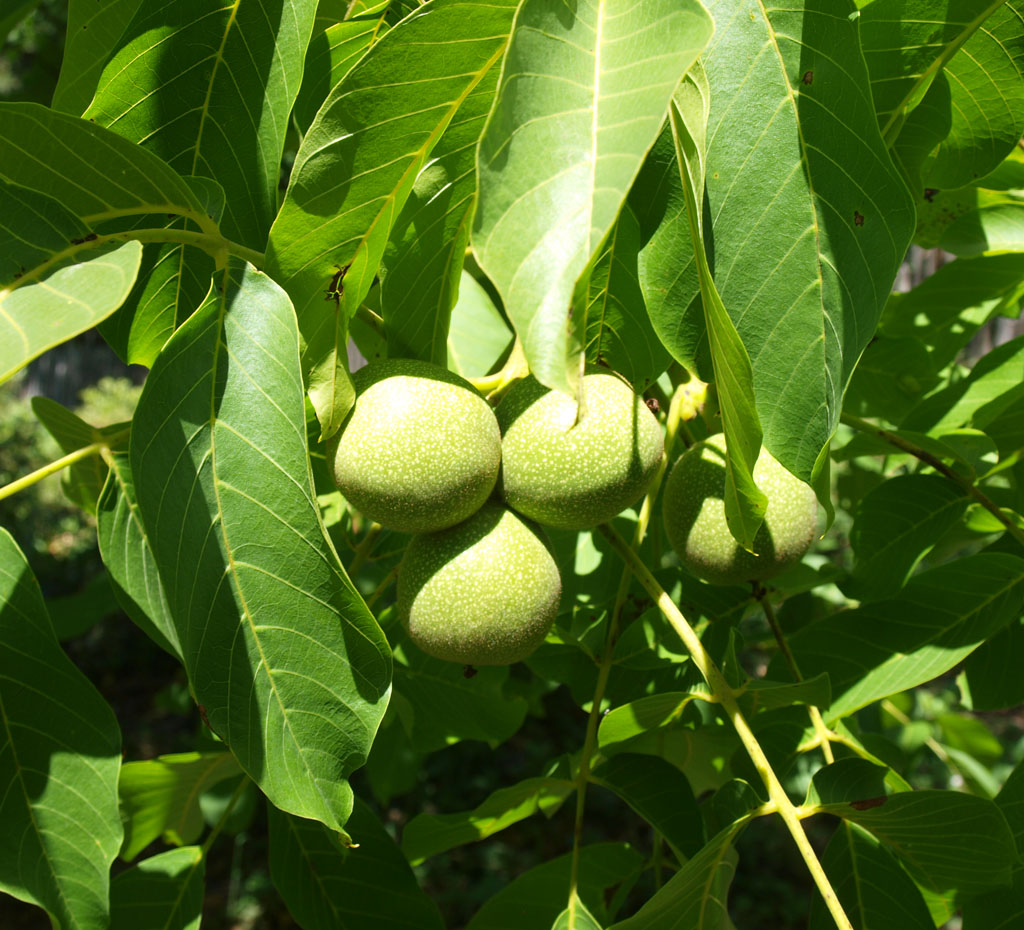 The Walnut is a big impressive forest tree, that not only produces highly nutritious and tasty nuts, but also very valuable wood (this is prized for cabinetmaking and gun stocks).

Nutrients: The nuts are delicious as well as high in protein, fat (especially omega 3 fatty acids) and minerals (notably calcium).

Ease of growing: Walnuts are pretty easy to grow if you give them the right conditions. Those in my garden essentially grow themselves without any input from me.

Climate: Walnuts need full sun for best nut production, though they don’t like very hot climates. Many varieties need a considerable amount of winter chill, though there are low chill varieties that will grow in mild winter areas. Early flowering varieties are potentially vulnerable to late frosts however.

Walnuts do best in a deep, fertile, slightly acid soil that is well drained.

Site: If your soil isn’t very well drained you might consider planting on a hillside, or on a mound.

In mild climates walnuts can be planted at any time from late fall to early spring. In colder climates they are usually planted in spring. As with most other plants a small tree transplants better than a large tree and will do better in the long run.

Fertilizing: Heavily bearing trees should be given additional nitrogen in spring.

Pruning: The trees can be allowed to assume their natural shape, or they may be trained to a central leader. They are terminal bearing, which means they produce fruit at the end of new growth and so they don’t really require pruning.

Propagation: Walnuts are easily grown from seed, but the resulting trees take longer to bear and may be more variable. Improved cultivars are often grafted onto seedlings of native Black Walnut.

Pollination: Walnuts are self fertile and monoecious, which means they produce separate male and female flowers on the same tree. However the flowers may not open at exactly the same time, so bigger yields are obtained when there is more than one tree. They are wind pollinated, so pollinating insects aren’t required.

Mulch: A mulch of compost is useful to keep the ground moist and add nutrients. Keep it away from the trunk though, otherwise there is a danger of crown rot.

Squirrels: These are a big problem in my garden, taking the nuts as soon as they are ripe.

Aphids Be aware that they commonly harbor aphids that secrete honeydew.

Problems: Walnuts are notorious among gardeners for secreting allelopathic substances that inhibit the growth of some neighboring plants (most affected are alfalfa, blueberry, apple, tomato family, bean family and others). They may also be home to aphids that secrete honeydew onto anything beneath them. Bigger list

Harvest: As the nut ripens the green husk splits and falls to the ground with the nut inside. The nuts must be picked up fairly promptly before squirrels do. Remove the husks under foot as you gather the nuts, then rinse (to remove tannin) and dry in the sun.

Storage: The nuts are dried in the shell for long term storage. A dry kernel snaps easily and will keep for months. Don’t shell them before you want to eat them, as they deteriorate once shelled.

Landscape uses: Walnuts make great big stately shade trees, though of course they take a long time to become big enough to be useful for this.

Other uses: Walnut trees are prized for both their edible nuts and their beautiful wood. It used to be said that farmers should plant walnuts as an investment for their grandchildren’s college fund. Unfortunately this isn’t for their nuts, but for their valuable wood. Grow a nice straight Walnut and it could be very valuable one day (though you probably won’t live to see it).

There are quite a few improved cultivars that are later flowering, more precocious (they bear at a younger age), more disease resistant, or have thinner shells (they aren’t necessarily easy to find though).

Persian Walnut can only be grown easily in certain favored areas, fortunately there are other options if you live elsewhere.

Black Walnut (J. nigra) – The nuts are harder to shell and smaller than the Walnut, but have very good flavor. The trees are also more allelopathic.

Butternut (J. cinerea) This species is hardier than Walnut, but the nuts are usually somewhat inferior.

This Asian species is smaller than most other Walnuts and shorter lived. The nuts are similar though.