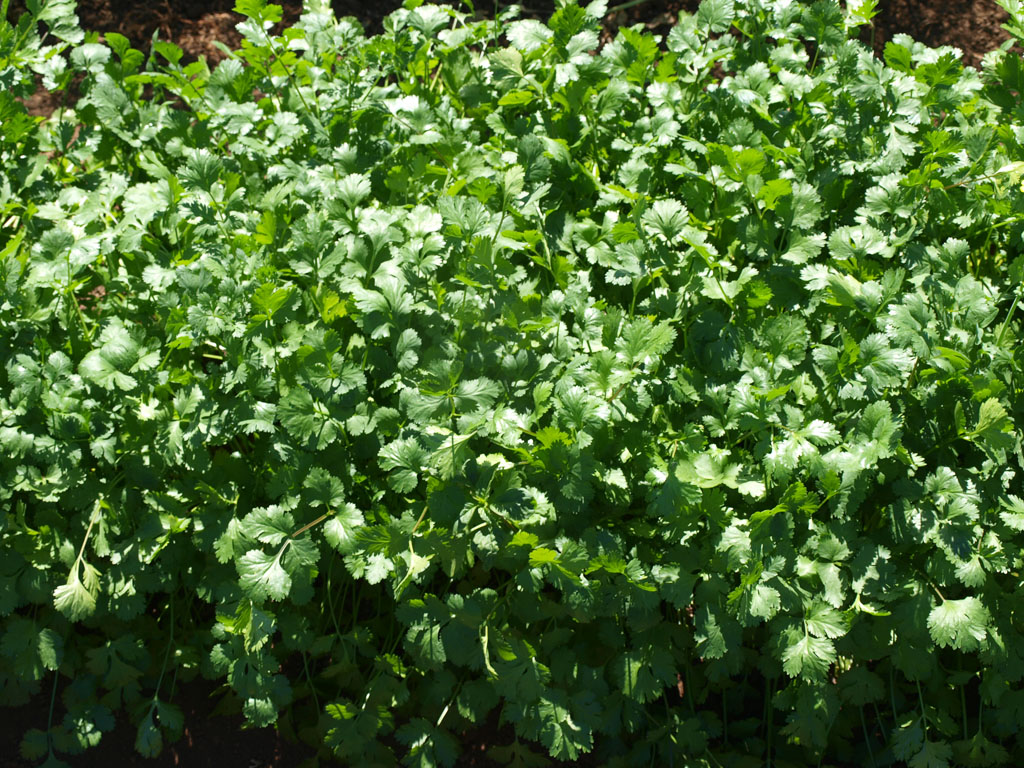 Introduction: This annual provides two quite distinct foods. The leaves (often called by their Spanish name cilantro) have a unique aromatic flavor you either love or hate (I have an old English gardening book that described the foliage as “foul smelling”). I am in a position to appreciate both sides of this argument, as I used to be one of the people who really disliked it. However over the years, through its use in Mexican foods I have grown to love it (I guess if you eat anything for long enough you eventually get to like it).

The large ripe seeds (pods) are known as coriander and have an aromatic orange-like flavor and smell. They are particularly popular in Middle Eastern and Southeast Asian foods.

I really like the immature green seeds also. They have an intriguing flavor that is somewhere between that of the leaf and the ripe seed.

Nutritional value: The leaves are actually a nutritional superfood, containing vitamins A, B1, B2, B3, B5, B6, C, E and K, as well as folate, calcium, copper, iron, magnesium, phosphorus, potassium, manganese and zinc. They also contain a variety of beneficial phytonutrients and antioxidants. We could all benefit from eating more cilantro (even those who don’t enjoy it).

For what its worth cilantro also contains about 104 calories per pound (not that even the most fanatical cilantro lover would ever eat a pound of it).

Climate: Cilantro is a cool weather plant and prefers growing temperatures below 75˚F. It is just about hardy enough to tolerate light frost, but anything more severe will kill it. It is also day length sensitive and bolts quickly during the longer and warmer days of summer. This can be a problem if you are growing it for leaves. It often seems like it finally gets going (producing leaves) and suddenly its gone (bolted.)

Crop value: To its aficionados coriander/cilantro is an indispensable flavoring herb. To the rest of you it is a minor and rather unpleasant (foul smelling?) herb.

Ease of growing: Coriander is fairly easy to grow during cool weather and in my garden it volunteers reliably every spring. It is harder to grow in summer though, as it bolts when exposed to high temperatures and long days.

This is a relatively short lived plant at the best of times and is quite prone to bolting, which can shorten its life even further. In extreme cases it will only grow 4 or 5 leaves and then flower, even if just 6˝ tall.

Cilantro will grow in most soil types, but does best in the average fertile, well-drained, moisture retentive garden soil. If the soil is very poor, it will bolt even more rapidly than usual.

Soil preparation: This isn’t a very demanding plant, but if the soil is poor add a couple of inches of compost or aged manure.

Where: Cilantro prefers full sun when growing in its ideal cool weather. In warmer weather you will often have better luck with partial shade.

When: Cilantro doesn’t like heat and bolts quickly once the weather warms up. In warmer climates it can only be grown in the cool weather of spring or early fall, but in milder areas you may be able to grow it all summer (though bolting may be a problem during the long days of mid-summer). In very mild winter areas it may continue to grow right through the winter.

It is often suggested that you plant cilantro around the last frost date, but you can plant a lot earlier than this. The seed won’t be harmed by cold soil (it often self-sows) and it will germinate whenever it is ready (it knows when to do this better than you do). If you want to try and get it as early as possible you can start it inside, 6 weeks before the last frost. It can also be sown in autumn for an early spring crop.

This annual is easily grown from seed (more easily than most members of the Apiaceae). The familiar round “seed” is actually a capsule and contains a number of seeds.

Direct sowing: Cilantro doesn’t like transplanting, so is usually direct sown. Space the seeds ¼ – ½˝ deep and fairly thickly (1 – 2˝ apart) to start with. You can then harvest thin every other plant as they get bigger, until they reach the desired spacing (or bolt, whichever comes first).

Starting indoors: If you want to start cilantro indoors it’s best to use plug trays, cell packs or soil blocks, to minimize root disturbance. Start indoors 6 weeks before the last frost date and plant out around the last frost date. If hard frost threaten after planting, you could cover them with a frost blanket.

Fall crop: Start 6 – 8 wks before the first fall frost, or whenever the weather cools down sufficiently.

Succession sow: Cilantro is a pretty short lived plant (often only 6 – 8 weeks), but you can ensure a longer supply by making frequent succession sowings every 2 weeks. Do this for as long as you can get usable leaves.

Weeding: Cilantro isn’t very vigorous when young and needs to be kept free of weeds.

Pests and disease: Cilantro is fairly pest and disease free. In fact it actually attracts beneficial insects such as predatory wasps.

Bolting: Cilantro is notorious for its penchant for bolting. This is most often caused by high temperatures combined with long days, but it can also be caused by poor soil, or root disturbance due to careless transplanting.

Saving seed: If left alone this insect pollinated plant will eventually produce seed and will often self-sow. There aren’t many varieties, so you probably don’t have to worry too much about cross-pollination.

The leaves can be gathered as soon as the plants are big enough. If you plant thickly you can harvest thin to extend the harvest. Do this by removing every other plant and using them in the kitchen.

The small white flowers are a nice addition to salads.

Gather the seed heads when the seeds start to turn brown. Put them in a paper bag in a warm place to dry fully and then separate out the large seeds from the chaff.

Storage: You can keep the leaves in a plastic bag in the fridge for a few days. They don’t keep their flavor very well when dried. The best way to store them and retain their fresh taste is to freeze them. You can freeze the leaves whole in a plastic bag, or you can put the chopped leaves in ice cube trays and cover them with water. Once they are frozen you can transfer them to a plastic bag.

The dry seeds will be good for several years.

Containers: Cilantro does pretty well in containers and can even be grown indoors in this way.

Microgreens: If you must have fresh cilantro in the heat of summer salsa season, you could try growing it as microgreens. You can do this outside in a shady bed (maybe use misters to keep it cool) or inside.

For a long time if you wanted to grow this plant there was just one type of generic coriander/cilantro seed (sometimes labelled as Chinese parsley). This has changed in recent years and now quite a few varieties are available, mostly bred with the aim of slowing down bolting (these can help a lot).

Slow bolt aka Santo – As you might guess this variety was bred to be slow to bolt.

Calypso – This one was bred to be even slower to bolt than Slow Bolt (by 3 weeks!)

A very international plant, the seeds and leaves are important in Mexican, Vietnamese, Thai, Indian and other cuisines. I read somewhere that the roots are edible too, though I’m not sure I believe it.

Of course cilantro is an essential ingredient for salsa (see Tomato for a good recipe for this).

The frustrating thing about cilantro is that it doesn’t grow well in hot weather, when you have all those tomatoes, peppers, garlic and onions crying out to be made into salsa. Fortunately there are a number of other similar tasting plants that actually thrive in hot weather (they don’t taste exactly the same, but they are close enough for most purposes). If you crave cilantro during the summer, you will probably be interested in trying these heat loving alternatives. Once I found these I became less concerned about cilantro bolting.

I would say this small tender plant has the closest resemblance to cilantro of the three. It is usually grown from seed and takes up to 21 days to germinate. It is a fairly slow growing plant and takes about 75 days to start producing a worthwhile amount. It is normally started indoors early and planted out after the weather has warmed up.

I have never had a lot of success with culantro in my garden, it just grows too slowly to be of much use. I’m assuming this is because the nights here are too cool. I haven’t really pursued it though, because the other two grow so easily.

This species is commonly used in its native Mexico as a warm weather substitute for cilantro. In restaurants there it is often found in a vase on tables, to be added to food to diners taste. It is now in demand for gourmet restaurants in this country.

Papalo isn’t related to cilantro (it’s a member of the daisy family) but it tastes somewhat similar. It is a vigorous, almost weedy, plant and may eventually grow to 4 feet in height, but

is best harvested when about 12˝ tall. It likes well-drained soil and full sun.

I have found the biggest drawback of using papalo is finding seed to plant; it simply isn’t available in many places. When I finally found some it never germinated. Then I got some at a seed exchange and it germinated very easily. I now consider it a garden essential.

This sub-tropical plant needs moist soil and can even be grown in water gardens. The first time I grew it I never realized this and only gave it water sparingly. It survived but didn’t really thrive until I increased the amount of water they received. In ideal conditions it can be very vigorous and can grow like a weed.

This tender perennial isn’t considered very hardy, but it usually survives the winter in my garden and has been there for at least five years now. It has even survived a cold snap where we had frost every night for two weeks. If you want to grow it in marginal situations you have to look for warm microclimates to put tender it.

My plants haven’t produced seed (to my knowledge), but are easily propagated by division or cuttings.

Vietnamese coriander has become a fixture in my garden because it is a do nothing plant. It just grows and I just harvest. The flavor is slightly different from cilantro, but close enough for most purposes.