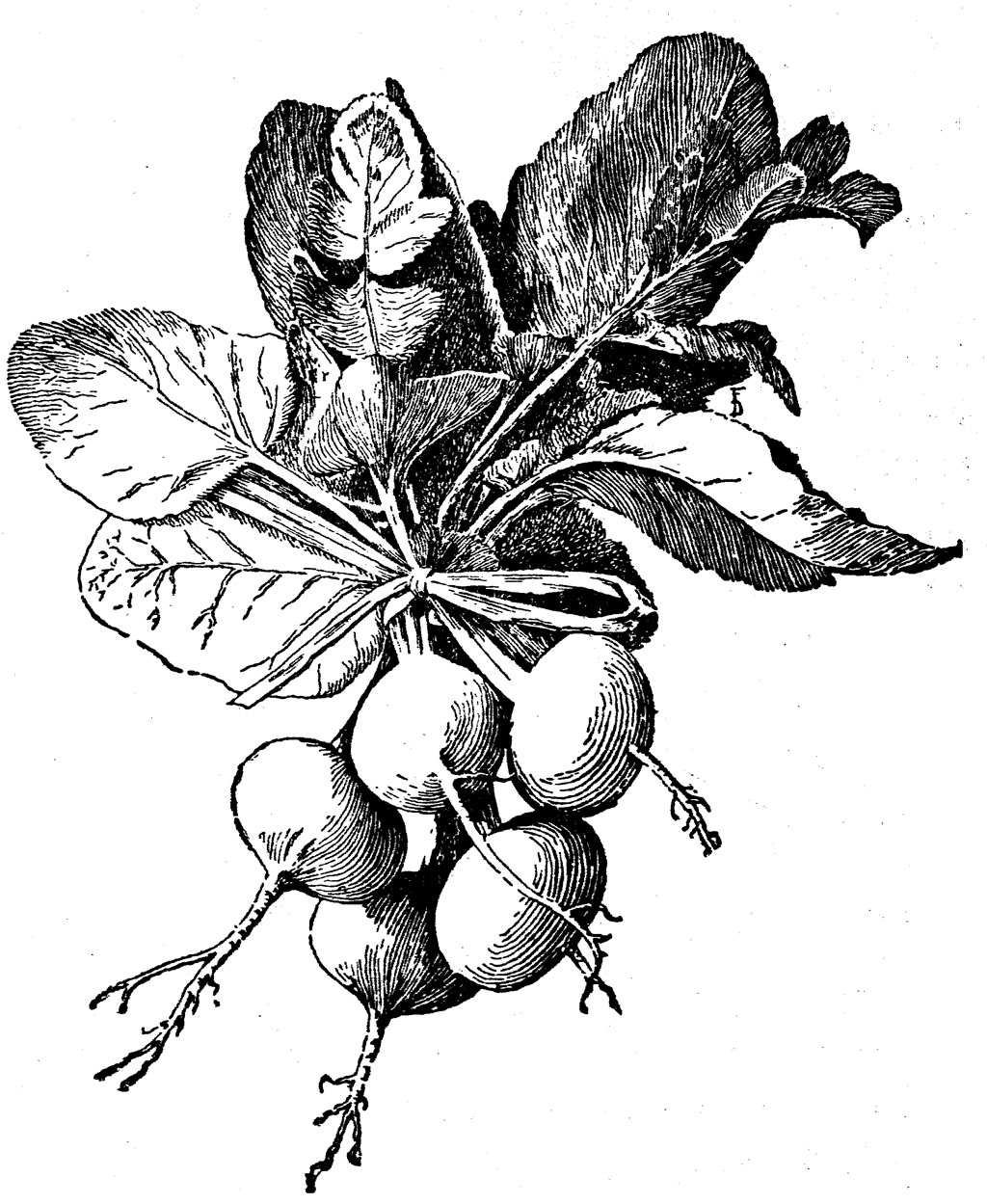 Introduction: The main virtue of radish is that it is quick; some varieties may mature in as little as 3 – 4 weeks. Actually I would say that its only virtue is that it is quick, as I am not a big fan of radishes. They are not very nutritious and are way down near the bottom of my list of useful garden crops.

I actually value radish more for its tasty, spicy seed sprouts than as a root vegetable. The young leaves, flowers and green seedpods are all good in salads.

Climate: Radish is a cool weather crop, growing best at a cool 60°F and with moist conditions. Hot weather causes them to develop a very pungent flavor, similar to the related horseradish.

Ease of growing: The Latin species name means “easily reared”, because this is one of the simplest vegetables to grow. It is often one of the first vegetables a new gardener tries and is commonly recommended for children (though I can’t imagine many children enjoy eating it very much).

Nutritional content: The root is fairly rich in vitamins C and B6, as well as folate, potassium, magnesium, copper, and calcium. It is pretty low in energy, with only about 75 calories per pound.

Radish roots don’t go very deep so the ideal soil is loose and well-drained, such as a sandy loam. They don’t like heavy soil. It should also be slightly acidic.

Soil preparation: Most soils will benefit from 2˝ of organic matter (compost or aged manure), which should be incorporated into the top 6˝ of soil to loosen it (this is particularly important in heavy  clay soil). It’s also a good idea to remove any rocks or debris you come across.

In very poor soil you can dig a special trench and fill it with a mix made from compost, sand and soil.

Like most root crops radishes don’t need a lot of nitrogen (don’t give them fresh manure), but they do like potassium and phosphorus.

Where: In cool weather radishes are grown in full sun. In hot weather they may benefit from light shade during the hottest part of the day.

Because the roots are in the ground for such a short period, they are rarely planted in their own bed space. They are usually interplanted between slower growing crops, such as Brassicas.

When: Radishes grow best with moist soil, cool weather and short days (ideally less than 12 hours long). In most areas these conditions are most easily found in spring and fall (the latter is best).

You can grow radishes in summer too, but temperatures much above 70°F cause them to be very pungent. At this time of year you have to use the right varieties and give them light shade and plenty of water.

Spring: A rule of thumb would be to start planting radishes 2 – 4 weeks before the last frost date. You can plant earlier than this, but if the soil temperature isn’t at least 45°F germination will be slow (at 40°F they may take a month to germinate). You could get them going earlier by warming the soil with black plastic or cloches.

You can plant radishes every 2 weeks until hot weather arrives. Take a break until the hottest days of summer are over and then start your fall planting.

Fall: Radishes often grow better in fall than they do in often spring, as they get to mature in the cool days of autumn.

Winter: In mild climates radishes can often be grown into early winter.

Succession sowing: Radish roots are only in optimum condition for a short time, so it’s best to only plant a few seeds at one time. Succession sow every 10 – 14 days (the shorter time is for warmer weather).

Direct sowing: There is no reason to start radishes indoors, because they germinate easily in cool soil and the plants grow rapidly. Like most roots they don’t transplant well.

The seed is sown directly into the garden ½ – 1½˝ deep and 1˝ apart. A deeper planting may give you slightly larger roots, especially if you give them a slightly wider spacing (1½˝). Bigger seed may also result in larger roots.

Thinning: When the plants have 2 – 3 leaves you should thin to the desired spacing.

Spacing: Space the plants 1˝ – 2˝ – 4˝ apart, depending on the fertility of the soil.

They need to grow rapidly for best quality, which means giving them everything they need.

Thinning: Proper thinning is essential if you are going to grow good radishes. If the plants are crowded they won’t produce useful roots. You can eat the thinnings in salads.

Weeds: These small plants don’t compete with weeds very well, so should be hand weeded regularly. Don’t use a hoe too near the plants as their shoulders are easily damaged.

Watering: Radishes must have a steady supply of water, so keep the soil evenly moist at all times (in dry weather this often requires watering every other day.)

Too little water can result in woodiness and excessive pungency (often such roots are also pithy and have marked growth rings). Too much water may encourage top growth at the expense of the roots. Irregular watering can cause them to crack.

Mulch: This keeps the soil cool, which is important in warm weather. It also retains moisture and keeps down weeds. Generally they aren’t in the ground for long enough for this to be worthwhile though.

Though radishes are one of the easiest crops to grow, beginners often have problems.

Pests and diseases: Radishes are susceptible to the usual host of Brassica pests. Flea beetles will commonly eat small holes in the leaves, but this isn’t usually a major problem. You can protect your plants against many pests by using floating row cover.

Cabbage root maggot: This is the big pest of the radish and is most problematical in spring and late summer. See Cabbage for ways to deal with it.

Radishes are sometimes planted as a trap crop, to lure the little worms away from more valuable Brassicas.

No root: If a radish doesn’t produce a swollen root, it is usually because the growing conditions weren’t good enough. It simply wasn’t producing enough food to have a surplus to store in the root and make it swell. This most often occurs because they weren’t thinned properly, resulting in competition from neighboring radishes (or weeds). It may also be the result of low light levels, too high growing temperature or insufficient water or nutrients.

Excessive pungency: High temperatures (above 70°F) or dry soil may cause the root to be excessively hot. This may also occur when the roots get past their prime.

Woodiness: Insufficient water, or high temperatures (above 70°F) can also cause the roots to be woody or pithy.

Bolting: Radish is an annual and will bolt when it has built up enough food reserves to produce seed. Crowding, poor soil, lack of water and other types of stress may hasten bolting, as may the long days of summer (another reason they are easier to grow in fall).

When: The rapid growth of radishes can be a problem in that the roots are only at their peak for a short time and soon get over-mature. It is important to harvest as soon as they are ready. They will actually age more slowly in the fridge than they will in the ground.

Check to see if a root is ready for harvest with a little careful digging. They are generally best when still small (under 1˝ diameter), as they often get woody or pithy as they enlarge.

If a root gets past its prime, you can just let it flower and go to seed. You can then eat the flowers and unripe seed pods, or you can gather the seed for planting or sprouting.

How: Uproot the plants by hand and cut off the tops to prevent them taking moisture from the root.

Storage: The roots will keep for several weeks in a plastic bag in the fridge.

Seed saving: Radishes are insect pollinated and will cross with any other variety, or with wild radishes (the latter is so common around here that it would be hard to isolate them by the required ½ mile). However if you have a clump flowering together they are going to be mostly pollinated by each other. If you really want to do it right they should probably be isolated by caging,

I mostly use the seed I collect for sprouting, rather than growing more roots, so I’m not that motivated to keep them pure. I just allow the pods to ripen and gather the seed.

Pod radishes: These are grown for their enlarged seedpods rather than their roots. These are fleshy and pungent and are a nice addition to salads. I actually rate them more highly than the roots.

Containers: Radishes can be grown in 6˝ deep pots. They will need frequent watering if they are to produce edible roots.

Indoors: Radishes have been grown indoors in a container in winter, You would have to be a radish addict to bother with them though.

Trap crop: These easily grown plants are commonly planted as trap crops to lure Brassica pests away from more valuable plants. If you simply sow a few more seeds than you need, your regular radish crop could perform this function too.

Sprouting: Any excess seed from your radishes can be sprouted to provide one of the best salad sprouts. See Sprouting seeds.

Cherry Belle – A favorite, as it resists turning pithy. (22 days)

French Breakfast – More tolerant of heat than most.

The roots are generally used raw in salads and sandwiches. They can also be cooked in soups or pickled. In Germany slices of radish are traditionally eaten with salt in beer halls and there is even a variety names after this practice – Munchen bier.

The tender young leaves can also be eaten, either raw in salads or cooked as a potherb.

The immature seedpods are good in salads and can also be pickled.

This is grown for its long edible seed pods (which do somewhat resemble a rats tail) and doesn’t produce an edible root. These can be planted a couple of weeks before the last frost. It is much more tolerant of hot weather.