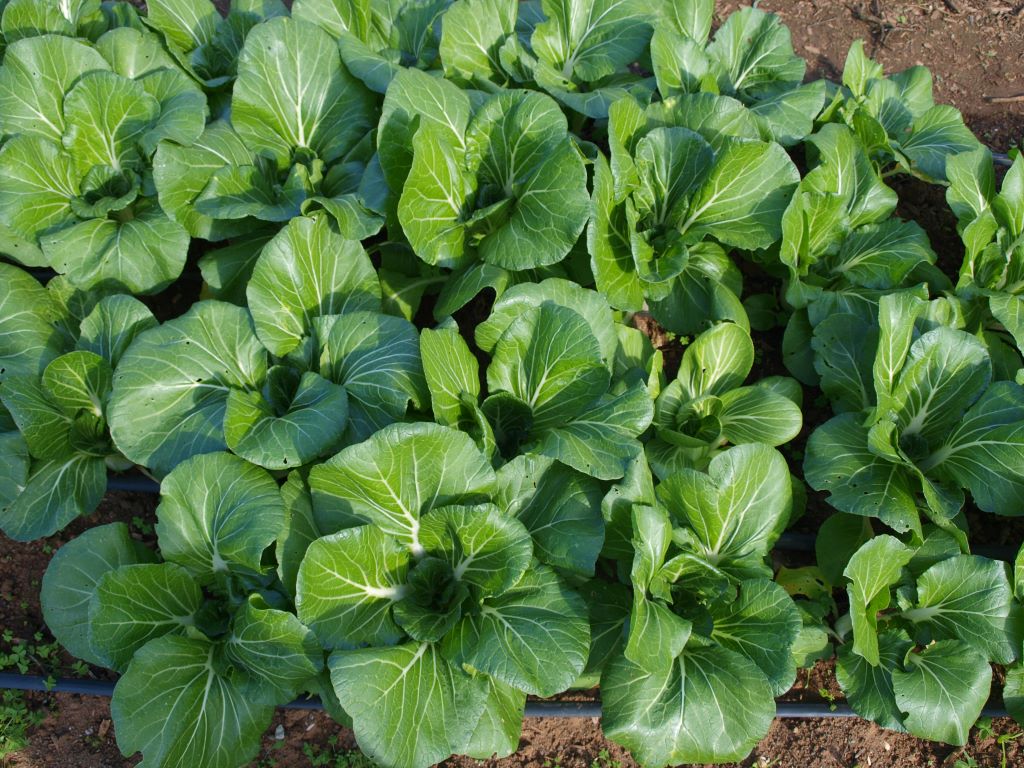 This ancient Chinese crop has been grown for at least 2000 years and probably a lot longer. Since that time its use has spread throughout most of temperate southeast Asia and to all parts of the world where Chinese people have settled.

Though closely related to Chinese cabbage (it is the same species) it has a very different growth habit. Instead of producing a dense head of leaves, it produces leaves with characteristic broad white or green midribs. These are responsible for it sometimes being called celery cabbage. Bok choy translates as white vegetable, which is also a reference to the stem..

Bok choy is easier to grow than the heading Chinese cabbages and deserves to be more widely used in this country. It is particularly useful for cool weather growing and can be an important part of the cool season vegetable garden.

This crop is somewhat temperamental and reacts in different ways to different circumstances. It is a good idea to experiment with varieties and planting times until you find a combination that works. Try planting it at regular intervals and record how it does in your journal.

Pak choy is cultivated in much the same way as Chinese cabbage and like that plant it grows best as a fall or over-wintering crop. It isn’t as difficult as that plant, but it is still prone to bolting in warm weather (even though it is supposedly a biennial). I have had plants bolt within a month of planting.

Nutritional content This crop is exceptionally rich in beta-carotene (much more than cabbage), as well as vitamin C, K and several B’s, calcium and iron. It also contains valuable antioxidants, including lutein, zeaxanthin, sulforaphane and isothiocyanates which give it powerful anti-cancer properties. As an energy source it contains about 60 calories per pound.

Climate: Pak choy is generally a cool season crop, doing best at 60 to 65˚F. There are some varieties that are adapted to warm weather growing however.

This hungry crop grows rapidly and doesn’t have a very vigorous root system, so needs rich, moist, well-drained soil with lots of nitrogen.

Soil preparation: Incorporate 2˝ of compost or aged manure into the top 6˝ of soil before planting. If the soil is poor then throw in some organic fertilizer mix too. If it is acidic add lime to raise the pH.

Where: In cool weather put it in a sunny location where it will be sheltered from cold winds. In warm weather you might try growing it in light shade. Don’t plant it where any other Brassicas were grown in the last three years.

When: Pak choy grows best in cool weather, so the best time to plant it depends upon where you live. In places with cool summers and mild winters it can be grown almost year round (though the long days of midsummer may cause it to bolt quickly). In hot climates it can only be grown in spring and fall (and maybe winter).

Spring: This plant can be made to work as a spring crop by starting it indoors and using an early maturing and bolt resistant variety.

Sow the seed 2 – 4 weeks before the last spring frost and plant out 2 weeks after it. It is hardy enough to be planted earlier than this (it can survive temperatures as low as 20˚F), but there is a danger that it will bolt as soon as the weather warms up.

Fall: Bok choy does best as a fall crop, because it is less likely to bolt in the cooler and shorter days. It is started in late summer, when the weather starts to cool down (6 – 8 weeks before the first fall frost).

Succession sowing: This is a short lived crop, so succession sowing every couple of weeks is important. In most areas you should be able to get several harvests in a season.

Indoors: Bok choy can be started indoors and transplanted. It is usually grown in cell packs or soil blocks to minimize root disturbance. If the weather turns cold again after planting out, protect the young plants with cloches, until temperatures are above 50˚F.

Outdoors: Bok choy seed germinates easily and the plants grow rapidly, so it is usually direct sown. Simply sow the seeds ½˝ deep and about 3 – 4˝ apart. Start thinning when the plants have 4 or 5 leaves. As plants get bigger you can harvest thin, to leave the plants at their final spacing. Use the thinnings in the kitchen.

Spacing: This depends upon the variety and type of crop required. It is commonly planted in offset rows across the bed 6 – 8˝ apart each way (these can be thinned later if you need a wider spacing). Plants may grow anywhere from 4 – 24˝ tall, depending upon the variety and growing conditions.

Intercropping: Pak choy is so fast growing it is frequently used as an intercrop between slower growing crops. In summer it is sometimes grown in the shade underneath tall crops such as corn.

Bolting: Pak choy (and most other Asian Brassicas) are fast growing and prone to bolting. Sometimes they may bolt within a few weeks of planting, which can be frustrating.

Bolting may be caused by a variety of factors, take your choice from: too hot, tool cold, too dry, long day length, low soil fertility, exposure to cold when seedlings (this may be the most important factor), extreme weather, any interruption in growth (such as careless transplanting) or simply because you look at it the wrong way.

If a plant threatens to bolt prematurely, you can simply harvest what there is, or you can let it bolt and harvest the flower shoots for use like choy sum (see below). You could also let them produce seed and gather it for sprouting or replanting (if it is open pollinated and not a hybrid).

This tendency to bolt varies according to cultivar, some are much more prone to it than others. It is the reason these crops are most often grown as a fall or winter crop.

Weeds: Keep down weeds while the plants are young, as they don’t compete for nutrients very well.

Feeding: If your soil isn’t very fertile you should give the plants a feed of compost tea or liquid kelp 2 – 3 weeks after planting and again 3 weeks later.

Watering: This is a fairly shallow rooted crop and it must have evenly moist soil. If the plant gets water stressed it will usually react by bolting. Regular watering is particularly important in summer, as you want to delay the inevitable bolting as long as possible.

Mulch: Bok choy benefits from mulch, as it helps to keep down weeds, conserves moisture and keeps the plants cleaner. Give it 2 – 3˝ of organic matter such as compost or aged manure.

Pests: Most of the pests and diseases that attack cabbages may also attack these plants (slugs, snails, aphids, caterpillars, cabbage root fly, cutworms, flea beetles, cucumber beetles. See Cabbage for more on these.

Diseases: Clubroot, bacterial rot and damping off may all affect it.

When: A nice thing about bok choy is that it can be harvested at almost any stage of growth.

When the plants are mature you can pick either individual leaves or cut whole plants. When plants are a few inches high you can cut the whole rosette of 5 – 6 leaves for use as baby greens. You can also use them as even smaller micro-greens (these are often grown under cover during the winter). How tasty they are will depend upon the variety and the growing conditions.

How: You can harvest individual leaves, but they tend to be quite small so it is more common to harvest whole plants. Simply uproot  every other plant in a bed, leaving the rest to grow bigger.

You can also harvest by cutting off the plants a couple of inches above soil level. With luck the remaining plant will re-grow and give you another crop. This can be especially useful in winter when it may be hard to get another crop established.

Flower stem: When the plant inevitably bolts and sends up a flower stalk you can eat it. Just harvest it before the flower buds open and use it like broccoli . Of course this is only worthwhile if the plants have reached a reasonable size. See Choy sum below for more on using these.

Storage: The plants can be stored for a few days in a plastic bag in the fridge. In China the leaves are often dried for use in soups.

Seed saving: This crop is cross-pollinated by insects and will cross with any other B. rapa crop (which includes turnip and broccoli raab) as well as other Chinese cabbage varieties. You should save the seed from at least six plants to ensure some genetic variability.

These plants can produce a lot of seed which gives you plenty for growing cut and come again baby greens or micro-greens, making mustard, or for sprouting like alfalfa.

Multiple stages of use: A single planting can be eaten at various stages of growth. To do this it is sown quite densely (1˝ apart) and then gradually harvest thinned.

The first thinning takes place after all the seeds have germinated and evens out the plants. These seedlings are the first harvest and can be used in salads or cooked.

Thin the plants again (2 – 3˝ apart) when they only have a couple of leaves and no thickened midrib and are 3 – 4˝ tall. These are good raw in salads or can be cooked as baby greens. They are so good at this stage, that the plants are sometimes grown purely as a cut and come again crop.

When the larger seedlings reach 5 – 6˝ tall and have 5 or 6 leaves, thin them yet again by cutting the whole plants. This time to their final spacing of 4 – 8˝. These larger thinnings are also good to eat.

The next harvest consists of the mature, fully grown plants.

If any plants bolt prematurely you can eat the flower stems like broccoli (before the flowers open). If the flowers have already opened, you can let them produce seed (if open pollinated, rather than F1 hybrids) and start the cycle all over again.

Containers: Pak choy is a good crop for growing in containers, either for full grown plants, baby greens or microgreens.

Poly tunnels: Bok choy is one of the best crops for winter growing in poly tunnels or cold frames. They are able to tolerate wider daily temperature swings (warm days and cold nights) than most other crops. They also do well with less light (it even makes the leaves more tender) and there are fewer pests at this time.

There are quite a few varieties available and they vary considerably in their tolerance for heat and cold and when they grow best. Success often depends upon planting the right variety for the circumstances, so it pays to experiment a little. Some varieties are intended for planting at certain times (warm weather, cold weather) and don’t do well if planted at another time.

The bok choys are usually divided into three groups; white stem, green stem and baby bok choy. The babies could also go in the green or white stem categories too.

These varieties are smaller, more tender and contain less stalk (as I imagine a baby would) so are perhaps more useful in the kitchen. They include:

In Asia these vegetables are usually cooked by steaming, stir frying or adding to soups, etc. Some of the milder and more tender ones can be added to salads.

In Korea bok choy is a staple for making fermented kimchee.