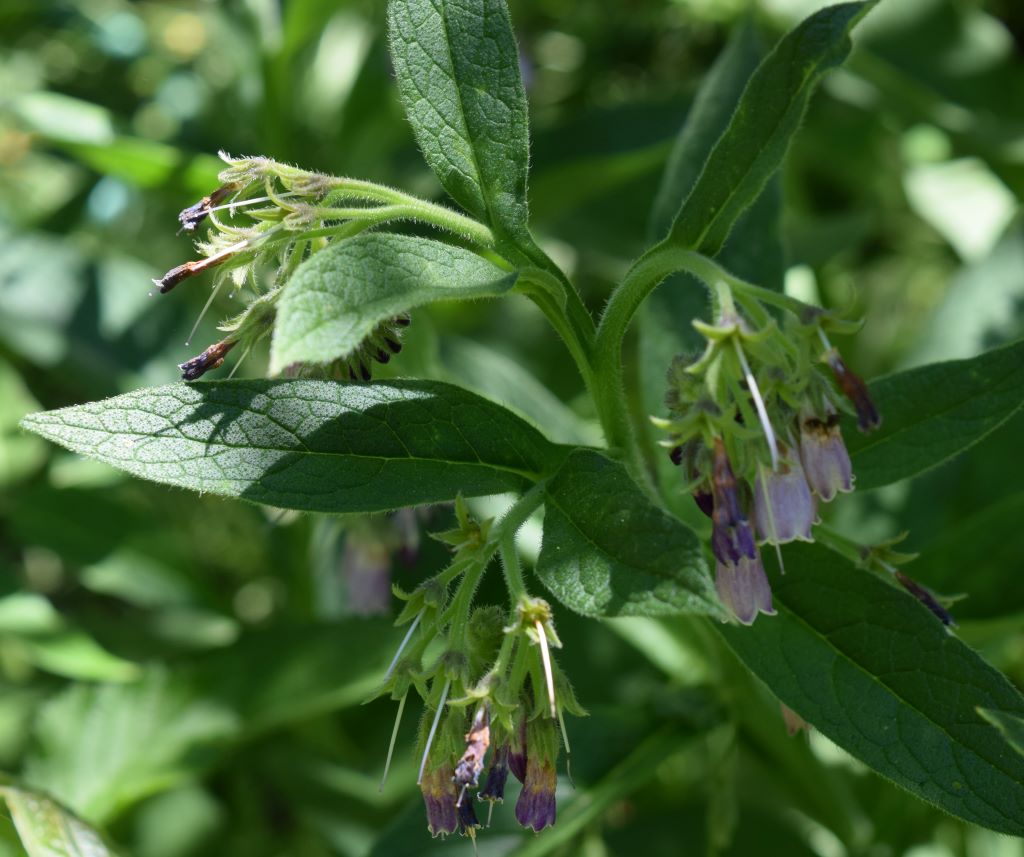 This persistent European plant can be found in gardens across the North America and often occurs as an escape from  cultivation. This is fortunate because Comfrey is something of a wonder plant.

Caution: Comfrey has been eaten as a potherb in the past, but there is some controversy as to whether it is really safe to eat. It has been found that the leaves and roots contain toxic pyrrolidizine alkaloids. Some plants that contain these substances are dangerously toxic and often poison domestic livestock.

There are no records of Comfrey causing poisoning in humans or animals. On the contrary it is generally considered to be a very beneficial forage plant and has even been fed to racehorses and show animals, to bring them into peak condition. Proponents of the plant claim that the evidence of toxicity is almost purely from a laboratory, when extracts were injected and that it is perfectly safe to eat in moderation.

I will remain on the fence on the question of toxicity. Even though I talk about eating Comfrey, this is not a recommendation for you to do so.

Nutrients: Comfrey is one of the world‟s most efficient producers of plant protein, yielding up to six times as much per acre as Soybean. It is one of the few vegetable sources of vitamin B12 and is also rich in vitamins A and C and the minerals calcium, phosphorus and potassium.

Green drink: I most often use Comfrey leaves in a green blender drink, which is a form of smoothie. I have written a separate post about this.

Greens: The leaves are too rough to be good raw, but make a fair potherb and were once popular fried in tempura batter. Young leaves are best, but older ones can be used. The dried leaves have been ground to powder, for use as a food supplement.

Drinks: The dried leaves have been used for tea, but are better mixed with other herbs, rather than used alone.

Medicine: The herbalists of old considered Comfrey a panacea, of help for almost everything and it is still considered a very special medicinal plant. The growing parts contain a substance called allantoin that stimulates cell growth. This makes Comfrey one of the best plants to hasten the healing of burns, wounds, ulcers, insect bites, sprains, bruises and infected sores. It is also used to stop bleeding. The leaves or roots can be used as a poultice, or mixed with oil and beeswax to make a wonderful salve. Be sure the plant parts are perfectly clean, as dirty material on a wound could lead to infections such as tetanus.

I have read that the mashed root was once used as a poultice for broken bones, and that it will set hard like a cast. I don‟t know how it was used. The dried powdered root was eaten to hasten the healing of broken bones.

Animal food: Comfrey has been wiely cultivated for use as animal feed and then returned to the land in the form of manure.

Cosmetics: The juice of the plant is said to be beneficial for the hair and skin.

Fuel: Comfrey may produce up to 50 tons of green matter per acre in a season, so it has been suggested as a possible source of vegetation for methane production. This would also give nitrogen rich fertilizer as a by-product.

Cultivation: Comfrey is very easy to propagate vegetatively by means of root cuttings. They grow whatever you do. You could start with a single root cutting and within two or three years you would have as much Comfrey as you could possibly use. Seed is not used for propagation because the plants don’t normally produce viable seed. The plants are said to prefer rich moist soil, though I have seen them growing on dry mine spoil heaps that couldn’t really be called soil at all. They will grow in part shade, but do much better in full sun. Established plants are rarely bothered by pests or disease (except for Comfrey Rust in some areas).

Horticultural uses: The plants are quite attractive and several species have been used as ornamentals. A number of superior cultivars exist, but they are hard to obtain. Fortunately even wild forms are very productive.

Eradication: One problem with Comfrey is that it is very persistent and can be hard to eradicate once established. It doesn’t spread aggressively, but is easily chopped up and spread around while digging. If it becomes a pest, it can be eliminated by solarization, or a mulch of cardboard, black plastic or carpet. You might also try repeated cutting to exhaust the roots, but you will probably get exhausted before the plant does.

Fertilizer: Of all its many uses, Comfrey is perhaps most valuable as a fertilizer and soil builder (this is certainly its safest use). Its vigorous root system breaks up compacted soil and mines the subsoil for nutrients. Poor soils can be improved by planting Comfrey on them (perhaps with clover or other nitrogen fixing herbs).

The high nitrogen content of the leaves makes them an excellent green manure and compost material. They can also be used as the nitrogen component of compost piles. For maximum production the leaves should be cut regularly.

An excellent way to use Comfrey as fertilizer is to make a liquid foliar feed. Just fill a bucket with as many leaves as it will hold, top it up with water, cover and leave to ferment for 2 – 3 days (it gets very smelly). Then strain out the remaining fibers, dilute with an equal amount of water and apply with a watering can.

S. uplandicum   These species may also be found as escapes and are used in the same ways. The last species is the most common and I have read that it contains less of the toxic alkaloids, but I can’t vouch for this.