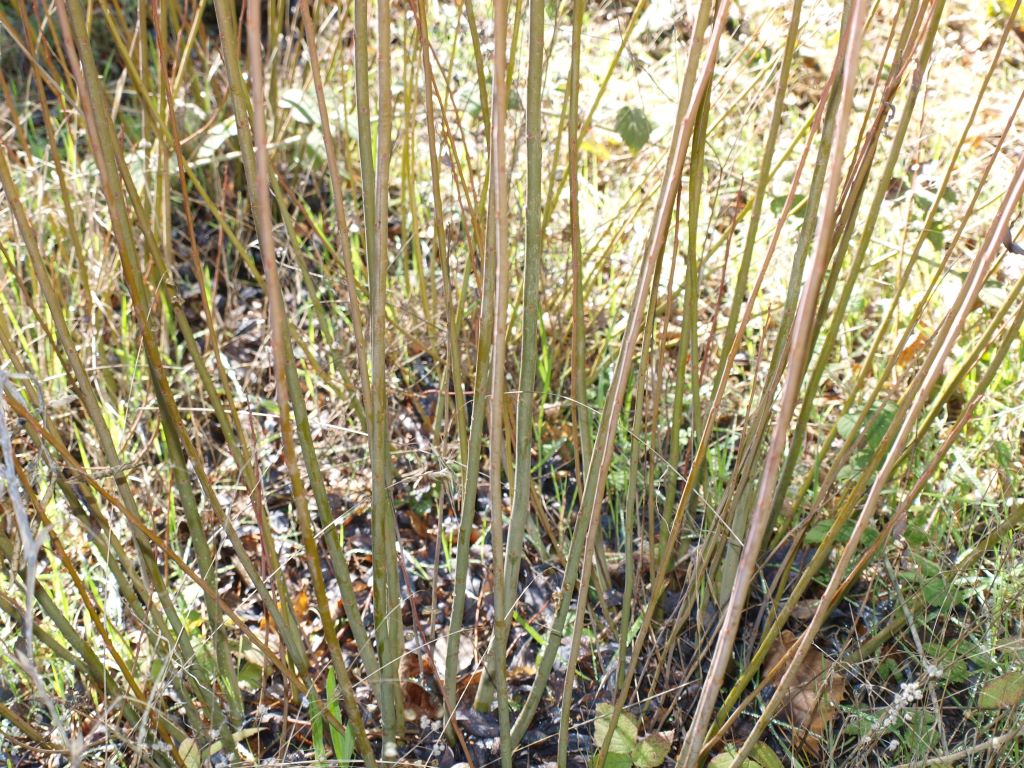 Several species of Willow were once important crops for making baskets and were widely cultivated in Europe. They prefer wet soils near water and are some of the most reliable indicators of wet ground. They are mostly pioneer species, fast growing, short lived, needing full sun to thrive (they are intolerant of shade) and reproducing readily by seed and vegetative means. They are among the first trees to get established on marshlands and help to dry them out for other plants.

Famine food: Most Willows aren’t really edible, though they have been used as survival food. The young catkins, leaf shoots and inner bark, have all been eaten raw, or cooked for 10 minutes, but they aren’t very good.

Medicine: The plant has been used externally as an antiseptic wash or poultice for wounds.

Willow and aspirin: Willow bark tea was once an important medicine. It is a diaphoretic and reduces fevers by increasing the flow of blood to the skin and causing sweating. It also kills pain and reduces muscle and joint inflammation, such as is experienced in arthritis. It is now known that the bark contains salicylic acid, which is a close chemical relative of aspirin. Aspirin was actually developed as a gentler substitute for willow bark.

Willow bark tea is usually made from the bark of 2 to 5 year old twigs. Steep two teaspoons of bark, or a quarter cup of chopped twigs, in a cup of water for ten minutes. A cup of tea is equal to two or three aspirins. It tastes pretty awful, though honey and milk may be added to reduce its astringency and make it more palatable. It may also upset your stomach, so you probably won’t use it unless you really need it.

Fuel: Willow wood contains a lot of water, which makes it poor firewood. It gives about 13 million Btu per cord on average (about half the fuel value of Oak). However the wood has long been prized for making charcoal for drawing, gunpowder and medicinal purposes.

Some strains of Willow grow twice as fast as others of the same species and have been used experimentally in energy plantations. They are coppiced on a short rotation of 2 to 4 years and converted to chips for use as fuel. An acre of these plants might yield the energy equivalent of about 25 barrels of oil annually. If fertilized with sewage sludge (which is generally unsuitable for food crops), these could be a useful source of energy.

Chemicals: Though the Willows are poor firewood, they have potential as a source of fuel and chemicals, extracted by wood pyrolysis (distillation). This yields methanol, methane, wood oil, tar, pitch, creosote, charcoal, acetic acid and other valuable chemicals.

Wood: Willow wood is light and weak, but very shock resistant and has been used for sports equipment (English cricket bats are made of Willow), artificial limbs and polo balls. It is durable if kept wet, so is sometimes used for pilings and revetments. In the middle ages the long, supple shoots were widely used to build scaffolding for the construction of large buildings such as cathedrals. It was lashed or woven together, much as bamboo is still used in Asia.

Tanning: Willow bark was used to tan some of the very finest leathers.

Down: The downy seed has been used like that of Cattail (Typha), for stuffing clothing and pillows.

Basket weaving: Basket weavers prize the slender, supple shoots as perhaps the best of all materials for their craft. The shoots are usually cut in winter, or early spring before the leaves appear, but for rough work they were sometimes harvested in summer. The cut stems were stored upright, with their butt ends in water. For fine basketwork the bark must be peeled off, which is most easily done in spring, when the sap is rising. If gathered at other times it is necessary to boil the shoots to loosen the skin. They are peeled by pulling through a V shaped notch in a board and are then dried for storage. They are soaked in water overnight prior to use, to make them supple.

Brooms: These were once made out of the finer twigs, in much the same way as Birch (See Betula).

Animal food: These species are an important source of food for wildlife, including deer, beaver, moose, hares, ptarmigan and many insects. Goats and cattle will eat the foliage quite enthusiastically and it can be dried for winter use. The pollen is a source of food for bees early in the year.

Muka: The name comes from Latvia, where this idea was first developed. Muka is a dried, ground mixture of leaves (deciduous or coniferous) and very small twigs (6mm maximum) and is given to livestock as a supplement (up to 5% of their diet). This is often made using the debris from logging, but it could also be specially grown from coppiced trees. It has been estimated that a plantation of Willow might produce as much as 12 tons of Muka per hectare annually.

Propagation: Willows are easily propagated vegetatively. Even in the wild cuttings are an important method of reproduction, as the brittle twigs break off in storms and float off downstream to take root anywhere suitable conditions exist. Willows logs used for fenceposts and revetments have been known to sprout and grow into trees.

Propagate the trees while dormant, by simply hammering a 2 to 3 foot long shoot half way into the ground. Take care to plant it the right way up and not to split the top. Smaller shoots can be pushed directly into the soil. If given rich, moist soil and full sun, they grow rapidly.

They can be grown from seed, but this must be planted immediately, as it doesn’t remain viable for very long.

Horticultural uses: Willows are often unpopular with homeowners because they continuously drop branches, twigs and other debris. Another drawback is their tendency to clog drains and ditches, as their roots go searching for water.

Their affinity for water makes them useful for preventing erosion of stream banks and levees and they are often planted for this purpose. They may increase fish populations by providing shade and attracting edible insects. The low shrubby types are best for this, as large trees may dry up small streams in dry summers.

An interesting idea is to grow a coppiced Willow hedge, by planting two rows of cuttings. Plant them 12” apart in the rows, with 36” between the rows. These can be cut every year for basket making materials, or every 3 years for biomass. This gives you a productive summer hedge, which also makes an attractive screen.

Rooting substance: Willows are able to root so easily because they contain a growth promoting substance. Professor Makota Kawase at the Ohio Agricultural station discovered that an effective rooting substance can be prepared by steeping the chopped shoots in water for 24 hours. This was also found to increase the effectiveness of commercial rooting hormones. It is also useful for pre-soaking seeds and for watering seedlings.

Coppice: Willows sprout readily from the stump and were some of the most important species for coppicing. Growing Willow for basket making was once a major industry in Europe. In some parts Willow gardens were almost as common as vegetable gardens. They supplied material for baskets for household use and for sale to provide income. Such a garden can still be profitable today. You could sell the shoots, or make baskets from them and sell those.

If you plant the cuttings 12 inches apart, you can get as many as 20,000 on an acre of land. Once established these may grow 10 – 12 feet in one season and can be cut annually. This is so easy that anyone into basket weaving should grow their own (even if it means planting the cuttings on land you don’t own). See my separate post on coppicing.

Pollarding: In parts of Europe with a lot of livestock Willows in hedgerows were commonly pollarded instead of being coppiced. This consists of cutting the top off the tree, leaving only the trunk, about 6 to 10 feet tall. This would cause the tree to send up a cluster of shoots, well out of the reach of livestock or deer. These shoots could be cut annually just like those from coppiced plants.

Also known as Basket Willow, this is perhaps the best species for basket weaving and was once widely cultivated for this.

This is the other species that is commonly cultivated for basket-making and many cultivars exist (if you can find them).