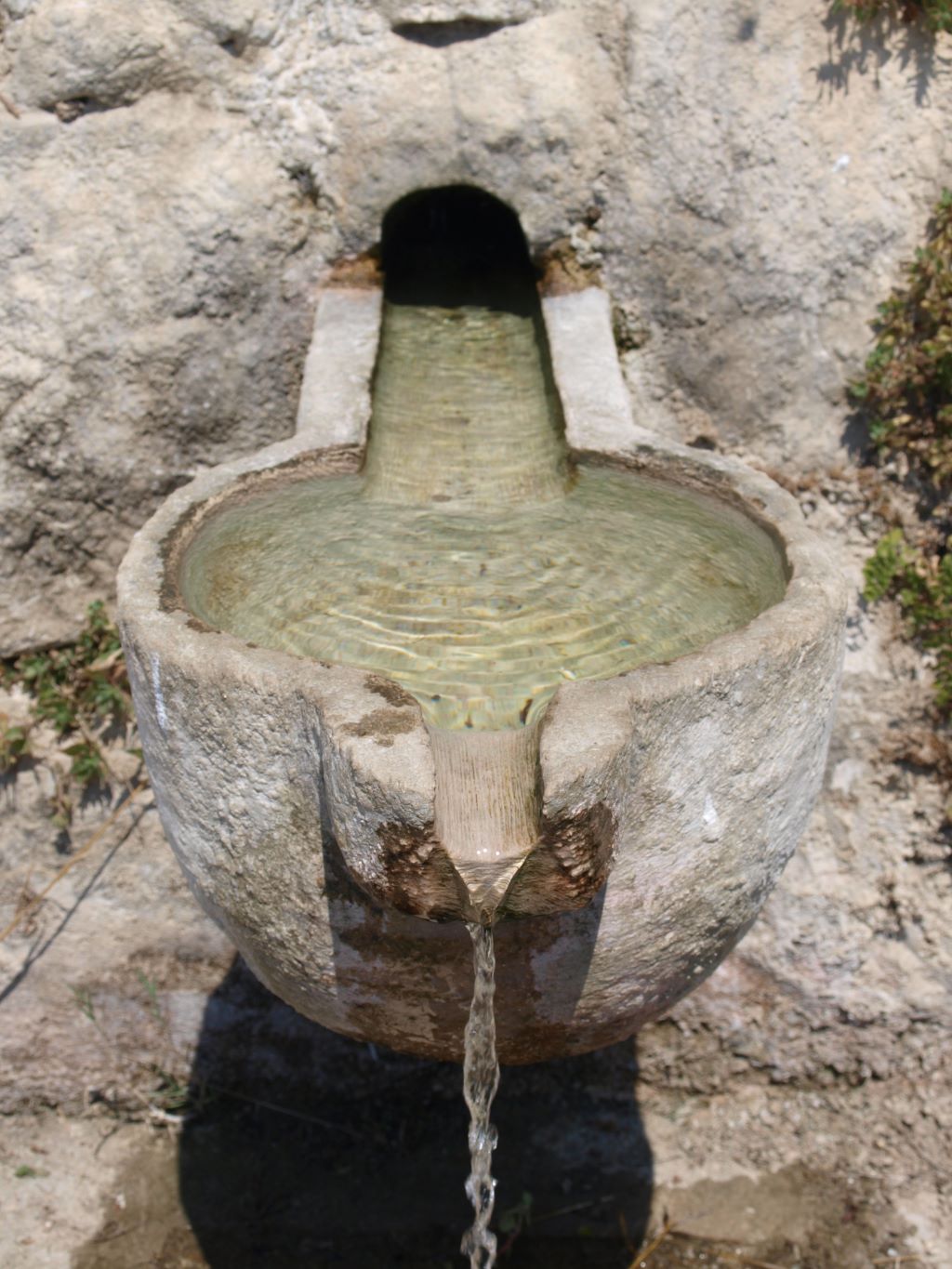 Open water is a unique element, unlike anything else you can put in the garden and you should have at least one water feature of some kind (and preferably more).

Water brings life and increases biological diversity by providing a greater variety of habitats, such as ponds, marshes, bogs and more. This is particularly obvious in dry climates where it becomes a magnet for wildlife. Water attracts nearly everything: dragonflies, frogs, birds and many other creatures (I’ve often been buzzed by Hummingbirds while hand watering). One morning after accidentally running an overhead sprinkler overnight (this was before I invested in a timer) my vegetable garden was alive with dozens on Butterflies.

Water also has an instinctive appeal for humans, especially children. Of course they won’t be satisfied with just looking at water, they find it an irresistible plaything and will want to play with it for hours.

Water can be a hazard to very small children because it is so fascinating to them. They will play around with it until something unexpected happens and have been known to drown themselves in a few inches of water, or even a bucket, so be aware and take precautions (see below).

Water also attracts less welcome visitors such as raccoons (they love to mess about in it as much as children), deer (they like to drink it) and mosquitoes (they like to breed in it). In warm weather Mosquito larvae will appear in any still water that stands around for more than a few days. In such cases you may have to take preventive measures, such as adding Mosquito fish.

Moving water is even more interesting than still water. The problem with moving water is that you often have to make it move, which involves technology in the form of pumps, wiring and electricity. A solar pump or windmill could be enough to supply a trickle of water for a waterfall.

You could also use your well pump (or water mains pressure) to supply moving water. Just turn on the tap and run the water through your pond, bubbling fountain, rill or whatever. You would need a container at the end to catch the water so it can be used in the garden. You might also run it straight to an irrigation system, so that a waterfall or fountain runs whenever you are irrigating (giving a nice connection).

These can take many different forms, depending upon the situation and your needs. Whatever you use will become the focal point of its own area.

Half a wooden whiskey barrel filled with water gives you an instant miniature pond. Its durable  Oak wood and metal construction looks instantly at home anywhere in the garden. Galvanized horse troughs also work well. Old clawfoot tubs have been used as wetland planters and ponds, but unless very decrepit they are probably more useful when used as an outdoor bathtub.

Large open tubs of water were once placed in the garden as a place to quickly fill a watering can. This is much quicker than using a hose, just one dip and its full.

Almost any container can be sunk into the ground to become a small pool. It doesn’t really matter what it looks like because it will be completely hidden. It doesn’t even have to be waterproof as you can line it with pond liner. Plastic containers work very well as they aren’t subject to corrosion or rot (just make sure no part is exposed to sunlight or it will deteriorate.

An advantage of sunken tubs is that the water temperature is more stable because the surrounding earth slows down temperature swings.

One of the smallest ornamental water features (and an attractive focal point) is a bird bath. Birds like the water to be no more than 3” deep and have gently sloping sides and bottom. In hot weather a shallow birdbath may evaporate quickly.

These are perhaps the easiest and simplest water features to create (even easier than barrels) and make a great focal point. All you need is some kind of bowl filled with water and a little imagination. You can increase the reflection of the water by making the interior of the container a dark color.

A water filled bowl will immediately add interest to any area. It could be placed on a table, on the ground, in a shady spot, in full sun to reflect light, or on a patio or deck. They can even be moved around the garden as you see fit. To impress visitors you can float flowers on the surface. They won’t last long but are very pretty.

Any attractive waterproof container will work for this, though it should be compatible with the house and garden. It could be a large terra-cotta plant pot with the drainage hole filled up with caulk. It could be a basin carved from stone (expensive) or some form of cast concrete (see Concrete carving). Ideally it should be dark inside to better reflect the light. At its simplest it could be just an old garbage can lid, buried to its rim and covered with a layer of pebbles.

You can even grow water plants in these bowls. This could be a Water Lily for beauty or Watercress for edibility. You might even have a series of planted water filled pots.

All small and shallow containers need some looking after. In hot weather they warm up and evaporate quickly, while in cold winter weather they can freeze solid. If this could damage the container you should empty it and cover it (to stop it filling back up with rain), or just take it inside for the winter.

These fairly formal ponds are often incorporated into a patio or deck. If you only have room for a small pool then this type will probably work best. It’s hard to make a very small pool look natural anyway.

It’s pretty easy to build a raised formal pond. Use concrete blocks on top of a poured foundation, or even railroad ties. Use a pond liner to make it watertight and cover the top with stones or wide boards to hide it. Maybe make it 16” tall and use the edge as a seat.

Bubbling water makes such a nice kinetic sculpture, it may even justify using electricity to pump it. You can use almost anything for a bubbling fountain, all it takes is a little imagination. Old millstones were popular in English cottage gardens as an interesting focal point, but this was because they were laying around in the undergrowth. If you have to buy one it is quite a different matter. Better to use something you can salvage instead.

Fountains are beautiful, especially when sunlight glints off of the moving water. They also sound nice and are often used in urban gardens to mask the sound of the city. They were once widely used in desert gardens because they humidify and cool the air.

If you really want a fountain there are plenty of commercial offerings out there, or you can make your own out of plumbing fittings and imagination. Something as simple as a large ceramic pot can be good. Bamboo culms could be used as a spout, if you want a Japanese effect. A brass tap makes a cheap fountain. Some fountains get really elaborate, but they probably don’t belong in this type of garden.

Wall fountains can work well in small gardens. They don’t have to move a lot of water, a small trickle will supply the requisite splashing water sound.

Water is such a powerful element that it enhances anything it is combined with. A variety of sculptures or other ornaments might go in the water, might use water, or might just be affected by water. Tiles, glass, rock and pebbles all look better when wet and can be used to ornament any water feature.

These were traditionally used in Japan to lead water from gutters to the ground. They aren’t quite as efficient as downspouts for capturing rainwater, but they are far more interesting and come alive in the rain. Linked rain chains are the cheapest and easiest to make, but the cup type is more effective and splashes less. All work best on houses with wide eaves. Rain chains can be anchored at the base and end in an earthenware pot (or other container), or be free hanging.

These aren’t much different from other container plantings, except you don’t have to water them nearly as often (and they use more water). They work great as ornamental features for the patio or deck.

You can use tall and striking plants like Cattail, Reed or Bulrush, shorter plants such as Arrowhead, floating plants such as Water Lilies and various marginal plants. In a large container you may have to put your plants on concrete blocks or bricks to bring them up to the right level in the water.

A bog garden provides a unique habitat for moisture loving plants and enables you to grow yet another set of edible plants. These grow rapidly in warm weather and can provide you with a lot of food.

The easiest place to put a bog garden is at the edge of a pond, where excess water overflowing from the pond will help to keep it moist. It can be simply an extra depression at the side of a pond, lined with pond liner and filled with soil (this should be high in organic matter). The water level can be allowed to fluctuate from being merely moist soil to being under an inch or so of water. The bog should be lower than the pond so nutrient laden water doesn’t drain back into the pond.

Creating a separate bog garden is quite similar to building a pond. Excavate the soil to make a hole 15 inches deep and as large as you choose, then line it with pond liner. You don’t need to use an expensive pond liner in this case, heavy duty plastic sheeting will work, because it will be completely buried and so is never exposed to damaging sunlight. It is normal to put some holes in the liner for drainage (to prevent stagnation. In gopher country you should also lay down gopher wire underneath the liner, otherwise these creatures will eventually feast on your succulent plants (this happened with my first attempt). Put 2 inches of gravel over the liner and then and lay down an old soaker hose to supply water when necessary. The soil is then returned to the bog, along with plenty of organic matter. If necessary use a mulch to reduce surface evaporation.