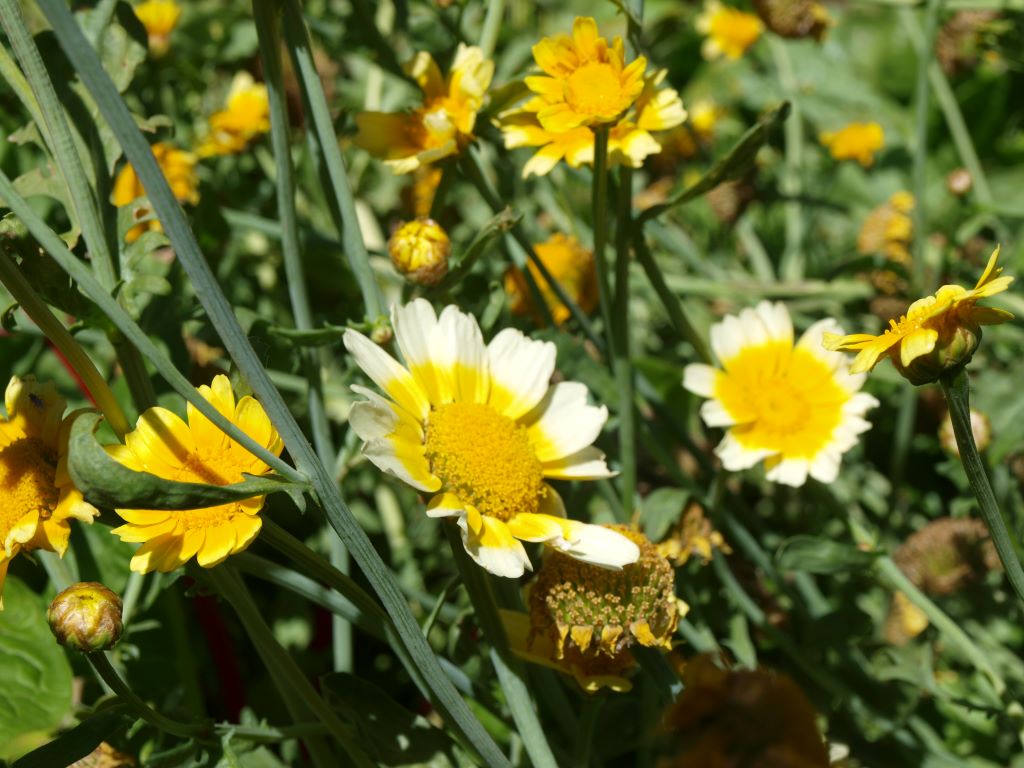 Introduction: Shungiku is actually a species of Chrysanthemum (it is sometimes called Garland Chrysanthemum), though not a very showy one. It is native to the Mediterranean, where it is known as crown daisy, but it is only commonly used for food in Asia (how it got there must be an interesting story, but I don’t know it). It has a nice aromatic, almost floral flavor that goes great in salads. You don’t need a lot of plants as it is quite strongly flavored.

Climate: In its native Mediterranean shungiku is a late winter / spring flower. It grows best at a mild temperature of 60 – 70°F. Hotter temperatures usually cause it to bolt fairly quickly. It will tolerate light frost.

Nutritional value: Like most leafy greens it is high in vitamins, including A, B1, B2, B6, C, K and folate. It is also rich in minerals including calcium, phosphorus and potassium, as well as various beneficial antioxidants.

Ease of growing: Shungiku isn’t a very demanding plant and is pretty easy to grow. The only problems I have had is with its unseemly haste to flower when the weather warms up.

This weed-like annual does well in most soil types, but (as usual) it gets bigger and more succulent in rich, well-drained, moisture retentive soil.

Where: Shungiku will be most productive in full sun, but in warmer climates it will benefit from light shade during the hottest part of the day.

Transplants: Shungiku isn’t usually started indoors because it is quite hardy and germinates well in cool soil, but it is easy enough to do. It doesn’t mind transplanting so you can use flats or cell packs.

Direct sowing: Plant the seed ¼ – ½˝ deep and 1 – 2˝ apart, to be thinned to the desired spacing later.

Beds: When growing in beds space the plants 4 – 6˝ apart.

Succession sowing: The plants aren’t very long lived, so you may want to plant every 3 – 4 weeks to ensure a continuous supply.

Feeding: Plants may benefit from an occasional foliar feed to keep them growing rapidly.

Frost protection: Shungiku tolerates light frost, but will need protection from harder ones.

Pests and disease: I can’t remember ever having a problem with it. In fact the plants attract beneficial insects to the garden.

You can harvest thin whole plants until you get to the final spacing and then start picking leaves individually (take single leaves from a number of plants and they won’t even notice). Gathering regularly may delay flowering. Pinch out any flower shoots as they appear (they are edible too, so don’t just throw them away).

You can also harvest by cutting off the entire top of the plant, leaving a couple of inches of stem to regenerate. It should re-grow a couple of times before it will need replacing.

Seed saving: Shungiku produces seed readily if allowed to flower (somewhat too readily actually). You probably don’t have to worry about keeping a variety pure because there are so few of them. Just cut the ripe seed heads and dry them in a paper bag.

Ornamental: This species is occasionally grown in the ornamental garden for its small, daisy-like yellow flowers.

Shungiku is sometimes sold under the name chop suey greens, garland chrysanthemum and tong ho (its Chinese name). There aren’t many varieties and usually you see the fern leafed type, which closely resembles the wild plant. However there is also a broad leafed type too, which is said to be somewhat more refined and better flavored.

This species adds an interesting flavor to salads and I like it a lot. Apparently it has also been cooked as a potherb or braised, but I haven’t tried this.

The edible flower petals (not the whole flower) can be added to salads.