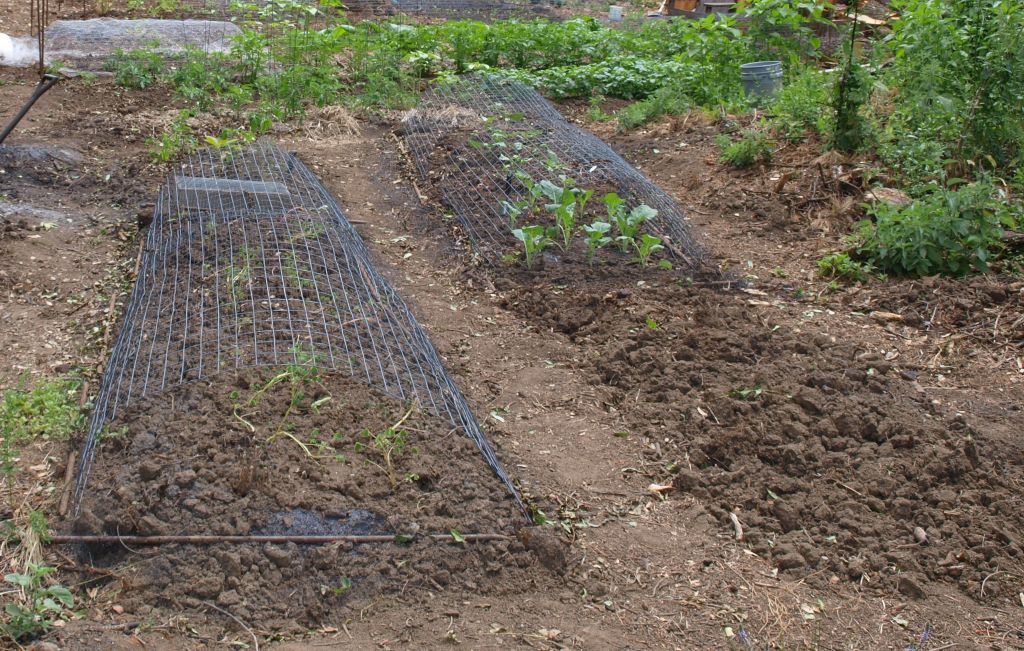 This is the best known, most thorough and effective way to prepare beds and appeals to the methodical kind of person, someone who likes order and science (and is also fairly physically active). It loosens the soil down to a depth of 24˝ or more, which has a number of beneficial effects:

•      It aerates the soil deeply and so increases the activity of soil life and the subsequent release of nutrients.

•      It allows you to enrich the soil to a much greater depth than normal (effectively making the topsoil deeper). This means you can grow plants closer together, thus obtaining higher yields from a given area. This is one of the keys to intensive cultivation.

•      It improves drainage and hastens the warming of the soil.

•      It is the most effective way to deal with compacted soil layers.

•      It enables you to maximize inputs of fertility for the most highly intensive food production possible.

The annual cultivation puts extra air into the soil and so stimulates the growth of decomposing organisms in the soil. These make additional nutrients available from organic matter.

Double digging can be hard on the soil in that the repeated disturbance damages soil structure, destroying the tunnels created by worms and often inverting soil. Earthworms don’t like it, as it disturbs and may physically injure them.

The additional air in the soil speeds up the decomposition of organic matter, so you must add more annually to prevent this becoming a problem.

There is some debate as to whether double digging is really worth the effort. Some people point out that in a rich soil, most of a plants feeder roots will be in the top 6 – 12” of soil and say that it isn’t really necessary to dig any deeper than that. However research has shown a definite increase in yields after double digging, an effect that lasted for several years. This is mainly because roots were able to penetrate more deeply in search of water in times of drought (double digging is of great value in dry areas).  The increased oxygenation may also increase mineralization and so make plant nutrients more available.

Whether it is worthwhile to double dig largely depends upon you and your soil. It is most valuable on heavy or compacted soils (those that are hardest to dig), as it opens them up and allows you to get organic matter down deep. Light soils can also benefit in that it allows you to incorporate organic matter deeply, but they are usually already well aerated.

Though your vegetable garden might benefit from an initial double digging, you don’t usually need to do it routinely. It would not only be a waste of time and energy, but may even have some negative effects on earthworms and other important soil organisms. I haven’t double dug a garden for years because the topsoil in my present garden is loose, very deep and fertile.

If you are unsure about whether double digging is really necessary, you could try an experiment. Prepare one bed by double digging and another by your favored alternative and plant the same crop at the same end of both beds. Then watch  how they perform over the growing season. This will give you a better idea as to whether it is worthwhile than anything I could say.

How to double dig

The tools for the job

Double digging is hard enough without trying to do it without the right tools, so make sure you have a good sharp digging spade and a strong garden fork with handles that are long enough to be comfortable. In heavy soils you might use the fork for double digging in preference to a spade (ideally a flat tined spading fork). See Tools for more on these).

In difficult soils, double digging a large area can seem like a monumental task. Expect to take four hours to dig a bed 4 feet x 25 feet, though you could do it in half that time (or less) if you are strong and experienced.

1) Start double digging by digging a trench 10 – 12˝ deep by 18 -24˝, wide and the breadth of your bed. If you are only digging one bed put the soil from this trench into a wheelbarrow and take it to the other end of the bed (you will use it to fill in the last trench). If you are digging more than one bed simply put it to one side and use it to fill in the last trench on the next bed (start that one from the opposite end). Remove any roots, large rocks and perennial weeds as you go (be thorough as this is important).

Some people double dig from the side to avoid compacting the soil, or they stand on a digging board (a piece of ¾˝ plywood 2˝ x 4˝). You can also just stand on the bed, as it’s going to be dug anyway.

2) Put a layer of organic matter (fresh or aged strawy manure, compost, inverted sod or surface skimmings) in the bottom of the trench. This is a good place to use immature compost, or manure with lots of weed seeds, as it will be buried too deeply to present a problem. Put some rock powders in there too (especially colloidal phosphate).

3) Next use your fork to loosen the soil in the bottom of the trench. Make deep cracks 10 – 12˝ deep every 3 – 4˝ all the way across the trench. Don’t pulverize the soil to a fine tilth, or it may compact again more quickly.

4) Start the next trench alongside the first, by sliding spades full of earth across to fill in the first trench. Try to keep these fairly intact, you don’t want them to fall apart. Also take care not to invert them, as subsoil is much inferior to topsoil for plant growth. This can be a little tricky initially, but you will soon learn how to slide, lever and flip the soil from one section to the next. In sandy soils the spades full of soil tend to break apart, unless they are quite moist. In heavy clay soils you may have to break up the large clods with the side of the spade, otherwise they may dry out into hard lumps. The addition of lots of organic matter will eventually alleviate both of these problems.

If you invert the soil, putting topsoil underneath and subsoil on top, you are “Bastard Trenching”, presumably done to make the topsoil deeper?

5) Repeat these operations on down the bed. When you get to the end of the bed, fill it in with the soil from the wheelbarrow (or from first trench of the adjacent bed).

Keep the edges of the bed straight, otherwise plants at the edge of the bed may end up growing into compacted soil. Compensate for any unevenness in the bed as you dig, by moving extra soil around as necessary, filling in low spots or cutting down high ones. If you do this well the bed should be quite level when you finish, and should have a fairly fine tilth that needs little further work. If the bed is very uneven you should rake soil from high spots to fill in the low ones (use a wheelbarrow if there’s a lot to move).

When you finish digging, skim loose topsoil from the paths (leave the subsoil) and throw it onto the beds. If the beds are already high enough then don’t bother with this.

The initial establishment of a raised bed garden is quite a lot of work, especially if you intend to double dig many beds. In difficult soils, double digging a large area can seem like a monumental task. Expect to take four hours to dig a bed 4 feet x 25 feet, though you could do it in half that time (or less) if you are strong and experienced. Fortunately there are ways to reduce the work (and the stress on your body) to manageable proportions.

•      Don’t exert yourself any more than you would in your everyday life, or try to do too much at once. This is especially important in spring when your muscles have weakened from winter inactivity (this is the commonest time of year for injury). If you have any medical problems I suggest you avoid double digging altogether, as it is strenuous.

•      Double digging is hard work, but it can be enjoyable if you work slowly and carefully. Dig only a small section at a time (perhaps 30 minutes a day), resting as necessary. I am fairly fit and strong and I find the repetitive hard labor of double digging quite therapeutic in small doses. More like a combined exercise and meditation than an unpleasant chore.

•      Break yourself in slowly and you will soon be able to double dig from dawn to dusk (or even dusk to dawn if you are particularly gung ho).

•      Don’t strain yourself by picking up more soil on your spade than you can comfortably lift. Two small loads are a lot less stressful than one big one. You should also understand how your body works, even the strongest people can injure themselves through poor body mechanics. Bend your knees when lifting, rather than bending from the waist (I admit this is one I have never quite got the hang of). Use your strongest hand to hold the bottom of the spade (where the weight is) and use your weakest arm to counterbalance and maneuver it around.

•      Dig efficiently. Jump on to the spade and use the weight of your body to push it into the ground, rather than trying to use your arms and back. Use your heel or the middle of your foot to press down on the spade. Learn to lever and slide the spades full of soil into position rather than lifting them (they break up less and it greatly reduces back strain). Push your spade (or fork in heavy soil) into the ground vertically for deepest penetration.

•      If you have enough time you could plant deep rooted cover crops for a season to loosen the soil before digging (see below). This is a good argument for establishing the garden incrementally, over several years.

If you are not very strong and fit, you may want to spread this digging over several years, doing 1 or 2 beds each year.