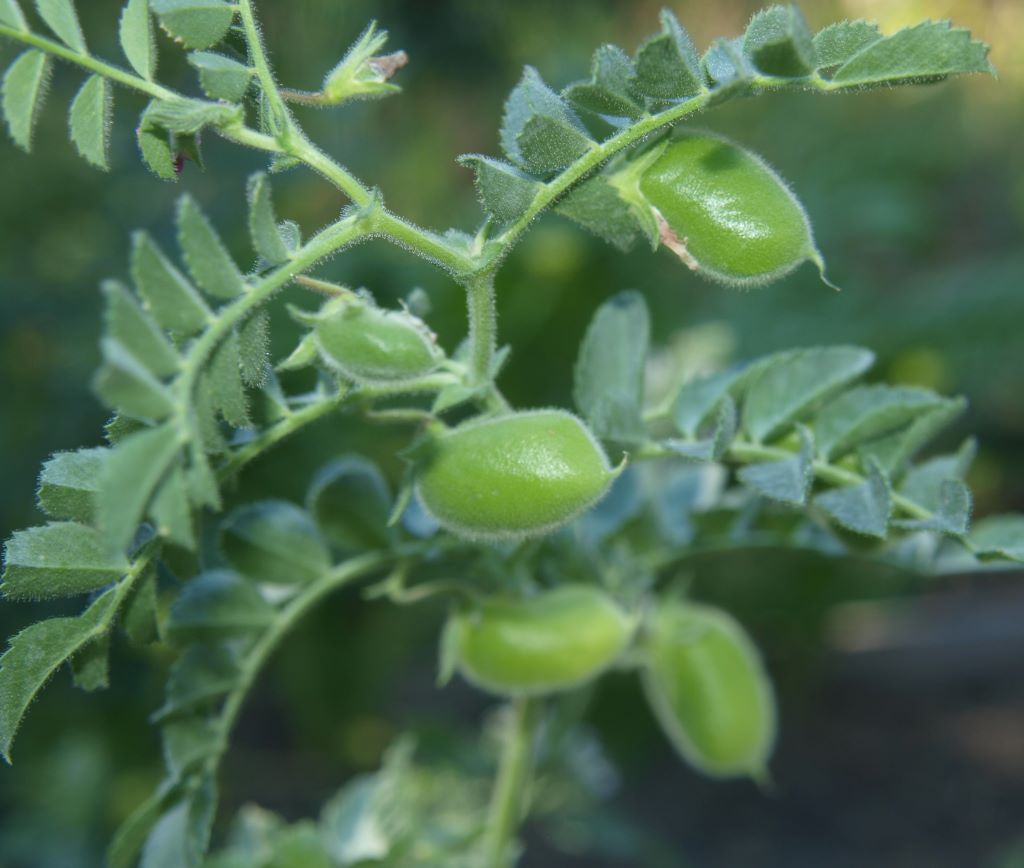 Introduction: The common names are somewhat misleading as this plant isn’t closely related to either the pea or bean. It is believed to have originated in the Middle East and has been grown there for over 7000 (it no longer even exists as a wild plant). India is by far the biggest producer of chickpeas in the world.

Crop use: Chickpeas are grown for their tasty and highly nutritious protein rich seed. Like the related beans and peas they host nitrogen fixing bacteria and so enrich the soil they grow in. These features make chickpea potentially a valuable crop, but they aren’t very productive, or cost effective if you compare the cost of a pound of beans against the space needed to grow them. I would consider them more of a crop for people who have lots of space and are aiming for food self-sufficiency, or who are simply adventurous in the garden (I use that term fairly loosely).

Like most beans they are high in protein. They are also rich in folate, iron, manganese, phosphorus and zinc. They are very high in calories, with around 1630 per pound.

Chickpeas are also very rich in various beneficial antioxidants and phytonutients. The smaller, darker seeded, desi types are particularly rich in these.

Like other beans they are also rich in fiber, but of a particularly beneficial type. This may help to lower cholesterol levels and may even reduce the risk of colon cancer

Chickpeas require a warm and fairly long growing season and don’t like wet weather or cold nights. The ideal climate is dry in late summer when the pods are developing, as they are prone to rot when they get wet. Established plants can tolerate dry conditions. Unlike most beans they can also tolerate some frost and are said to be as hardy as peas.

Chickpea will grow in most soils. It doesn’t have to be highly fertile as the plant fixes its own nitrogen, but it should be well-drained.

Soil preparation: Incorporate 2˝ of compost into the top 6˝ of soil. They don’t need a lot of nitrogen, but do like potassium and phosphorus, so you might want to give them wood ashes and colloidal phosphate.

Where: For maximum production the plants should have full sun, as any shade will reduce the harvest.

In very hot areas they may benefit from a little afternoon shade. They are usually rotated with other legumes.

When: Chickpea can be planted earlier than beans because they can tolerate cooler temperatures. However the seed may rot if the soil is too cold, so plant no earlier than two weeks before the last frost date.

Inoculating: For maximum nitrogen fixation you should inoculate your seeds with a suitable chickpea inoculant (this isn’t the same as a pea or bean inoculant). If you grow them fairly regularly (every 3 years or so) you won’t have to inoculate again, as the bacteria can survive in the soil for that long.

Using transplants: Chickpeas require a fairly long growing season, so they are sometimes started indoors This gives them a head start and is also a good way to foil hungry birds and rodents.

Chickpeas don’t really like transplanting, so use soil blocks or cell packs to avoid disturbing their roots. If germination is likely to be poor, plant 2 seeds per cell and thin to the best one when both have germinated. If you think it will be good then just put one seed in each cell.

Plant the seedlings out when they are 4 – 5˝ high. If the weather is cool you will have to harden them off first.

Direct sowing: Sow the seed 1 – 2˝ deep, a couple of weeks before the last frost.

Beds: Space the plants 4 – 6˝ apart (depending on soil fertility). The plants don’t mind fairly close spacing, as they help to support each other.

Weed: The young plants need regular weeding until they cover the ground fully. It’s best to weed by hand, as their roots are quite near the surface and are easily damaged.

Fertilizing: Chickpeas are a fairly long season crop and if your soil is poor they might benefit from a side dressing of compost in mid season (or the occasional feed of compost tea).

Water: Established plants are quite drought tolerant, but for maximum productivity you should keep the soil moist. This is particularly important in hot weather and especially when the flowers are opening and setting pods.

Chickpeas are notoriously vulnerable to rot and various fungus diseases when they get wet, especially when the pods start to develop. Try not to get the plants wet when watering (drip is best) and don’t even touch wet leaves (obviously rain is bad too).

Pests: Quite a few insects enjoy chickpeas, including aphids, bean beetles, flea beetles, leafhoppers and mites. In my garden something (I suspect rodents, but it could also have been birds) actually ate the ripening seeds out of the pods.

I read somewhere that the plant can secrete malic acid onto the leaves to protect them from pests. Apparently this can irritate the skin, though I can’t say I have noticed.

When: The flowers (and subsequently pods) start to appear about 60 days after planting. The pods are quite small and contain 1 – 3 beans. They can be eaten when green like snap or shell beans and in cool, short, wet growing conditions this may be as far as you get. More often they are allowed to ripen fully and picked dry. If the weather is wet you need to get them indoors as soon as possible (for reasons I already mentioned).

How: When the pod bearing plants begin to die back and turn brown, bring them indoors to a warm, dry, well aerated place to dry fully (an old screen door works great). A fully dry chickpea is hard and will shatter if hit with a hammer.

Storage: Store the fully dry beans in a rodent proof container in a cool, dry place. They should last for several years.

Seed saving: The flowers are perfect (have male and female parts) and self-pollinating, though they are also commonly cross-pollinated by bees. Saving seed is pretty easy because that is what you are growing them for.

You rarely see chickpea seed for sale to gardeners as it is more of a field scale crop. There are two basic types

Kabouli: These include the familiar types you see in salad bars out of a can. They tend to be bigger and rounder and often have tan skins.

Black Kabouli – This is the most available of these varieties in this country. As the name suggests it has a black skin.

Desi: These are smaller and darker and are often used for flour, or split for cooking like lentils.

Chickpeas are used in a variety of ways, but they are best known for making hummus and falafel (see Fava Beans for a recipe for the latter). They can also be used like soybeans for making tofu and “milk”. In India it is ground into flour (known as gram flour) which is commonly used for cooking.

The beans are soaked and cooked in the same way as other dry beans. They take 1 – 1½ hours to cook thoroughly.